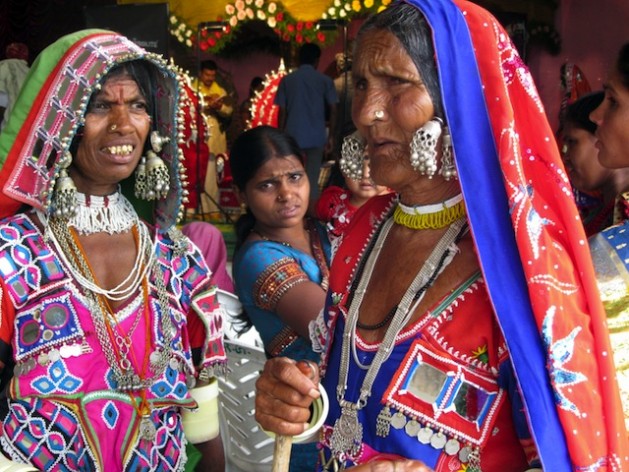 Lambada women, who never went to school, now keep vigil over young girls in the community. When a child stays away from the classroom for too long, they sound the alarm against possible child labour or trafficking. Credit: Stella Paul/IPS

CHANDAMPET, India, Jan 26 2015 (IPS) - At 11 years of age, Banawat Gangotri already has four years of work experience as a farm labourer. The child, a member of the nomadic Lambada community from the village of Bugga Thanda in India’s southern Telangana state, plucked cotton and chillies from nine a.m. until 5 p.m. for about a dollar daily.

Every day, her father collected her earnings, and spent it on alcohol.

“If there is nothing to eat and no land to grow food, what options do we have but to send our children out to earn?” -- Khetawat Jamku, a 50-year-old Lambada woman from the south Indian state of Telangana
In mid-January, however, the cycle was broken. Hours before her father took her to Guntur, a chilli-producing district 168 km away, Gangotri was rescued and brought to a residential school in the neighbouring block of Devarakonda, where she is now enrolled in the fourth grade.

A local non-profit called the Gramya Resource Centre for Women (Gramya) runs the school. It also mobilizes the Lambada people against child trafficking, child abuse and infanticide, all frequent occurrences in the community.

The school currently has 65 children like Gangotri – rescued either from child employers or human traffickers.

“I like school,” Gangotri tells IPS. “When I grow up I’ll be a teacher.”

It is a simple dream, but it is more than most girls from her background can hope for: Gangotri’s is one of just 40 villages across the country to have a Child Protection Committee, a 12-member community vigilante group that acts against trafficking and forced child labour.

Trained by Gramya in children and women’s rights, this committee keeps a hawkish eye on school-aged girls in the village. If a child doesn’t attend school for a few weeks, they sound the alarm: a long absence usually means the girl has either been employed, or married off.

Still, some manage to slip away. The day Gangotri was rescued, Banawat Nirosha, a 12-year-old girl from the Mausanngadda village, went missing. Villagers soon find out that her landless farm-worker parents had left to work as chilli pickers in Guntur, taking along Nirosha – an extra pair of earning hands.

Though the parents are expected to return after March, when the chilli-harvesting season is over, there is a possibility that Nirosha could be married off in Guntur, villagers tell IPS.

Curbing the killing and sale of daughters

While stories like these are common, the vigilante group tells IPS that things have significantly improved in the village, where female infanticide and trafficking of young girls was rampant just 20 years ago.

In March 1999, following the rescue of 57 Lambada infants from a trafficking ring in Telangana’s capital city Hyderabad, police investigations revealed that between 1991 and 2000, some 400 babies from the region were bought and sold under the banner of adoption, though activists fear they most likely ended up as labourers, or entered India’s thriving commercial sex trade.

And in a country where three million girl children are thought to be “missing” each year due to sex-selective abortions and infanticide, children from the Lambada community face a double risk.

In an interview with IPS, Hyderabad-based social activist Rukmini Rao, who founded Gramya in 1997, recalls some of the horrors she has faced in her work, including preventing infant twins from being killed by a family already struggling to support four daughters in a village in Telangana.

Stunned, she and a colleague undertook a study, which found the male-female ratio in the village in question to be 835 female children to every 1,000 males.

Today, thanks to rising awareness and strict community vigil, the sex ratio in the district stands at 983, well above India’s national average of 941 girls for every 1,000 boys.

But activists have a long way to go. In a country where 50 percent of the tribal population lives below the poverty line, surviving on less than a dollar a day, preventing Lambada families from killing or selling their children is an uphill battle.

Suma Latha, a coordinator of Gramya with 14 years of experience in training Lambada women as child rights’ activists, tells IPS that expecting mothers often travel to Hyderabad where they sell their day-old infants for a few thousand rupees, later explaining to the village that the child had died at birth.

“The sale is always against the will of the mother, arranged by the father and the mother-in-law,” Latha says, adding that when Gangotri was rescued, her father had offered to “give away” the girl for 15,000 rupees (about 250 dollars).

With their light-skinned complexions and hazel eyes, Lambada children are very much in demand to fill a growing adoption market, with childless couples hailing mostly from the cities willing to pay handsomely for a beautiful baby.

While some of these children may in fact end up in caring homes, others almost certainly fall into the hands of sex traffickers.

“The middle men who buy babies […] are moved by money not morality,” says Lynette Dumble, a Melbourne-based medical scientist who has studied female infanticide across India for over two decades. “So if the sex traffickers are offering more […] the girls will be sold to them.”

Statistics and records gathered by numerous organisations reveal that Hyderabad, the city closest to the Lambada villages, is a growing hub of sex trafficking.

According to B. Prasada Rao, the director-general of police for the state of Andhra Pradesh, which border Telangana, in 2013 the police had arrested 778 traffickers and rescued 558 victims including minors.

Although this represents only a small part of India’s estimated 30-43 billion-dollar child sex trade, it has activists here seriously concerned about young girls in the community.

Keeping vigil is important, but so too are longer-term solutions designed to tackle the problem at its root.

But this alone will be insufficient to completely stop the practice of infanticide or the sale of children.

Government data indicates that 90 percent of India’s tribal population is landless. In the Nalgonda district of Telangana state, where Gangotri’s father scratches out a living on the margins of existence, 87 percent of all tribal communities are landless.

If the land does not yield enough for subsistence, families will inevitably look elsewhere for their livelihoods.

“If there is nothing to eat and no land to grow food, what options do we have but to send our children to earn?” demands Khetawat Jamku, a 50-year-old Lambada woman.

Experts like Rao say that proper implementation of programmes like the Mahatma Gandhi Rural Employment Scheme – designed to provide 100 days of work for 147 rupees (about three dollars) a day to the rural poor – could act as an important deterrent to child labour or trafficking.

But such schemes are weighed down by corruption and mismanagement, leaving a gap that NGOs and civil society are forced to fill, through self-help and community mobilization efforts.

Until Lambada women are given equal rights to land, she contends, it will be very difficult to end the cycle of poverty and violence that puts children at grave risk.