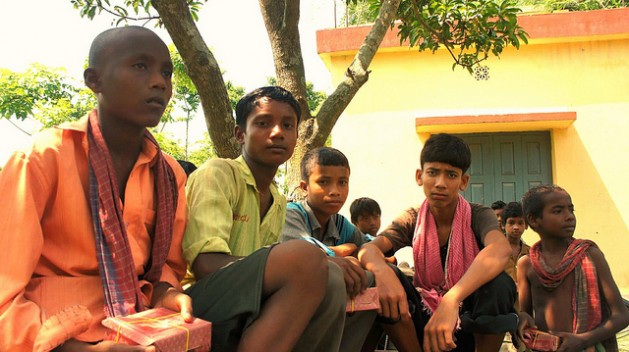 THIRUVANANTHAPURAM, India , Sep 4 2014 (IPS) - In a country where well over half the population lives on less than two dollars a day, it takes a lot to shock people. The sight of desperate families traveling in search of money and food, whole communities defecating in the open, old women performing back-breaking labour, all this is simply part of life in India, home to 1.2 billion people.

But amidst this rampant destitution, some things still raise red flags, or summon collective cries of fury. Child trafficking is one such issue, and it is earning front-page headlines in states where thousands of children are believed to be victims of the illicit trade.

The arrest on Jun. 5 of Shakeel Ahamed, a 40-year-old migrant labourer, by police in the southern state of Kerala, created a national outcry, and reawakened fears of a complex and deep-rooted child trafficking network around the country.

Ahamed’s operation alone was thought to involve over 580 children being illegally moved into Muslim orphanages throughout the state.

“Many families are unable to afford the basic necessities of life, which forces parents to sell their children. Some children are abandoned by families who can’t take care of them. Some run away to escape abuse or unhappy homes. Gangsters and middlemen approach these vulnerable children." -- Justice J B Koshy, chairperson of the Kerala Human Rights Commission
Experts tell IPS that children are also routinely trafficked to and from states like Andhra Pradesh, Bihar, Karnataka, Uttar Pradesh, Maharashtra, Madhya Pradesh, Rajasthan, Jharkhand, Karnataka, Chhattisgarh and West Bengal.

According to the National Crime Records Bureau (NCRB), child trafficking is rampant in underdeveloped villages, where “victims are lured or abducted from their homes and subsequently forced to work against their wish through various means in various establishments, indulge in prostitution or subjected to various types of indignitiesand even killed or incapacitated for the purposes of begging, and trade in human organs.”

It is not clear how many of these “missing” children are victims of traffickers; a dearth of national data means that experts and advocates are often left guessing at the root causes of the problem.

NGOs and government agencies often cite contradictory figures, but both are agreed that a child goes missing roughly every eight minutes in the country.

Human rights watchdogs say there are many contributing factors to child trafficking in India, including economic deprivation. Indeed, the 2013 Global Hunger Index ranked India 63rd out of 78 countries, adding that 21.3 percent of the population went hungry in 2013. According to the World Bank, 68.3 percent of Indians live on less than two dollars a day.

“Socio-economic backwardness is a key factor in child trafficking,” Justice J B Koshy, former chief justice of the Patna High Court and chairperson of the Kerala Human Rights Commission, told IPS, adding that a political-mafia nexus also fueled the practice in remote parts of the country.

“Many families are unable to afford the basic necessities of life, which forces parents to sell their children,” Koshy stated. “Some children are abandoned by families who can’t take care of them. Some run away to escape abuse or unhappy homes. The gangsters and middlemen approach these vulnerable children. In some cases, good-looking girls are taken away by force.”

An action research study conducted in 2005 by the National Human Rights Commission (NHRC) found that a majority of trafficking victims belonged to socially deprived sections of society.

It is estimated that half of the children trafficked within India are between the ages of 11 and 14.

Some 32.3 percent of trafficked girls suffer from diseases such as HIV/AIDS, sexually transmitted infections (STIs) and other gynaecological problems, according to a 2006 report by ECPAT International.

This is likely due to the fact that most girls are trafficked for purposes of sexual exploitation.

A government-commissioned study conducted in 2003, the last time comprehensive data was gathered, estimated that the number of sex workers increased from two million in 1997 to three million in 2003-04, representing a 50-percent rise.

Many of these sex workers are thought to be girls between the ages of 12 and 15.

Sreelekha Nair, a researcher who was worked with the New Delhi-based Centre for Women’s Studies, added that parents coming from poor socio-economic conditions in remote villages sometimes readily hand over their children to middlemen.

Some parents have been found to “sell their children for amounts that are shockingly worthless,” she told IPS, in some cases for as little as 2,000 rupees (about 33 dollars), adding, “law and order agencies cannot often intervene in the private matters of a family.”

Rajnath Singh, home minister of India, told a group of New Delhi-based activists headed by Annie Raja, general secretary of the National Federation of Indian Women, that a central agency would conduct a probe into the mass trafficking of children from villages in the Gumla district of the eastern state of Jharkhand over the past several years.

The group had brought it to the attention of the minister that thousands of girls were going missing from interior villages in the district every year, while their parents claimed ignorance as to their whereabouts.

Raja told reporters in New Delhi this past Julythat developmental schemes launched by individual states and the central government often fail to reach remote villages, leaving the countryside open to agents attempting to “sneak teenage girls out of villages.”

Experts point out that implementation of the 1986 Immoral Traffic Prevention Act remains weak. Many believe that since the act only refers to trafficking for the purpose of prostitution, it does not provide comprehensive protection for children, nor does it provide a clear definition of the term ‘trafficking’.

Dr. P M Nair, project coordinator of the anti-human trafficking unit of the United Nations Office on Drugs and Crime (UNODC) in New Delhi and former director general of police, said that investigations should focus on recruiters, traffickers and all those who are part of organised crime.

The ‘scene of crime’ in a trafficking case, he said, should not be confined to the place of exploitationbut should also cover places of transit and recruitment.

“Victims of trafficking should never be prosecuted or stigmatised,” he told IPS. “They should be extended all care and attention from the human rights perspective. There is a need for the mandatory involvement of government agencies in the post-rescue process so that appropriate rehabilitation measures are ensured” as quickly as possible, he added.

NGOs like Child Line India Foundation help provide access to legal, medical and counseling services to all trafficked victims in order to restore confidence and self-esteem, but the country lacks a coordinated national policy to deal with the issue at the root level.

Experts have recommended that the state provide education, or gender-sensitive market-driven vocational training to rescued victims, to help them reintegrate into society, but such schemes are yet to become a reality.