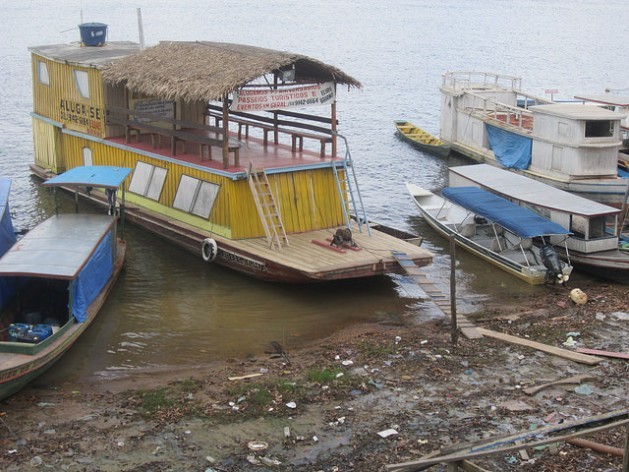 A tourist boat anchored in the Xingú River in the northern Brazilian state of Pará. The lack of wharves, loading docks and many other services must be addressed if tourism is to represent a real alternative to ease the economic and employment impact of the end of the construction of the huge Belo Monte hydropower dam. Credit: Mario Osava/IPS

ALTAMIRA, Brazil, Jul 3 2015 (IPS) - Some argue that the sustainable use of biodiversity is the best alternative for local development in the area surrounding the enormous Belo Monte hydroelectric dam, now that the construction project is entering its final phase on the Xingú River in Brazil’s Amazon jungle.

“The wealth of the forest and traditional knowledge are the future of the region, if they are supported by new forms of financing and technological development,” said Marcelo Salazar, the local coordinator of the non-governmental Socioenvironmental Institute (ISA).

“There is still forest cover in 90 percent of that area, and the rainforest offers food, rubber, medicinal and cosmetic products, besides the tourism potential, with the knowledge of 11 indigenous groups and many ‘extractive’ workers (who harvest jungle fruits and nuts or collect rubber, for example),” he told IPS.

The dam will not be finished until 2019. But 80 percent of the structure will be complete by 2016. The last few years of work will involve the assembly of the giant turbines that generate electricity, a task that only requires a small workforce.

As a result, tens of thousands of workers will lose their jobs, and economic depression will once again be felt in some of the 11 municipalities under the influence of the Belo Monte dam, especially Altamira, the main city along the Xingú River and the Trans-Amazonian highway.

Altamira already experienced something similar when sawmills closed down en masse at the start of the campaign against illegal logging in 2005, leaving some 5,000 people out of work. The economic effects in this city of 80,000 people were devastating.

The city was still caught up in that crisis when the 11,000-MW dam began to be built in 2011, and thousands of workers, mainly from other parts of the country, were hired.

Now the area is preparing for an even more severe impact, because not only will unemployment soar, but many businesses that opened their doors or expanded during the construction boom will go under.

“Many people hoped to get rich, and that didn’t happen,” said Vilmar Soares, the owner of a graphic design company and the founder of Fort Xingú, a movement founded by local business owners in support of Belo Monte. “Around 20 percent of the companies will go bankrupt, especially the ones that went into debt, like hotels and restaurants that were opened using loans.”

“Around 4,000 outsiders working on Belo Monte are living in Altamira, and that drove up rents and boosted the construction business. But people who built real estate property on the basis of loans will also lose out,” he said. 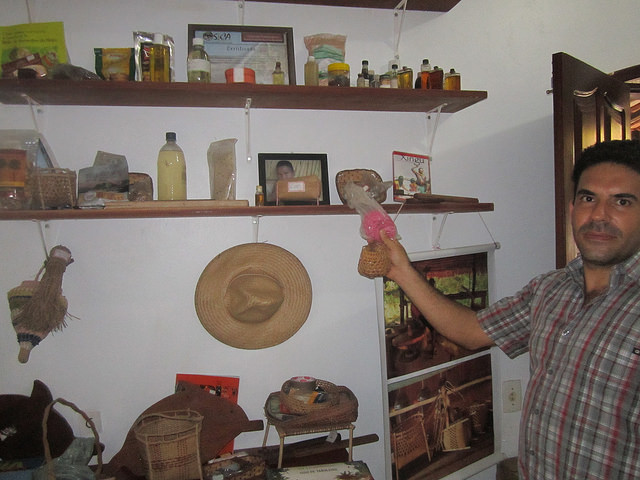 Marcelo Salazar displays forest products in the office of the Altamira Socioenvironmental Institute in the Amazon state of Pará, Brazil. The sustainable use of the wealth offered by forests and of traditional knowledge is, in the expert’s view, the key to ensuring local development. Credit: Mario Osava/IPS

Rents are dropping and will continue to plunge, he predicted. That is because those who will continue to work on the operation and maintenance of the hydroelectric complex will have a neighbourhood in Belo Monte itself, where the main generating plant is located, 55 km from Altamira.

Soares, a businessman in the graphic design industry in this city for 33 years, came here from Goiania, 1,900 km south of Altamira. He said he has avoided orders from Norte Energía, the consortium that holds the licence for operating the hydropower plant for 35 years. Although the consortium’s tenders were good business, he said, they were temporary in nature and generated dependency that had no future.

“The depression here, however, will be less severe than in the case of other hydroelectric dams, because there was a degree of planning, and debates were held to get the company to invest in specific areas like health, education, sanitation and development projects,” he said.

The local Catholic Church, which is opposed to the dam, sees things in a different light. “The future is one of growing unemployment, violent crime levels have gone up and will keep doing so, with 3.5 deaths a week and many people injured by bullets and knives ending up in the hospital, and traffic is total chaos,” Vandeir Alves, the vicar of the Altamira Cathedral parish, told IPS.

“The dreams of a boom turned into a nightmare” for many who hoped that the dam would bring prosperity, according to the Altamira Defence Forum (FDA), which groups 60 associations, organisations like ISA and trade unions. The umbrella group also said the consortium did not provide the announced compensation and violated the rights of indigenous people and other affected communities.

“Once the OL has been granted, the confusion will be over,” he told IPS.

The company expects to obtain the OL in the next few months. But according to the FDA, emission of the licence will be illegal because several conditions that were set for previous permits have not been met, such as providing the city with basic sanitation, and relocating and resettling all of the families and businesses to be displaced by the flooding.

The lack of urban planning, untreated sewage running down several streets, and bridges still under construction over different branches of the river would seem to indicate that the critics are right. 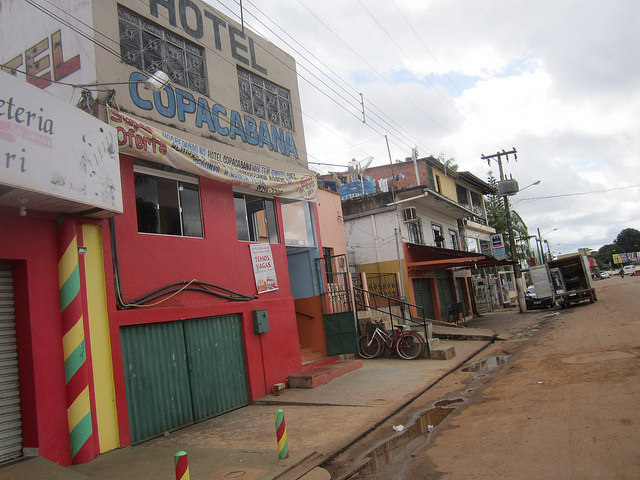 The modest Hotel Copacabana in a suburb of Altamira, the biggest city near the Belo Monte dam in Brazil’s Amazon rainforest. Today, the “vacancies” sign is a permanent fixture, instead of the “no vacancies” sign that hung in the window during the construction boom. Credit: Mario Osava/IPS

But Norte Energía responds that everything will be done soon.

“It takes time; in five years Altamira will be a different city,” transformed by the sanitation works, new or remodeled schools, hospitals and health clinics, a park and new beaches along the river, said Anchieta.

He added that in the future, Altamira will be a regional centre of health services, reinforced by a future medical school that has already been approved. He added that the city will be able to develop ecological tourism, with the river and the surrounding rainforest as attractions.

Progress in a nearby town

Vitoria do Xingu, a neighboring town of 17,000 people, is ahead of the game. The sanitation system was completed, the city was put in order, and the tourism secretariat was created, as well as new tourist routes, including the central attraction: the main Belo Monte plant, a giant feat of engineering, which will generate 11,000 MW of electricity.

Two rural hotels have already been built along the 40-km road between Vitoria and the plant. And a lookout will be built on a hill with a view of the lower stretch of the Xingú River and the dam, municipal engineer José Odinaldo Caldas told IPS.

Waterfalls that won’t be affected by the dam, rapids for canoeing or rafting, caves and forest paths for wildlife watching are other projects to be explored, said municipal planning secretary Joel Yamanaca.

In addition, the local government will provide major incentives to boost development of the dairy industry, poultry farming, aquaculture, horticulture, and the production of cassava flour.

“Unemployment will only affect unskilled workers,” he said.

But Altamira, with a population eight times larger, will always have more hotels, restaurants and shops, he acknowledged.

Renato Filipine, 44, describes himself as “a tremendous entrepreneur” because of how he has expanded these services. After only four years in Altamira he already has two hotels and a 17-table restaurant. And he is about to open two more restaurants – one near Belo Monte, where he believes there is great future potential.

He is not worried about a depression, even though one of his hotels, the modest Copacabana, where workers and their female companions stay on the weekends, is doomed as construction of the Belo Monte dam winds down. “Altamira is still the best place in Brazil; we just have to adapt to the changes,” he said.

For ISA’s Salazar, the priority is ‘extractive production’, as the sustainable management of forests is known in Brazil, because – he argued – the region is competitive in that, but not in agriculture and even less in livestock raising.
And it can be improved “with the right laws, appropriate technologies, proper management of the business chains, and better river transport,” he said.

Some companies, like Natura Cosméticos and the baked goods company Wickbold, already purchase raw materials like cashews from the local forest. Combining the extraction of fruits, nuts and rubber from the rainforest, family farming and increasing industrialisation, Altamira could become one of the poles of economic growth based on the Amazon jungle’s biodiversity, he said.