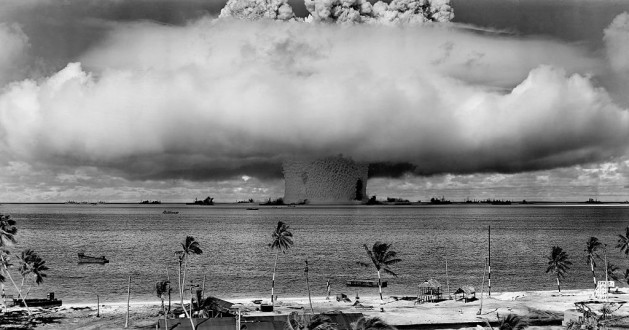 A group of eminent persons (GEM) launched a concerted campaign on Aug. 25, 2015, for entry into force of a global ban on nuclear weapon tests such as this one at Bikini Atoll in 1946. Credit: United States Department of Defense via Wikimedia Commons

HIROSHIMA, Aug 27 2015 (IPS) - As the international community gears up to commemorate the 20th anniversary next year of the opening up of the Comprehensive Nuclear-Test-Ban Treaty (CTBT) for signature, a group of eminent persons (GEM) has launched a concerted campaign for entry into force of a global ban on nuclear weapon testing.

GEM, which was set up by Lassina Zerbo, the Executive Secretary of the September 2013 Preparatory Commission for the Comprehensive Nuclear-Test-Ban Treaty Organization (CTBTO) at the United Nations headquarters in New York, met on Aug. 24-25 in Hiroshima, a modern city on Japan’s Honshu Island, which was largely destroyed by an atomic bomb during the Second World War in 1945.

“Multilateralism in arms control and international security is not only possible, but the most effective way of addressing the complex and multi-layered challenges of the 21st century” – CTBTO Executive Secretary Lassina Zerbo
Hiroshima and Nagasaki are the only two cities in the world which have suffered the devastating and brutal atomic bombs that brought profound suffering to innocent children, women and men, the tales of which continue to be told by the ‘hibakusha’ (survivors of atomic bombings).

“There is nowhere other than this region where the urgency of achieving the Treaty’s entry into force is more evident, and there is no group better equipped with the experience and expertise to help further this cause than the Group of Eminent Persons,” CTBTO Executive Secretary Zerbo told participants.

The GEM is a high-level group comprising eminent personalities and internationally recognised experts whose aim is to promote the global ban on nuclear weapons testing, support and complement efforts to promote the entry into force of the Treaty, as well as reinvigorate international endeavours to achieve this goal.

The two-day meeting was hosted by the government of Japan and the city of Hiroshima, where CTBTO Executive Secretary Zerbo participated in the commemoration of the 70th anniversary of the atomic bombing early August.

On the eve of the meeting, Zerbo joined former United States Secretary of Defence and GEM Member William Perry and Hiroshima Governor Hidehiko Yuzaki as a panellist in a public lecture on nuclear disarmament which was attended by around 100 persons, including many students.

In an opening statement, Zerbo urged global leaders to use the momentum created by the recently reached agreement between the E3+3 (China, France, Germany, the Russian Federation, United Kingdom and the United States) and Iran to inject a much needed dose of hope and positivity in the current discussions on nuclear non-proliferation and disarmament.

“What the Iran deal teaches us is that multilateralism in arms control and international security is not only possible, but the most effective way of addressing the complex and multi-layered challenges of the 21st century. [It] also teaches us that the measure of worth in any security agreement or arms control treaty is in the credibility of its verification provisions. As with the Iran deal, the utility of the CTBT must be judged on the effectiveness of its verification and enforcement mechanisms. In this area, there can be no question,” Zerbo said.

Also speaking at the opening session, Perry expressed his firm belief that ratification of the CTBT served U.S. national interests, not only at the international level but also at the strictly domestic level for national security measures. He considered that the current geopolitical climate constituted a risk for the prospects of entry into force and reiterated the importance of maintaining the moratoria on nuclear testing.

The GEM took stock of the Plan of Action agreed in its meetings in New York (Sep. 2013), Stockholm (Apr. 2014) and Seoul (Jun. 2015). The Group considered the current international climate and determined that, with the upcoming 20th anniversary of the opening for signature of the Comprehensive Nuclear-Test-Ban Treaty, there was an urgency to unite the international community in support of preventing the proliferation and further development of nuclear weapons with the aim of their total elimination.

Participants in the meeting discussed a wide range of relevant issues and debated practical measures that could be undertaken to further advance the entry into force of the Treaty, especially in the run-up to the Article XIV Conference on Facilitating Entry into Force of the CTBT, which will take place at the end of September in New York, with Japan and Kazakhstan as co-chairs.

One hundred and eighty-three countries have signed the Treaty, of which 163 have also ratified it, including three of the nuclear weapon states: France, Russia and the United Kingdom. But 44 specific nuclear technology holder countries must sign and ratify before the CTBT can enter into force. Of these, eight are still missing: China, Egypt, India, Iran, Israel, North Korea, Pakistan and the United States. India, North Korea and Pakistan have yet to sign the CTBT.

The GEM adopted the Hiroshima Declaration, which reaffirmed the group’s commitment to achieving the global elimination of nuclear weapons and, in particular, to the entry into force of the CTBT as “one of the most essential practical measures for nuclear disarmament and non-proliferation”, and, among others, called for “a multilateral approach to engage the leadership of the remaining . . . eight States with the aim of facilitating their respective ratification processes.”

The GEM called on “political leaders, governments, civil society and the international scientific community to raise awareness of the essential role of the CTBT in nuclear disarmament and non-proliferation and in the prevention of the catastrophic consequences of the use of nuclear weapons for humankind.”