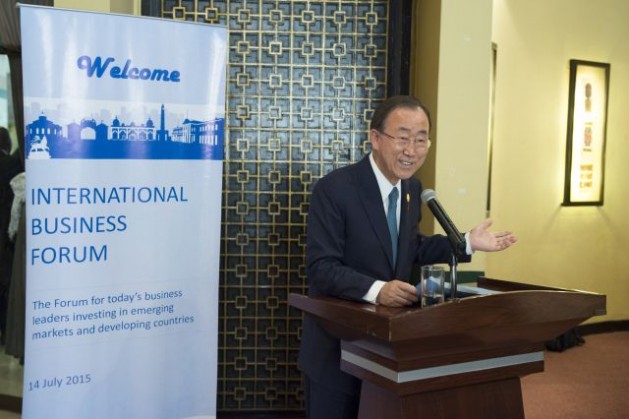 UNITED NATIONS, Aug 5 2015 (IPS) - When the United Nations seeks outside financial assistance either for development needs or to advocate social causes, it invariably turns to the private sector these days.

Perhaps the most demanding is Secretary-General Ban Ki-moon’s appeal to private investors to help the United Nations reach its 100-billion-dollar target per year to battle the devastating consequences of climate change.

“We believe that youth can make a difference, especially in the achievement of the post 2015 agenda: but giving voice to them is not enough. It is important to give new generations the tools to make a change.” -- Mariarosa Cutillo of Benetton

But critics have urged the United Nations to double-check the credentials of some of these companies — on issues such as human rights, fair wages, child labour and environmental record — before deciding to collaborate.

Still, on a more modest scale, the U.N. Development Programme (UNDP) received over 135 million dollars in funds from the business sector between 2009 and 2013 for some of its projects relating to water, energy, healthcare, agriculture and finance and information technology.

In Liberia, a Japanese company, Panasonic, has distributed its first batch of 240 solar lanterns to health workers in Monrovia, allowing them to work at night.

The UNDP also has a partnership with Svani Group Limited, a Ghanaian vehicle dealership, which has provided over eight armoured vehicles deployed to the UN Mission on Ebola Emergency Response (UNMEER) in Guinea, Liberia, Sierra Leone and Ghana.

And more recently, the U.N. Academic Impact (UNAI), created under the aegis of the Department of Public Information (DPI) has collaborated with United Colours of Benetton’s “UnHate Foundation” for a Diversity Contest to “showcase the engagement of young people around the world, and the innovation, energy and commitment they bring to personally-crafted solutions that address some of the world’s most pressing issues”, including racial intolerance and xenophobia.

A panel of judges picked 10 winners who received 20,000 Euros each donated by United Colors of Benetton, a global fashion brand based in Italy.

Benetton has also teamed with U.N. Women in its intense campaign to eliminate gender violence worldwide.

Nanette Braun Chief, Communications and Advocacy at U.N. Women, told IPS Benetton’s UnHate Foundation has been supporting U.N. Women in its advocacy on ending violence against women for the past two years through advertising and social media campaigns.

“We hope to expand the partnership and collaboration in the future,” she added.

Asked about Benetton’s role in advocating U.N. causes, Mariarosa Cutillo, Corporate Social Responsibility Manager at Benetton Group in Milan, told IPS the main reason is “because, first of all, this is an integral part of the DNA of our company, which has always been in the frontline – often in provocative and very progressive ways – on social issues, including the fight against any form of intolerance and discrimination.”

She pointed out this approach has been consolidated through social projects and communication campaigns, and has been translated also through the establishment of the UnHate Foundation.

Since 2011, the Foundation representing one of the arms of the company has developed social programmes to fight against hate in all its forms, while supporting youth leadership.

“We believe that youth can make a difference, especially in the achievement of the post 2015 agenda: but giving voice to them is not enough. It is important to give new generations the tools to make a change.”

With the UnHate news initiative, in partnership with UNAI/DPI, “we activated youth and gave them a possibility to concretely develop projects on human rights and development.”

Cutillo also cited “another outstanding example of successful support and activation of youth promoted by UnHate Foundation, which is the ‘Unemployee of the Year’ initiative through which the Foundation financed 100 projects and start-ups submitted and implemented by youth coming from all over the world in 2012.”

Unemployee of the Year celebrated young people’s ingenuity, creativity, and their ability to create new smart ways of addressing the problem of unemployment.

In general, she said, “putting people at the centre of our activities is one of the key points of Benetton Group sustainability strategy, of which UnHate Foundation is one of the assets.”

She described it as an example of private/public partnership that can work in an innovative way, by activating new generations and giving them the means to become leaders of change.

Asked if Benetton is planning to get involved in any other U.N. sponsored events in the future,

She also said Benetton has a record of 20 years of cooperation, in different ways, with the United Nations.

More than ever before, “Benetton finds the United Nations as a most crucial partner within the stakeholders’ engagement of our present sustainability strategy.”

She said she sees partnerships with U.N. agencies as “a mutual growth process in our respective roles, where we can bring an active contribution to the achievement of the U.N.’s Sustainable Development Goals (SDGS) by putting in place partnerships that can bring an innovative approach and a real, concrete impact.”