Men Start to Make Women’s Struggles Their Own in Argentina 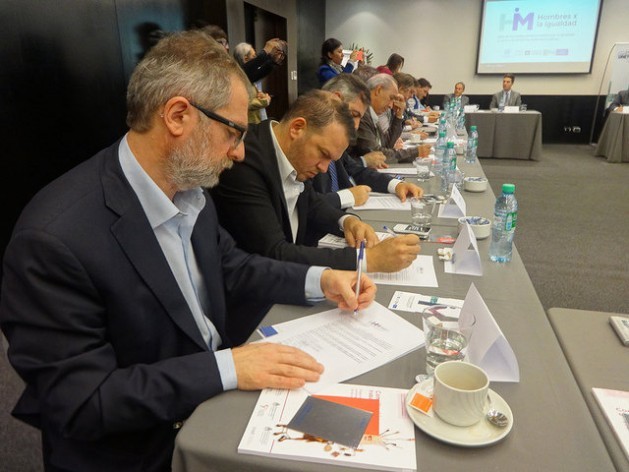 A group of men signing the “commitment to equality” during a meeting in Buenos Aires organised by the Men for Equality network, created a year ago in Argentina. Credit: Fabiana Frayssinet/IPS

BUENOS AIRES, Sep 30 2015 (IPS) - The meeting was about gender equality, but for once there were more men than women. It marked a watershed in the struggle in Argentina to make the commitment to equality more than just “a women’s thing.”

The Buenos Aires meeting was organised by the Men for Equality (HxI) network, which emerged a year ago to “generate a space to incorporate all men who promote gender equality and the prevention of violence against women, and achieve the commitment to carry out actions to that end in their areas of influence and/or workplaces.”

Behind the initiative are the United Nations in Argentina and the government’s National Women’s Council, along with two private organisations: the Avon Foundation and the local branch of the French multinational retailer Carrefour.

The president of the National Women’s Council, Mariana Gras, was surprised that women were in the minority at the meeting.

“There are no ‘pure’ men, there are no men who haven’t discriminated at some point; it’s something that we men have become aware of little by little, on the public and personal levels, as fathers, as sons, as husbands – of the need to do something ourselves.” -- René Mauricio Valdés

“The meetings are always made up of women,” she said in an interview with IPS. “When we talk to different authorities or leaders and say we’re planning a meeting on gender equality, they say: ‘I’ll send the girls’. Men feel uncomfortable, they make jokes, and prefer not to go to these meetings.”

The U.N. resident coordinator in Argentina, René Mauricio Valdés, told IPS: “This has been gaining momentum among a group of us men who often ran into each other at events of this kind, where we shared specific concerns. Almost all the events that we organised on women’s rights were attended virtually by women only.”

Representatives of the government, the judicial system, the business community, academia and social movements took part in the Sep. 22 meeting.

Several participants signed the “commitment to equality” – one of the HxI network’s initiatives.[

The document, whose signatories include Labour Minister Carlos Tomada, states: “I commit to making a daily personal evaluation of my behavior and attitudes, to avoid reproducing the prejudices and stereotypes that sustain systematic discrimination towards women and keep them from enjoying their rights in equal conditions with men.”

“’Machismo’ is something we all experience in this society, because it forms part of our cultural norms, and marks us all. And it also works the other way: if a man goes to the police station to report that a woman beat him, they tell him ‘don’t be a fag, go and take care of it yourself’,” she told the audience at the meeting.

Valdés said, “There are no ‘pure’ men, there are no men who haven’t discriminated at some point; it’s something that we men have become aware of little by little, on the public and personal levels, as fathers, as sons, as husbands – of the need to do something ourselves.”

The challenge is for this commitment to come from a group of influential leaders and intellectuals, and to be reflected in all provinces, in urban and rural areas, in every neighbourhood.

“We aren’t inviting ‘pure’ men to join in; we want everyone to join and to assume a personal commitment so that in the very first place in our own lives we won’t tolerate or permit these things in the places where we live, study, go to church, have fun,” Valdés explained.

This is the aim of organisations like the White Ribbon Campaign in Argentina, which has been organising mixed workshops for young men and women in football clubs in the central province of Córdoba.

Hugo Huberman, the national coordinator of the Campaign, told IPS, “We are working with football club youth teams about how the process of male socialisation and sports, especially football, generates masculine stereotypes normally linked to violence, not respecting others, and other things.”

The White Ribbon Campaign is a global movement of men working to end male violence against women. It emerged in Canada in 1991.

But machismo also manifests itself in simple day-to-day things like visiting the doctor.

“We’re working on men’s health, to carry out small campaigns to get men to go to the doctor more often,” said the activist. “We don’t go to the doctor because of an identity thing: guys who visit the doctor are weak and vulnerable; we don’t follow treatment plans, we don’t watch our diet.”

Carrefour, the French corporation, is also making an effort in its chain of supermarkets in Argentina. For example, it allows men as well as women to take time off for their child’s birthday or to attend important meetings at school.

The company also tries to schedule work meetings in the mornings, or by 4:00 PM at the latest, so employees won’t get home late.

The company’s director of corporate affairs, Leonardo Scarone, told IPS, “It’s true that society today still sees men as breadwinners and that women assume – in quotes – the role of taking care of the family, running the home, etc. If you don’t give men the opportunity to do these things, at the same time you’re taking away the possibility for women to work and develop their career.”

To promote women’s professional development, the company also established the rule that there must be at least one woman on each list of candidates for managerial positions, and the company’s career committees have been instructed to make an effort to promote women.

“At a managerial level we have 20 percent women; the hard thing was breaking through that famous glass ceiling, so women could reach the position of senior managers,” Scarone said.

Today, three years after its diversity programme began to be implemented, the company has six women senior managers – around 15 percent of the total, up from zero.

Gras said, “To combat gender violence, everyone is needed, because if one part of society is affected and we think the solution only lies in those who suffer the problem, first of all what we have is a society absolutely lacking in solidarity, and second, we´re not understanding the effects that ‘the other’ has in our society. We are all actors.”