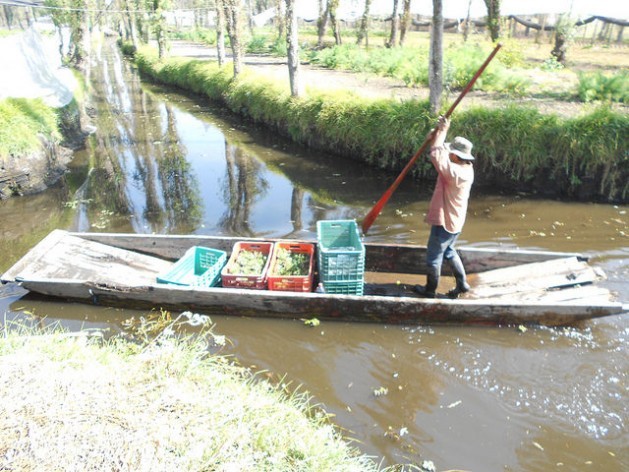 A farmer transports his freshly harvested crops from his chinampa - a rectangular garden on land reclaimed from the wetlands of Mexico City - along a canal in Xochimilco. But this age-old Aztec technique used to feed the local population is threatened by the encroaching city and by pollution. Credit: Emilio Godoy/IPS

XOCHIMILCO, Mexico , Feb 27 2016 (IPS) - David Jiménez grows two kinds of lettuce and other fresh produce on his “chinampa” or artificial island just under one hectare in size in San Gregorio Atlapulco, on the south side of Mexico City.

“We can get five or six harvests a year. Lettuce can grow in 30 days,” Jiménez, the president of the six-member La Casa de la Chinampa cooperative, told IPS with evident enthusiasm. The cooperative operates in Xochimilco, one of Mexico City’s 16 boroughs.

The ejido – land held in common by the inhabitants of a village and farmed cooperatively or individually – where Jiménez has his farm covers 800 hectares, and is home to 800 farmers who mainly grow vegetables. Half of the ejido is made up of chinampas.

The system of chinampas dates back to the Aztecs, long before the arrival of the Spanish conquistadors in the 15th century. The technique creates small, rectangular gardens reclaimed from Mexico City’s marshy lakebed by piling up soil on a mat of sticks, using wattle as fencing and willow trees at the corners to secure the bed.

The chinampas are rich in muck and decaying vegetation, which provide nutrients for the crops, while the ditches between them give the plants continuous access to water. As a result, the vegetables grown there are especially rich in nutrients.

The chinampas, which help feed the 21 million people who live in Greater Mexico City, are in the boroughs of Milpa Alta, Tláhuac and Xochimilco.

Worked by some 5,000 farmers, the chinampas cover a total of 750 hectares. The system is profitable, because they produce a combined total of around 80 tons a day of vegetables.

Each head of lettuce fetches 10 cents of a dollar, Jiménez said, as he tended to a row of lettuce.

The chinampas or “floating gardens” produce spinach, chard, radishes, parsley, coriander, cauliflower, celery, mint, chives, rosemary, lettuce and purslane or pigweed. Visitors to the area walk along paths that take them across a green carpet segmented into rectangles of crops and divided by the ditches of water they depend on to grow.

Studies also show that the chinampas repel pests, are more productive than conventional agricultural systems, and produce biomass. The technique is completely sustainable, retaining moisture and regulating the microclimate in the area. 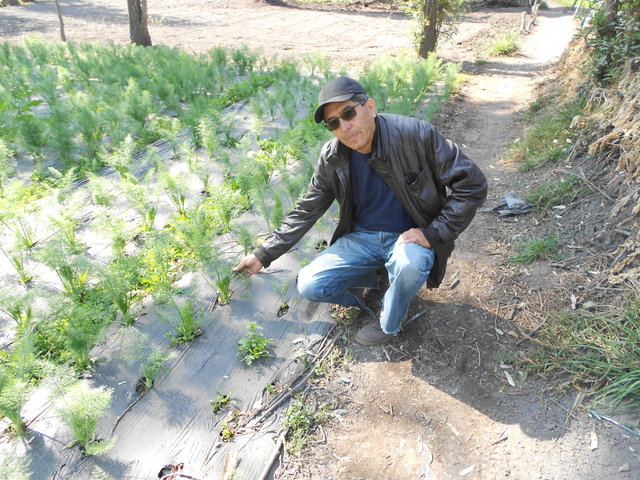 David Jiménez, a local farmer, next to medicinal herbs grown on his land in San Gregorio de Atlapulco in the Mexico City borough of Xochimilco, where chinampas continue to survive – an age-old Aztec technique that creates farmland out of the local wetlands. Credit: Emilio Godoy/IPS

Ricardo Rodríguez, founder and director of the company De la Chinampa a tu Mesa (“from the chinampa to your table”), came up with a way to link traditional production techniques with new technologies, by marketing the vegetables grown on the chinampas over social networks.

He picks up fresh produce in the Cuemanco natural area in Xochimilco, signs up customers on his web page, processes the purchases, and distributes the orders to the customers’ homes.

“We help generate demand, which motivates them to keep farming. And this helps restore the chinampas. The market is starting to recognise the value of the chinampas,” Rodríguez told IPS.

The entrepreneur works with 22 “chinamperos” or chinampa farmers who grow broccoli, spinach, beets, radishes and other crops on approximately 15 hectares. He delivers some eight orders a day, weighing eight kg on average. His 450 registered customers include stores and restaurants that sell organic food.

Xochimilco, which is home to more than 415,000 people on some 125 sq km, was named a World Heritage Site by the United Nations Educational, Scientific and Cultural Organisation (UNESCO) in 1987.

In addition, the Ejidos de Xochimilco and San Gregorio Atlapulco Lake System have been on the Ramsar Convention List of Wetlands of International Importance since 2004.

Marco Covarrubias, the head of the Gastronomy Centre at the private Claustro de Sor Juana University based in Mexico City, stresses the importance of the chinampas in terms of food production.

“The advantage is that they are in permanent contact with water, which unlike in other systems is not used to irrigate but is absorbed by the plants,” he told IPS. “And they have added nutritional value because a large part of the chinampas is free of pesticides and other agrochemicals.”

Urban sprawl and expanding slums, the use of pesticides, climate change, excessive use of groundwater, and neglect have all contributed to the destruction of the chinampas, says a study by the Natural and Cultural Heritage of Humanity Zone Authority (AZP) in Xochimilco, Tláhuac and Milpa Alta.

The AZP, created in 2014, is in charge of managing the preservation of this special ecosystem, in order to maintain the UNESCO and Ramsar Convention designations.

“Any effort to protect the area must take into account the local farmers and the cultural environment surrounding the chinampas. This is a culture that is not really appreciated, the restoration plans haven’t been carried out,” said Jiménez.

His cooperative decided to create a model farm on two hectares of their land, to show visitors the benefits of the chinampas.

And on Feb. 22, it launched a programme in local schools, which includes a virtual tour of the chinampas. With some 6,400 dollars in public funds, the idea is to raise awareness among 6,000 students in primary and secondary schools in Xochimilco.

The environmental authority is facing cuts, which have hurt its efforts to protect the region. Its budget shrank from 700,000 dollars in 2015 to 400,000 dollars this year. Since 2013, the AZP has supported 174 environmental and cultural improvement projects, but there is no clear information about the specific impact on the chinampas.

In March 2014, the French Global Environment Facility donated 1.65 million dollars for the conservation of the area.

In an October 2014 report, “Rehabilitation of the chinampera network and the Xochimilco native species habitat,” the Biology Institute of the National Autonomous University of Mexico said restoration of the chinampas should be a priority, because of their ecological, economic and social importance.

It recommended promoting the concept of chinampa-nature reserve, “because this represents multiple benefits for improving water conditions while giving a boost to sustainable productive activities as a strategy to prevent encroachment by urban sprawl.”

Covarrubias, meanwhile, said “Greater attention should be paid to the chinampera zone; it should be studied as an area of extremely high production potential, and a public policy should be created to link people who live in, and make a living from, the chinampas, with direct buyers.”

Since 2014, his university has organised the La Chinampería programme, to hook up local farmers and buyers. And this year it is carrying out another applied research plan to foment value chains, with the participation of 15 chinampa farmers.

“Awareness-raising programmes are needed for their descendants to start to recuperate the chinampas, improve the cleaning system, and acknowledge the farmers,” said Rodríguez, the entrepreneur, who organises “consciousness-raising tours” on the role of the chinampas in food security and the importance of small-scale local agriculture.

He wants to create a market of producers in Cuemanco, generate a label for goods produced in Xochimilco, to boost the prices of local products, and set up a collection centre for the products.