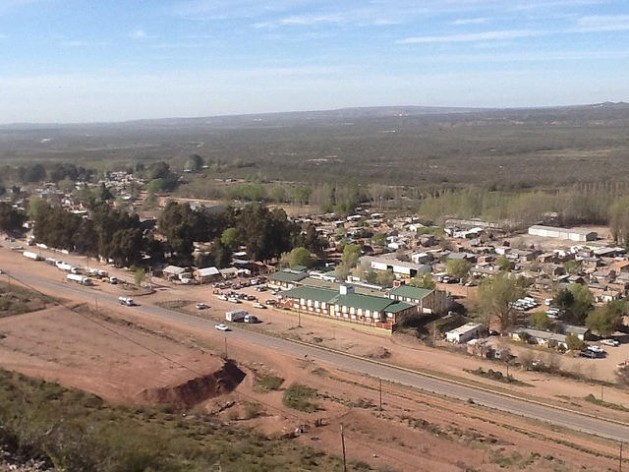 Añelo, a Patagonian town in southwest Argentina that experienced explosive growth because it is next to the country’s biggest shale oil and gas field, is now starting to feel the impact on the development of these resources due to the plunge in international oil prices. Credit: Fabiana Frayssinet/IPS

AÑELO, Argentina, Mar 19 2016 (IPS) - The dizzying growth of Añelo, a town in southwest Argentina, driven by the production of shale oil and gas in the Vaca Muerta geological reserve, has slowed down due to the plunge in global oil prices, which has put a curb on local development and is threatening investment and employment.

Vaca Muerta, a 30,000-sq-km geological reserve rich in unconventional fossil fuels in the province of Neuquén, began to be exploited in mid-2013 by the state-run oil company Yacimientos Petroliferos Fiscales (YPF) in a joint venture with U.S. oil giant Chevron.

“We had an interesting growth boom thanks to the strategic development plan that we were promoting, to get all of the oil services companies to set up shop in Añelo. That really boosted our growth, and helped our town to develop,” Añelo Mayor Darío Díaz told IPS.

The population of this town located 100 km from the provincial capital, Neuquén, in Argentina’s southern Patagonian region, rose twofold from 3,000 to 6,000.

And that is not counting the large number of machinists, technicians, engineers and executives of the oil companies who rotate in and out of the area, along with the truckers who haul supplies to the Loma Campana oilfield eight km from Añelo.

“There were around 10 services companies operating in Añelo; now we have about 50, and some 160 agreements signed for other companies to come here,” the mayor said.

The shale gas and oil in Vaca Muerta has made this country the second in the world after the United States in production of unconventional fossil fuels.

Loma Campana, where there are 300 active wells producing unconventional gas and oil after a total investment of three billion dollars, currently produces 50 billion barrels per day of oil, according to YPF figures.

The shale oil and gas industry has fuelled heavy public investment in Añelo and nearby towns. The population of this town is expected to reach 25,000 in the next 15 years.

“We’re building two schools and a hospital,” Díaz told IPS. “The primary and secondary schools have been expanded. We are making town squares and a new energy substation. We built a water treatment plant and have improved the sewage service. In terms of public works we have really done a great deal, keeping our eyes on our goal: growth.”

But the expansion of the town has also brought problems.

The mayor pointed out, for example, that rent for a two-bedroom housing unit has climbed from 33 dollars to 100 dollars a month, and that a plot of land that previously was worth 1,700 dollars cannot be purchased now for less than 130,000 dollars.

“Those are abrupt changes brought by the oil industry,” Díaz said. “What us old-time residents of Añelo have suffered the most is the social impact of all of this movement, of so much vehicle traffic, so many people, which brings insecurity and other things that are typical of development in general.”

People in Añelo are now worried that despite the costs they are paying for the development boom, the promised progress will not arrive.

On Mar. 4, the outgoing president of YPF, Miguel Galuccio, announced in a conference with international investors that the cutbacks in the industry in 2016 would be reflected in slower progress in Vaca Muerta. 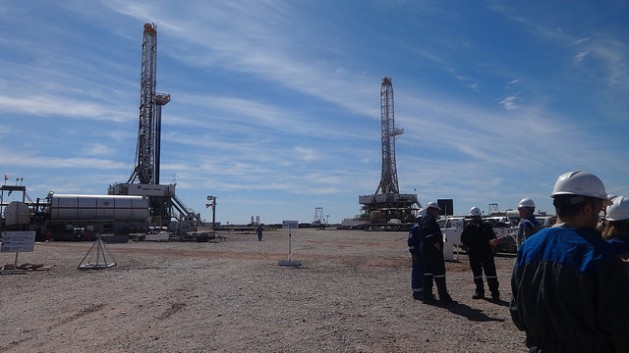 Workers in Loma Campana, a field with 300 shale oil wells in Vaca Muerta. The decision to slow down the development of unconventional fossil fuels in Argentina has led to lay-offs in the area. Credit: Fabiana Frayssinet/IPS

In 2015, the company’s revenues shrank 49 percent, while investment grew less than four percent, below previous levels.

The costs of producing shale gas and oil, which requires an expensive technique known as hydraulic fracturing or “fracking”, are not competitive in a context where international oil prices are hovering between 30 and 40 dollars a barrel.

But the internal price of a barrel in Vaca Muerta is regulated at 67.5 dollars and in the rest of the country’s oilfields at 54.9 percent – an artificial price established to shore up the oil industry’s expansion plans, especially in this part of the country, although at a slower pace now.

YPF announced that in Vaca Muerta, it would cut oil production costs by 15 percent, which has led to lay-offs.

“The situation is very complicated,” said Díaz, who estimated that there will be 1,000 more unemployed people in the province, added to those who have already lost their jobs. “A reduction in activity,” has already been seen, he said, and “people are working fewer hours” and wages have fallen, which has a social impact, he added.

Oil worker unions in Vaca Muerta say 1,000 people have been laid off so far in the industry, as well as 1,000 in other areas.

Eduardo Toledo, an agricultural technician who decided to move from Buenos Aires to Añelo and invest his savings in a restaurant, is worried about the slowdown in oil industry activity in Vaca Muerta.

“When we started, we had just one stove with three burners and an oven,” said Toledo, whose customers are truck drivers, factory workers and other oil industry employees who have been drawn to this area by the relatively high wages paid by the industry.

Like Toledo, many people invested in hotels, rental housing, shops and small-scale service businesses. “Everyone wanted to come to what was going to be the shale gas and oil capital,” he said.

But now his restaurant is working at a “mid to low level of activity.”

“If people know they’re going to lose their jobs, they don’t want to spend money,” he said.

Toledo is still confident that interest in shale gas and oil will keep things moving, despite the plummeting prices.

In Vaca Muerta, 77 percent of the proven shale reserves are gas.

Besides, “there are major gas resources that have not yet become reserves,” Ignacio Sabbatella, who holds a PhD in social sciences from the University of Buenos Aires and is the co-author of the book “History of a privatization; How and why the YPF was lost”, told IPS. (YPF was renationalised in 2012.)

But experts and local residents are taking a long-term view.

Sabbatella stressed that it is important to keep in mind that beyond the current international oil price swings, the investments in Vaca Muerta “will yield fruit in the long term” – in five to 10 years.

He pointed out that shale oil and gas production only got underway in the area in 2011, “and especially after the recovery of state control of YPF, in a joint venture with transnational corporations like Chevron.”

YPF, Argentina’s biggest company, was in private hands from 1992 to 2012, when the government of Cristina Fernández (2007-2015) decided to renationalise it.

Sabbatella said the announced cutbacks in YPF have coincided with an overall “shift in policy” since the arrival to the presidency on Dec. 10 of the centre-right Mauricio Macri, who ended a period of centre-left governments under Néstor Kirchner (2003-2007) and later his wife and successor, Fernández.

“The previous government did everything possible to sustain the levels of investment, exploration and production, even in an unfavourable international context, and what we are seeing is that this government is only halfway maintaining that policy and is even pushing YPF to cut its investments,” said Sabbatella.

“The current administration believes that the best thing is to adjust domestic oil industry policy to external conditions. In a context of low prices, they believe the best idea is to not sustain domestic investment, and they have even shown some illustrations of this, by importing cheaper crude and fuel from abroad, for example,” he said.

But Toledo prefers to be optimistic, because otherwise, he said, “I have to close my restaurant.”

“I can’t afford to go somewhere else and I’m not interested anyway because it’s hard to set down roots again in a place like this.”