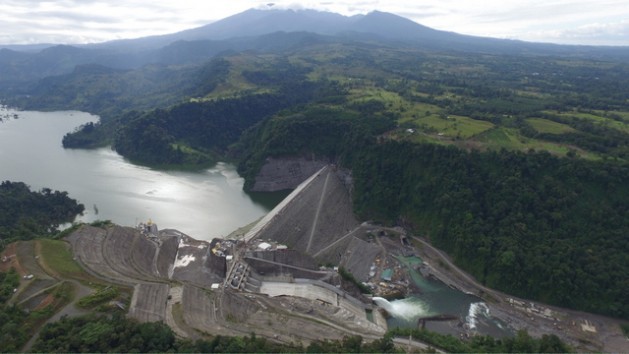 The Reventazón Hydroelectric Project, Costa Rica’s fifth hydropower dam, will begin to operate in the first half of this year. Credit: Instituto Costarricense de Electricidad

SAN JOSE, Mar 1 2016 (IPS) - Over the last decade, Central America has managed to reduce its dependence on fossil fuels for the production of electric power, while expanding coverage. But the progress made by each country varies widely.

“The question is not whether or not demand is met, but which sources we are using to generate electricity,” Diego Fernández, one of the researchers with the State of the Region Programme (PER) of the Consejo Nacional de Rectores (CONARE), which groups Costa Rica’s four public universities, told IPS.

Fernández pointed out that more and more Central Americans are connected to their national power grids. The electrification rate climbed from an average of 69 percent in 2000 to 90 percent in 2013, according to a joint study by PER and the Economic Commission for Latin America and the Caribbean (ECLAC).

“The biggest advances in the region (in terms of energy) have been seen in the electricity sector,” says the October 2015 report.

However, the growth has not been uniform. In electrification, Nicaragua has only 75 percent coverage, much lower than the regional average, while coverage in Costa Rica has reached 99 percent.

The sources chosen to generate electricity are the clearest demonstration of the priorities in each country’s energy strategy.

Costa Rica is the leader in clean energy sources, which now account for 95 percent of the country’s electricity.

Meanwhile, Honduras and Nicaragua have the dirtiest power grids, with nearly half of their electricity coming from plants that run mainly on low-cost bunker fuel, which is the heavy, residual oil that is left over after gasoline, diesel and other light hydrocarbons are extracted from crude oil during the refining process. This low-quality fossil fuel has an impact on the health of local inhabitants.

The clearest evidence that decisions about electric power have a direct impact on local economies is what countries spend on oil – nations that use fossil fuels to generate electricity spend twice as much as those that rely more heavily on renewable sources.

“In countries that produce more electric power from renewable sources, like Costa Rica, the oil bill is less than five percent of GDP; in Honduras and Nicaragua, the oil bill is 12 percent,” the researcher said.

Central America, with a total population of 48 million, is a net importer of fossil fuels, which are used mainly for transportation, and to a lesser extent in power generation.

As a result, Central America’s oil bill climbed from 3.5 percent of GDP in 2000 to 8.5 percent in 2014, according to statistics provided by PER and ECLAC.

But overall, expansion in electricity generation in the region between 2003 and 2014 largely involved renewables. 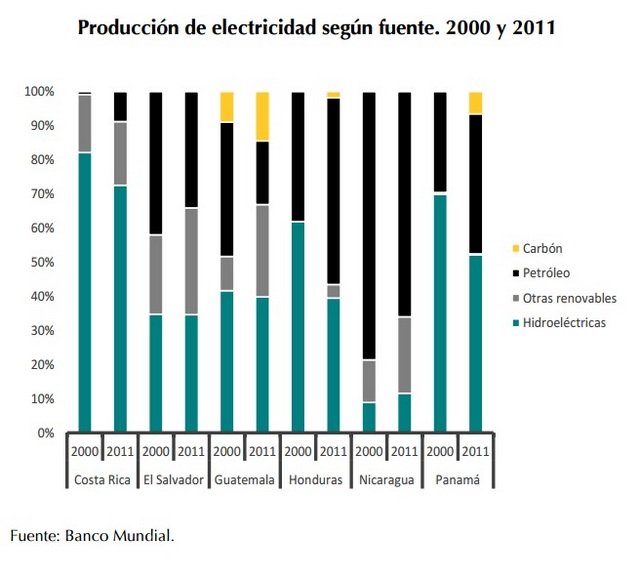 There are major disparities in Central America, where Costa Rica’s electricity, for example, comes almost entirely from renewable sources, while half of Nicaragua’s power comes from fossil fuels. And coal has been making a comeback. Credit: State of the Region

“Thanks to regional accords and national policies, the share of renewable energies increased….from 57 to 64 percent,” Víctor Hugo Ventura, the head of ECLAC’s Energy and Natural Resources Unit, told IPS.

The Guatemalan expert said the region still puts a priority on hydroelectricity, but medium and large-scale projects are blocked and delayed by opposition from social and environmental activists.

However, it is difficult to generalise about the region in terms of electricity production, because of the differences between the countries.

Guatemala, for example, increased the share of renewable energy from 50.7 to 56.1 percent of its energy mix between 2009 and 2014, according to ECLAC, but it continues to invest in coal-fired power stations, the most highly polluting form of energy.

A coal plant belonging to Jaguar Energy Guatemala, a subsidiary of the U.S.-based Ashmore Energy International, began to operate in Guatemala in 2014. Built at an estimated cost of 750 million dollars, it has an installed capacity of 300 MW, and is now the country’s biggest power plant.

However, Ventura said the plant does not necessarily mean the country intends to increase its dependence on coal. He argued that it was the result of a misguided decision taken when the price of oil skyrocketed in 2007. “Problems with the generators forced it to stop operating, and it is currently not producing electricity. Sometimes what’s cheap turns out to be expensive,” he said.

The ECLAC expert predicted a rise in consumption of natural gas, another fossil fuel, over the next decade in Central America.

But for years, this region, made up of Belize, Costa Rica, El Salvador, Guatemala, Honduras, Nicaragua and Panama, has been urged to reduce its dependence on fossil fuels to generate electricity.

Overall, the region has responded, although it has not stopped installing power stations that run on coal and bunker fuel, drawing criticism in reports by international bodies.

“The outlook has been very positive for wind power, whose capacity has grown by a factor of nearly 10 so far this millennium,” states the joint PER/ECLAC report.

In Nicaragua, wind energy represented 14.8 percent of the country’s energy production in 2013.

“We can mention several cases of solar panel projects, where the installation and maintenance has been put in the hands of local women sent for training to India,” said Ventura from the subregional ECLAC office in Mexico.

He said the countries of Central America must take climate change and the need to cut greenhouse gas emissions into account in their long-term plans.

“Climate change represents major challenges for the region, where the effects and impacts of this phenomenon also have to be taken into consideration in terms of renewable resources and capacity to generate less polluting forms of energy,” Alejandra Sobenes, a lawyer who is an expert on sustainability, told IPS.

Sobenes, a former Guatemalan deputy minister of natural resources, said her country has recognised the need to take measures to prevent electricity shortages after 2026.

“But the commitment to reduce our emissions by at least 11.2 percent, or 22.6 percent in a more ambitious scenario, must be kept in mind, and the use of coal should be reconsidered,” she said from the Guatemalan capital.

Another problem is the variability of the most accessible clean energy sources: wind and the sun.

“In the case of solar and wind energy, the insertion of renewable sources in the region’s energy mix has been facilitated a great deal, but with one problem: these sources are variable,” Javier Orozco, director of electrical planning in the Costa Rican power utility, Instituto Costarricense de Electricidad, told IPS.

Each country gets around this variability as best it can. One strategy is to turn to geothermal energy, which is abundant and relatively untapped in the region. Another alternative is to build enormous reservoirs to release water when sun or wind are in short supply. And then there is the option of burning fossil fuels.

“In Costa Rica we use the most adequate technological solution: hydropower dams. We store up energy, or water, and release it as needed,” said Orozco.