This article is published ahead of the World Day to Combat Desertification, celebrated Jun. 17. 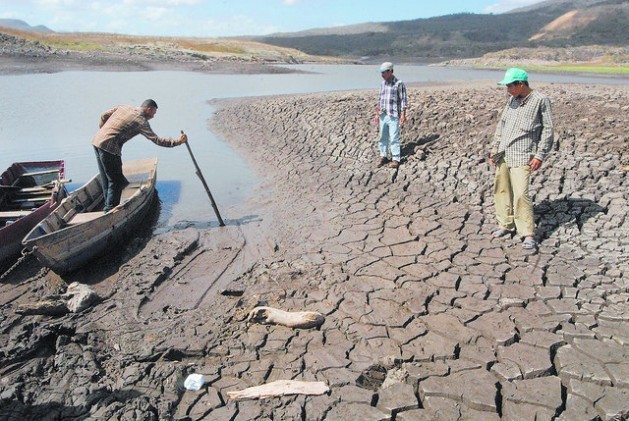 Las Canoas Lake in the town of Tipitapa, near Managua, dries up every time the El Niño weather phenomenon affects Nicaragua, leaving local residents without fish and without water for their crops. Credit: Guillermo Flores/IPS

SANTIAGO, Jun 15 2016 (IPS) - Curbing soil degradation is essential for ecological sustainability and food security in Latin America and the Caribbean.

“Everyone knows how important water is, but not everyone understands that soil is not just what we walk on, it’s what provides us with food, fiber and building materials, and it is where water is retained and atmospheric carbon is stored,” said Pilar Román at the regional office of the United Nation Food and Agriculture Organisation (FAO).

More than 68 percent of the soil in South America is currently affected by erosion: 100 million hectares of land have been degraded as a result of deforestation and 70 million have been over-grazed.

For example, desertification plagues 55 percent of Brazil’s Northeast region – whose nearly 1.6 million sq km represent 18 percent of the national territory – affecting a large part of the staple food crops, such as maize and beans.

An especially serious case is Bolivia, where six million people, or 77 percent of the population, live in degraded areas.

The situation is not much different in Central America. According to the 2014 Soil Atlas of Latin America and the Caribbean produced by the EUROCLIMA program, erosion affects 75 percent of the land in El Salvador, while in Guatemala 12 percent is threatened by desertification.

FAO stresses that as much as 95 percent of the food consumed worldwide comes from the soil, and 33 percent of global soils are degraded.

In Africa, 80 percent of land is moderately to severely eroded, and another 10 percent suffers from slight erosion.

To alert the global population about the dangers posed by desertification and soil degradation, the world celebrates the World Day to Combat Desertification on Jun. 17, under the theme this year of “Protect Earth. Restore Land. Engage People”.

“Without a long-term solution, desertification and land degradation will not only affect food supply but lead to increased migration and threaten the stability of many nations and regions,” U.N. Secretary General Ban Ki-moon said on the occasion of the international day this year.

Román, with the FAO regional office’s technical support for South American subregional coordination, told IPS that there are close links between poverty, desertification and land degradation.

“Numerous studies show that the poorest and most vulnerable communities have the worst access to inputs. A poor community has access to less fertile land, and more limited access to seeds, water, productive resources, agricultural machinery and incentives,” she said. 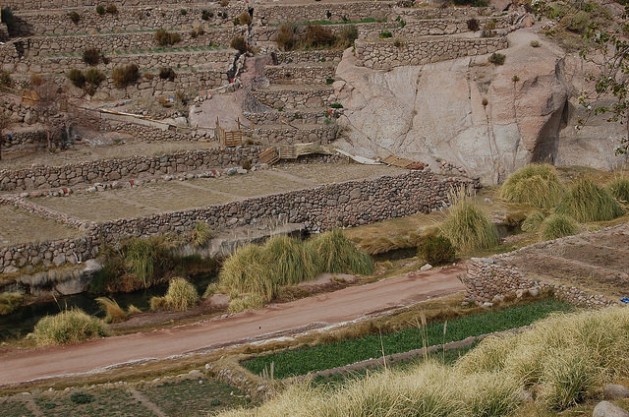 Terraces built by Atacameño indigenous people in the village of Caspana, in the northern Chilean region of Antofagasta. This age-old farming technique represents local adaptation to the climate and arid soil to guarantee the food supply for Andean highlands people. Credit: Marianela Jarroud/IPS

“In these poor communities, the most vulnerable are women, who have fewer land titles and more restricted access to economic incentives, and indigenous people.

“There is a direct correlation in that direction and vice versa: degraded soil will push a community to migrate and will generate conflicts over a limited resource,” she said in an interview in the FAO regional office in Santiago.

One example is Chile, where 49 percent of the land suffers from moderate to severe erosion and 62 percent faces desertification.

To address this severe problem, the authorities updated a land degradation map, with the aim of designing and implementing strategic climate change mitigation and adaptation measures.

The map was updated using meteorological and bioclimatic data from the last 60 years, as well as physiographical, socioeconomic and environmental indicators, and statistics on natural resources.

Efraín Duarte, an expert with Sud-Austral, a private consultancy, who is the author of the updated map, told IPS that “the main direct causes of desertification, land degradation and drought at a national level are deforestation, degradation of forests, forest fires and processes arising from land-use changes.”

“The impact of climate change” should also be factored in, he said.

According to several studies, at least 25 percent of the rainfall shortage during the current drought in Chile, which has dragged on for nearly five years, is attributable to human-induced climate change, said Duarte.

Using the updated map, the government designed a national strategy focused on supporting the recovery and protection of native forests and plants adapted to desert conditions, and on fomenting reforestation and revegetation.

According to Duarte, “Chile could carry out early mitigation actions focused on fighting deforestation, forest degradation, excessive extraction of forest products, forest fires, over-grazing, over-use of land and unsustainable land use, and lastly, the employment of technologies inappropriate for fragile ecosystems.”

The expert said the fight against desertification is a shared responsibility at the national and international levels.

Román concurred and proposed that the prevention of soil degradation should be carried out “in a holistic manner, based on adequate information and training and awareness-raising among communities and decision-making agents on protection of the soil.”

Also important in this effort are agricultural production, avoiding the use of bad practices that prioritise short-term results, and pressure on land, he added.

For FAO, sustainable agricultural production practices would make it possible to produce 58 percent more food, besides protecting the soil for future generations.

Prevention not only consists of applying techniques in the countryside, but also making efforts at the level of government and legal instruments, and working with the communities, said Román.

While the ideal is to prevent degradation and desertification, there have been successful initiatives in the recovery of desertified areas.

Román underlined that, as a form of mitigation, it is important to diversify and expand the range of foods consumed, as potatoes, rice, wheat and maize – just four of the 30,000 edible plants that have been identified – currently represent 60 percent of all food that is eaten.

“On one hand, monoculture plantations of these plants are one of the factors of soil degradation, and on the other hand, a diet based on carbohydrates from these plants generates malnutrition,” she said.