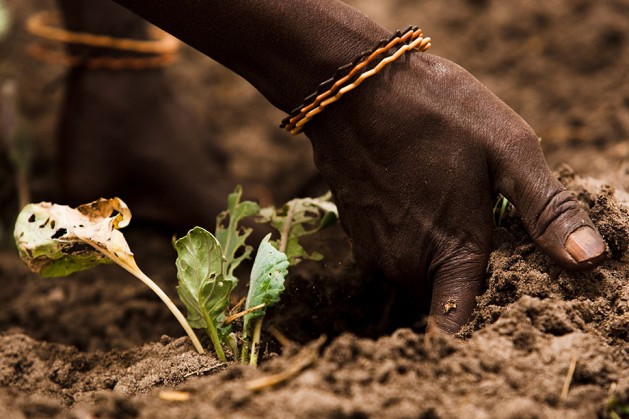 NTUNGAMO DISTRICT, Uganda, Jan 13 2015 (IPS) - A report published last month by the Montpellier Panel – an eminent group of agriculture, ecology and trade experts from Africa and Europe – says about 65 percent of Africa’s arable land is too damaged to sustain viable food production.

The report, “No Ordinary Matter: conserving, restoring and enhancing Africa’s soil“, notes that Africa suffers from the triple threat of land degradation, poor yields and a growing population.

"Political stability, environmental quality, hunger, and poverty all have the same root. In the long run, the solution to each is restoring the most basic of all resources, the soil." -- Rattan Lal

The Montpellier Panel has recommended, among others, that African governments and donors invest in land and soil management, and create incentives particularly on secure land rights to encourage the care and adequate management of farm land. In addition, the report recommends increasing financial support for investment on sustainable land management.

The publication of the report comes with the U.N. declaration of 2015 as the International Year of Soils, a declaration the Food and Agriculture Organisation (FAO) director general, Jose Graziano da Silva, said was important for “paving the road towards a real sustainable development for all and by all.”

According to the FAO, human pressure on the resource has left a third of all soils on which food production depends degraded worldwide.

Without new approaches to better managing soil health, the amount of arable and productive land available per person in 2050 will be a fourth of the level it was in 1960 as the FAO says it can take up to 1,000 years to form a centimetre of soil.

Soil expert and professor of agriculture at the Makerere University, Moses Tenywa tells IPS that African governments should do more to promote soil and water conservation, which is costly for farmers in terms of resources, labour, finances and inputs.

“Smallholder farmers usually lack the resources to effectively do soil and water conservation yet it is very important. Therefore, for small holder farmers to do it they must be motivated or incentivized and this can come through linkages to markets that bring in income or credit that enables them access inputs,” Tenywa says.

Before farmers received training on soil management methods, they applied fertilisers, for instance, without having their soils tested. Tenywa said now many smallholder farmers have been trained to diagnose their soils using a soil test kit and also to take their soils to laboratories for testing.

According to the Montpellier Panel report, an estimated 180 million people in Sub-Saharan Africa are affected by land degradation, which costs about 68 billion dollars in economic losses as a result of damaged soils that prevent crop yields.

“The burdens caused by Africa’s damaged soils are disproportionately carried by the continent’s resource-poor farmers,” says the chair of the Montpellier Panel, Professor Sir Gordon Conway.

“Problems such as fragile land security and limited access to financial resources prompt these farmers to forgo better land management practices that would lead to long-term gains for soil health on the continent, in favour of more affordable or less labour-intensive uses of resources which inevitably exacerbate the issue.”

Soil health is critical to enhancing the productivity of Africa’s agriculture, a major source of employment and a huge contributor to GDP, says development expert and acting divisional manager in charge of Visioning & Knowledge management at the Forum for Agricultural Research in Africa (FARA), Wole Fatunbi.

“The use of simple and appropriate tools that suits the smallholders system and pocket should be explored while there is need for policy interventions including strict regulation on land use for agricultural purposes to reduce the spate of land degradation,” Fatunbi told IPS

He explained that 15 years ago he developed a set of technologies using vegetative material as green manure to substitute for fertiliser use in the Savannah of West Africa. The technology did not last because of the laborious process of collecting the material and burying it to make compost.

“If technologies do not immediately lead to more income or more food, farmers do not want them because no one will eat good soil,” said Fatunbi. “Soil fertility measures need to be wrapped in a user friendly packet. Compost can be packed as pellets with fortified mineral fertilisers for easy application.”

Fatunbi cites the land terrace system to manage soil erosion in the highlands of Uganda and Rwanda as a success story that made an impact because the systems were backed legislation. Also, the use of organic manure in the Savannah region through an agriculture system integrating livestock and crops has become a model for farmers to protect and promote soil health.

Meanwhile, a new report by U.S. researchers cites global warming as another impact on soil with devastating consequences.

According to the report “Climate Change and Security in Africa”, the continent is expected to see a rise in average temperature that will be higher than the global average. Annual rainfall is projected to decrease throughout most of the region, with a possible exception of eastern Africa.

“Hence, in the absence of major interventions in capacity enhancements and adaption measures, warming by as little as 1.5C threatens food production in Africa significantly.”

A truly disturbing picture of the problems of soil was painted by the National Geographic magazine in a recent edition.

“By 1991, an area bigger than the United States and Canada combined was lost to soil erosion—and it shows no signs of stopping,” wrote agroecologist Jerry Glover in the article “Our Good Earth.” In fact, says Glover, “native forests and vegetation are being cleared and converted to agricultural land at a rate greater than any other period in history.

Adds Rattan Lal, soil scientist: “Political stability, environmental quality, hunger, and poverty all have the same root. In the long run, the solution to each is restoring the most basic of all resources, the soil.”