African Farmers Can Feed the World, If Only… 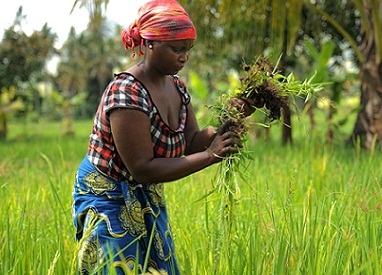 Climate-smart agriculture (CSA) is an approach that helps to guide actions needed to transform and reorient agricultural systems to effectively support development and ensure food security in a changing climate. Photo: FAO

ROME, Aug 8 2016 (IPS) - Can African farmers feed the world?. Apparently the answer is “yes.” Bold as it may sound, this statement is based on specific facts: Africa is home to 60-65 per cent of the world’s uncultivated arable land and 10 per cent of renewable freshwater resources, and it has registered a 160 per cent increase in agricultural output over the past 30 years.

This data was provided in July this year by the NEPAD (New Partnership for Africa’s Development), which is the technical body of the African Union (AU), and it reminds that the global population continues to soar, to approach around 10 billion by 2050.

NEPAD goes further and states that, given Africa’s share of the global population is forecast to rise from 15 per cent to 25 per cent, there’s a mounting appreciation that farmers on the second-largest continent –after Asia– will have to play a key role if this boom is to be managed successfully.

“We can and would be happy to feed the world,” said Raajeev Bopiah, general manager of the East Usambara Tea company, which produces over 4 million kilograms of tea a year on its 5,000 acres of land in Tanzania, NEPAD tells. “We just need the knowledge and the funding.” 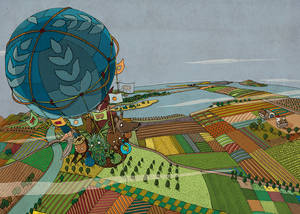 Through a new global video and poster contest, FAO is asked the world’s children to help it highlight how climate change is making the task of feeding a growing world population all the more challenging – and what we can all do, together, to meet that challenge. Image: FAO

There are a number of hurdles to boosting the fortunes of Africa’s farmers, says the NEPAD Planning and Coordinating Agency (NEPAD Agency), which is the AU implementing body that facilitates and coordinates the development of the continent-wide programmes and projects, mobilises resources and engages world’s institutions, regional economic communities and member states.

“One of the biggest obstacles is the messy system of tariffs and inflexible border policies that govern relations between many of the continent’s 55 states. Only 13 countries offer visa-free or visa-on-arrival entry to all Africans, according to this year’s Africa Visa Openness Report.

Businesses in landlocked nations in particular complain that shifting their produce across frontiers to ports is such a fraught exercise that they often incur huge losses in the process, the technical bit of the African Union reminds.

“Transportation in Africa is so hard. It’s expensive and sometimes risky,” NEPAD quoted Ahmad Ibrahim of African Alligator, a mostly Ugandan firm that started off hauling carpets and elevators before moving into the sesame and peanut trade. Ibrahim says border waits “can be long, and goods perish.”

Regional economic bodies like the Southern African Development Community (SADC) and the Economic Community of West African States (ECOWAS) have enjoyed some success in harmonising customs forms and improving at least a few cross-border transport links, but many say they don’t go far enough, says NEPAD in its report titled “African farmers say they can feed the world and we might soon need them” .

“Within their own states too, governments have exhibited a tendency to inadvertently stymie trade. Tanzania’s inconsistent tax regime, for example, has bounced farmers from one tax bracket to another. Those charged with balancing the books say it’s hard to plan far in advance for fear of finding oneself on the hook for unexpectedly high bills.”

“There’s no guarantee that it will remain constant for a long time, and that hurts. You can’t plan long-term when new taxes are imposed without taking into consideration what is affordable and what isn’t,” NEPAD quoted Raajeev.

Shoddy infrastructure also haunts large swathes of the continent. The transport network in northern Tanzania is so poor that Bopiah’s tea-producing company is severely limited in the weight of goods it can haul on the 70km journey to the port at Tanga on the Indian Ocean.

“You can’t transport more than four tons in a truck on mud roads-as opposed to the 20 tons I could do on proper roads. It’s costing me five times more!” Bopiah said.

In the most egregious recent example of the pitfalls of overwhelmed harbour facilities, at least 10 ships carrying 450,000 tons of emergency wheat for drought-stricken parts of Ethiopia earlier this year were kept waiting out at sea for weeks because the port at Djibouti couldn’t cope with the volume of incoming cargo, NEPAD reports.

And FAO adds that a shortage of silos and an erratic power supply also forces many food producers to turn to expensive diesel-fuelled generators in order to fire their water pumps and greenhouses. Some 30 per cent of all food produced across the world is lost to spoilage or waste.

A lack of adequate storage means “the continent loses food worth 4 billion dollars annually as post-harvest loss,” says Richard Munang, a senior official at the UN’s Environment Program. “Inefficiencies along Africa’s agro-value chains are the basis of food problems.”

Beyond infrastructure issues, corruption continues to undermine the hard work of small landholders and large agribusinesses alike. For companies that must haul their wares long distances or navigate bribe-happy transport hubs, it all cuts deep into their bottom line.

“For example, if you want to plant a certain crop, it could take five years for it to start paying itself back.”

Deprived of access to proper loans, many farmers are unable to buy some of the tools or chemicals that might enable them to boost their yields. In a continent where wheat yields can be as low as 1-1.5 tons per hectare (in comparison to 3 or 4 tons elsewhere), these limitations are intensely problematic.

As far as leading African agronomists are concerned, Africa is playing a desperate game of catch-up, according to the technical body of the African Union.

“We don’t have the time [that] developing countries had in the 60s. Today in Africa, not only do you have to produce better, but in a globalised world, you have to sell better too,” said Ousmane Badiane, Africa Director at the Washington D.C-based International Food Policy Research Institute (IFPRI), NEPAD reported.

“With a quarter of people in Sub-Saharan Africa currently going hungry, the stakes are desperately high, and states will have to deploy the full arsenal of modern tools if they’re to feed not only themselves but booming populations elsewhere.”

Now there is an additional huge hurdle challenging the capacity and willingness of African farmers to feed the world: a monster called climate change.