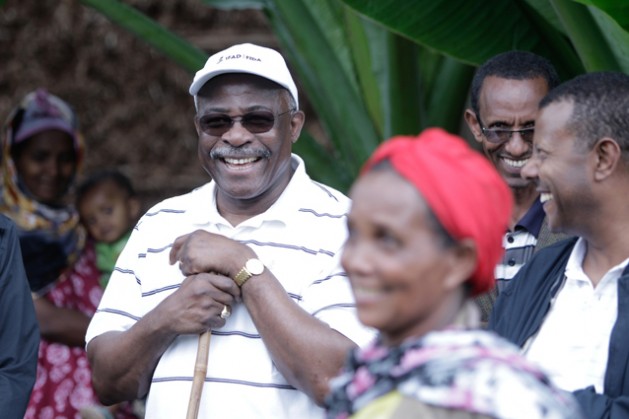 ROME, Oct 16 2016 (IPS) - The first Sustainable Development Goal calls for us to end poverty in all its forms everywhere by 2030. The goal and the deadline are ambitious – and they need to be. We do not have the luxury of time.

Poverty is so intertwined with hunger, migration, forced displacement, conflict and environmental degradation that prioritising its eradication is not only a moral and economic imperative, but essential to address the most pressing global issues of our time.

To eradicate poverty, we have to focus our attention on the rural areas of developing countries where three quarters of the world’s poorest and hungriest people live. 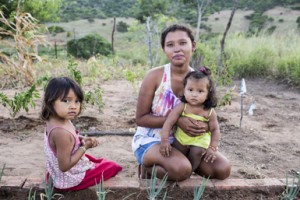 Ines Terodoro dos Santos, 17, with her daughters, Eliara, 14-months, right, and Isabel, 3-years-old, in the family garden at home, in Aldeia Segredo Velho, near Ribeira do Pombal, in the state of Bahia, Brazil, on Wednesday, April 13, 2016. Credit: ©IFAD/Lianne Milton/Panos

It is important to ask why the continent has not made progress in its fight against poverty, and what can be done about it.

Extractive natural resources account for three-quarters of sub-Saharan Africa’s total exports but the resulting billions of dollars in revenue have had a limited impact on poverty reduction.

In some cases, the promotion of these industries has been to the detriment of investments in agriculture. Yet studies show that growth in agriculture is up to 11 times more effective in reducing poverty than growth in any other sector in sub-Saharan Africa.

The potential of agriculture to create prosperity for millions of people cannot be underestimated. In fact, agriculture is the single largest employer in the world, providing livelihoods for close to 40 per cent of today’s workforce globally, and 60 per cent in Africa.

The untapped potential on the African continent is enormous. It has 25 per cent of the world’s arable land and half the world’s uncultivated land suitable for growing food crops.

The African population growth of 2.7 per cent annually means food demand will double every 30 years. Agriculture could lead African development, improve food security and job growth so that people can move out of poverty and will not need to leave rural areas in search of opportunities elsewhere.

But even with all this potential agriculture is, unfortunately, not the priority of many African leaders. In 2003, African governments pledged to allocate 10 per cent of national budgetary resources to agriculture and rural development within five years. Only 13 countries had met their targets by 2012.

Instead of developing its own agricultural sector, the continent spends US$35 billion on food imports annually – money that could be invested in creating domestic employment, particularly in rural areas. 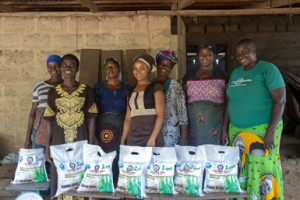 Some members of Nnedima rice cooperative with their bagged processed rice. The cooperative is comprises of 10 women collectively farming and processing rice. The results have been less effort and higher yields of quality rice thanks to the support the cooperative benefits from the IFAD Value Chain Development programme. Credit: ©IFAD/Andrew Esiebo/Panos

One of the study’s central findings is that targeted policies focused on transforming rural areas are essential to eliminate poverty.

These are policies that promote increased agricultural productivity and marketable surpluses, expanded off-farm employment opportunities and better access to services and infrastructure. These policy and investment choices have to be made. They do not happen on their own.

IFAD’s experience over nearly four decades has shown that when rural people have reliable access to land and other natural resources, functioning infrastructure, technologies, finance and markets, then both their livelihoods and their communities flourish, contributing significantly to economic growth.

Once we see smallholder farmers as rural entrepreneurs and their farms as viable and profitable businesses, the importance of investing in agriculture to ensure those businesses thrive becomes evident.

The result: rural areas become vibrant centres of employment and prosperity and the estimated 600 million young people in developing countries who will be looking for jobs over the next decade will not need to migrate to urban areas or beyond their counties’ borders to find opportunities elsewhere.

Of course, achieving poverty eradication is not just the responsibility of governments. It will require all actors – farmers, domestic investors along food value chains, research institutions, development agencies, educational institutions and others – to work together towards this common goal.

With visionary leadership, targeted investments and policies, and coordinated effort, poverty eradication is not just a lofty ideal. It is achievable – but we must recognise the urgency and act now.