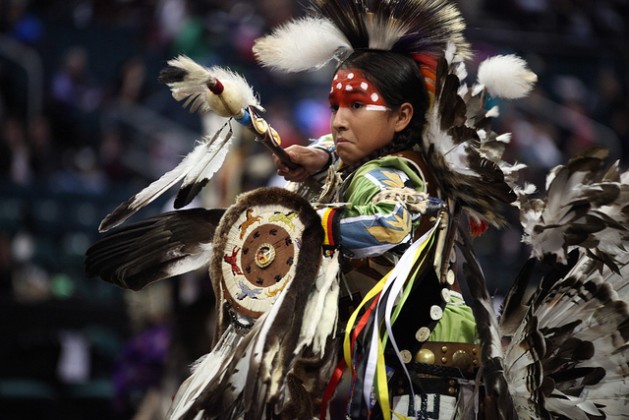 A traditional dancer at the Manito Ahbee Festival, a gathering that celebrates Indigenous culture and heritage to unify, educate and inspire. Credit: Travel Manitoba/cc by 2.0

LONDON, Nov 6 2016 (IPS) - The history of Canada’s indigenous population has been, for the most part, kept in the shadows.  According to leading expert on indigenous justice Lisa Monchalin, the consequences of colonialism and dispossession on native communities have been “glossed over”, unacknowledged and dismissed by the “settled” population.

At the launch of her new book “The Colonial Problem: An Indigenous Perspective on Crime and Injustice in Canada” earlier this month at University College London, Monchalin emphasised the impact colonial legacies have left on indigenous peoples in modern-day Canada.

During colonial times, she explained, the native population was compelled to become dependent on a foreign system which paid little heed to their own distinct culture and customs. European settlers suppressed the rights of the indigenous groups, rapidly establishing a European hierarchical structure which considered them nothing more than an “Indian problem”.

The colonial solution to the Indigenous “problem” was nothing short of deadly. As a direct result of European settlement, the native population became a vanishing race with an estimated 80 to 90 percent dying from diseases brought from Europe. In the 1700s, blankets infected with smallpox were distributed as a means of eradicating Indigenous peoples.

Those who did not die of disease were forcefully displaced. Many were pushed onto smaller parcels of land, obliged to culturally assimilate and abandon their traditions or left to die off in territories with few resources.

In many ways, Monchalin said, “colonisation can also be drawn back to the prevalence of violence against indigenous communities through the centuries, including acts of gender-based violence”.

Before colonisation, traditional native societies prided themselves on being matriarchal, honouring and valuing the “sacred” nature of women within their community. Women were granted a strong voice through positions of leadership and power and there was an equitable division of labor. “Acts of sexual violence were a rarity before European contact,” Monchalin said.

Under the European system of governance, native women were forcibly dispossessed of their agency. They could no longer be considered valiant leaders, rather, their colonisers wanted to enforce the message that they were little more than subordinates to the male members of the community. Under colonial rule, only men were accepted to speak on behalf of their communities.

The colonisers began to formulate the image of the native woman as an “exotic other”.  They referred to indigenous women as “squaws”, the female version of a savage. They described them as having “no human face, lustful and immoral”, Monchalin explained.

These ingrained colonial perspectives not only converted the native female identity into a sexualised commodity, it also led to the widespread sexual objectification of native women, with acts of sexual violence committed justified by the fact that these women were “human in form only”.

“In Canada, 87 percent of indigenous women will experience physical violence in her lifetime. One in three of these women will be raped,” she said.

Indigenous women continue to be victimized by the persisting structures of a dehumanizing colonial system which stripped them of their agency and considered them “lesser being”. This came to the fore in 2014 when 1,181 cases of missing native women between 1980-2012 were made public. The crisis was largely dismissed and a truth inquiry only established last year. Police brutality conducted against indigenous women has also been reported across the country.

Many believe that the historical legacy of Euro-centric suppression contributes to the ongoing issues of injustice and inequality demonstrated towards indigenous peoples. In 1873, one of the Royal Canadian Mounted Police’s (RCMP) main objective was to address the “indigenous problem”, the goal being the “silent surrender” of the native people.

This led to the creation of “residential schools”, government-funded schools responsible for educating aboriginal children in Canada. The Canadian government developed a policy called “aggressive assimilation”. They believed that a church-run, industrial boarding school was the best way to prepare them for life in mainstream society and ultimately, abandon their “savage” traditions.

However, this government initiative took a turn for the worse. Native children were subjected to violence and abuse. Sexual abuse was found to reach epidemic levels within the schools and some children were even reported to have been used for “nutritional experiments”. After over a century of “state-sponsored violence”, the last residential school closed in 1996.

The need to suppress, silence and condemn a people based on their ethnicity has led to state-induced violence and mistreatment of native peoples by state authority to the present day. Systemic issues of racism and discrimination “legitimize” acts of police brutality and unjust incarceration of indigenous peoples. In fact, there’s a clear Indigenous overrepresentation in the Canadian prison system, with roughly 4.3 percent of the total population incarcerated.

The legacy of colonial injustice persists today for aboriginal peoples in Canada subjected to abuse, violence, and prejudice daily. Seven generations of residential school victims, deep-rooted female exploitation, state-induced violence, and unlawful incarceration, amongst a host of other atrocities, has led to a build-up of intergenerational trauma within indigenous communities across the country, she said.

However, Canada’s federal government has begun to address the widespread neglect and failed policies felt by past generations of indigenous people.

Prime Minister Justin Trudeau has publicly declared his commitment to beginning a new prosperous relationship between Canada and its indigenous people. “No relationship is more important to me and to Canada than the one with First Nations, the Métis Nation, and Inuit,” he said at the assembly of First Nations in December 2015.

Canada plans to invest 8.4 billion dollars over five years, beginning in 2016–17, to improve the socio-economic conditions of Indigenous peoples and their communities and bring about transformational change.

“Through education, awareness raising and a willingness to confront and question the violent past, the people of Canada can finally celebrate Indigenous identity and ultimately, reconstruct their rich traditions that were forcibly broken down under colonialism,” Monchalin concluded.