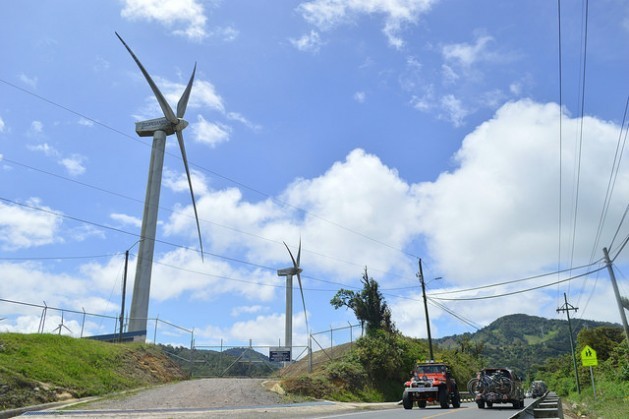 In Costa Rica, seven percent of the electricity generated now comes from wind power, thanks to wind farms like this one in the mountains of La Paz y Casamata, 50 km from San José. The decarbonisation of energy sources is a commitment that most Latin American countries have assumed. Credit: Diego Arguedas Ortiz/IPS

SAN JOSE, Nov 5 2016 (IPS) - With the ratification and entry into effect of the Paris Agreement still fresh, the countries of Latin America are heading to the climate summit in Marrakesh in search of clear rules that will enable them to decarbonise their economies to help mitigate global warming.

Approved on Dec. 12, 2015 at the 21st Conference of the Parties (COP21) of the United Nations Framework Convention on Climate Change (UNFCCC) in Paris, the historic agreement to curb the rise in global temperatures merely laid the foundations of the global architecture, and what lies ahead is the painstaking task of defining the fine print.

This process will take years, according to experts and negotiators who talked to IPS. But Latin America can push forward in three fields that will be key to transforming the region’s economies: technology, technical capabilities and financing.

“All of these instruments of international cooperation will have to work differently from here on out,” said Andrea Meza, director of climate change issues in Costa Rica’s Environment and Energy Ministry.

Negotiators from 195 states parties to the UNFCCC will meet Nov. 7-18 in COP22 in Marrakesh, Morocco to work out the practical details of the decisions reached in Paris to curb global warming and its effects on the world climate.

The climate agreement entered into force in record time, on Friday Nov. 4, after more than half of the countries, representing over 55 percent of global greenhouse gas emissions – the minimum threshold set – deposited their instruments of ratification by Oct. 5. So far, 97 states parties have ratified it.

To that end, each nation must transform its economy, up to now dependent on fossil fuels: oil, natural gas and coal.

This poses important questions, such as: how will these changes be financed in low-income countries? What experts will help implement them in each country? Who will receive the royalty payments for technologies like solar panels and electric cars?

With respect to climate change, the countries of Latin America are in a unique position: with relatively stable economies and only one country on the list of least developed countries (Haiti), international cooperation to help them reach their goals is necessary, but takes a different focus.

Like other regions of the developing South, Latin America needs financial support, accompanied by other “means of implementation”: technology transfer and capacity building. 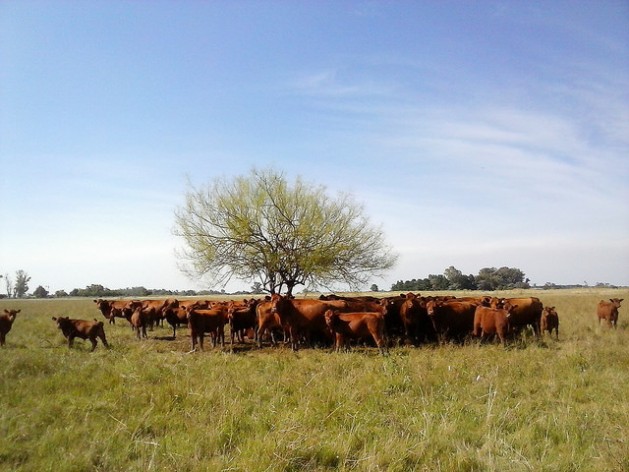 Latin America produces 23 percent of the world’s beef, but this flourishing industry shares a large part of the responsibility for the greenhouse gases produced by the region. The photo shows a small herd of cattle seeking shade under the lone tree in their pasture in Argentina’s pampas. Credit: Fabiana Frayssinet/IPS

“With the technical assistance we have, our countries will not be able to bring about the necessary transformation,” said Meza, Costa Rica’s national negotiator in the COP process since 2015.

This year, Costa Rica heads the Independent Association of Latin America and the Caribbean (AILAC), which also groups Chile, Colombia, Guatemala, Honduras, Panama, Peru and Uruguay. Meza explained that they would advocate together for clarifying and moving forward the agenda.

Latin America faces the two-pronged challenge of doubling the energy supply by 2050 while doing so with clean sources and without producing greenhouse gas emissions.

At the same time, the region needs to transform its economy which is heavily dependent on intensive land-use activities such as large-scale cattle breeding and agriculture, which along with transportation and electric power generation are Latin America’s major emissions-generating activities.

A central element in the discussions at COP22 will be the 100 billion dollars a year that industrialised countries committed to mobilising by 2020 to help developing countries cut emissions and adapt to climate change.

Although that pledge was made six years ago, at COP16 in Cancun, Mexico, it is still unclear how it will translate into reality.

“There are expectations in Marrakesh that we will have more positive signals with respect to how climate financing will come about. For now, it’s just more of the same,” Brazilian economist Natalie Unterstell told IPS.

She said these financial decisions will help accelerate the region’s transformation, because when they presented their Intended Nationally Determined Contributions (INDCs), many of them included targets conditional on international financing.

Not only that: some Latin American countries have experienced major changes in their political or economic situations, said Unterstell, a member of the Climate Finance Group of Latin America and the Caribbean (GFLAC), a regional initiative by a group of civil society organisations.

The expert cited the example of her country, explaining that “Brazil is undergoing a major economic and financial crisis, which means no new funds are available.”

In the Paris Agreement, developed countries committed once again to their collective goal to mobilise 100 billion dollars a year, but crucial details regarding how to make this commitment a reality were still lacking.

What emerges in Morocco could provide incentives for companies and international organisations to offer funding.

“We have to work hard with the private sector, which needs to send out clear signals to know where to invest,” Unterstell said.

Because of its renewable energy potential and its economic and social conditions, the region is now attractive for investors.

The Climatescope 2015 report published by Bloomberg New Energy Finance listed four Latin American nations – Brazil, Chile, Mexico and Uruguay – among the 10 most attractive countries for investment in clean energy of the 55 studied in Latin America and the Caribbean, Africa and Asia.

This region received a total of 23 billion dollars in investment in renewables in 2014 – 49 percent more than during the previous year, according to the report.

“Despite the overall slowdown, the Economic Commission for Latin America and the Caribbean (ECLAC) said investment in renewable energies has been one of the most dynamic sectors in the region,” Guy Edwards, a research fellow specialising in the politics of climate change in Latin America at Brown University’s Center for Environmental Studies in Rhode Island, USA, told IPS.

So while there is money, it is not enough to address the impacts of climate change, an area with huge financial needs.

An ECLAC report calculated in 2014 that climate change could cost between 1.5 and 5.0 percent of the region’s GDP.

The experts who spoke to IPS say that in order to deal with the impact of climate change not only money is needed but also technical assistance and technology transfer, and the summit in Morocco will decide how it is to be distributed.

“Latin America has always had the problem that since they are not the poorest, they are not first in line to receive support,” Edwards said.

This could get even more complicated in Morocco. Latin America’s negotiators are carefully following an initiative by the African bloc to put the nations of that region on the list of countries most vulnerable to climate change, an initiative that would give them priority in access to financing along with small island states and the least developed countries.