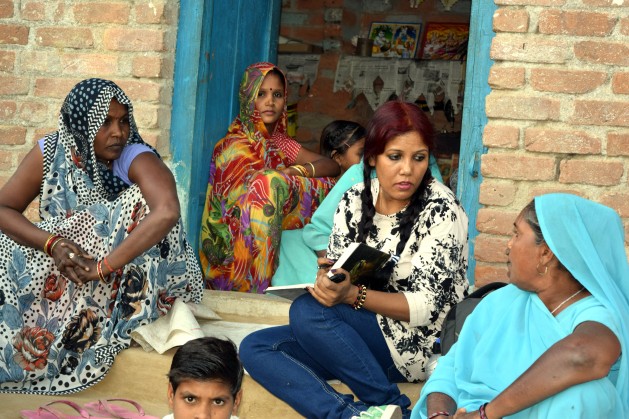 Paul interviews Dalit women in Hamirpur - a district in Northern India. All of these women have been abandoned by their husbands who fled to escape drought. Credit: Stella Paul / IPS.

NEW YORK, Nov 6 2016 (IPS) - Journalist Stella Paul was midway through an interview about toilets when she found herself, and the women she was speaking to, under attack from four angry men.

“This man, he comes and he just grabs this woman by her hair and he starts dragging her on the ground and kicking her at the same time,” Paul told IPS.

She remembers thinking, “what is happening,” as another three men followed, beating the women, including Paul who was hit in the face.

“They are blindly just beating this woman.”

“Why? Because how dare you talk about getting a toilet when you are untouchable, you are Dalit.”

The attack took place while Paul – a 2016 recipient of the International Women’s Media Foundation Courage in Journalism Award and IPS contributor – was researching a story about women forced into dual slavery in illegal mines in South-East, India.

The women Paul was interviewing had been forced to work unpaid in the mines, but were trying to escape, some of them were attending school, and they had now found out they were potentially going to have their own toilet under a government sanitation scheme.

“They employ the poorest of the people, and they bring in a lot of women that are from the untouchable section – Dalit – and the extremely marginalised classes in India.”

“It was revealed that the whole industry was illegal – no license taken from the government – and they were taking out iron ore and selling it to China.”

“So it’s dual slavery, they don’t get paid, and they have to allow these men to sleep with them, and their daughters.”

Paul, who comes from North-Eastern India, travels her home country talking to some of the poorest people in India and unearthing stories of unbelievable exploitation and corruption in places where other journalists often think not to look.

She often spends her time listening to the stories of untouchables – people who other Indians don’t consider worthy of having opinions.

“When you are untouchables your life is no better than a dog’s life. Your job is to go there and defecate in the open, because that is how you have always done and that is how you will always do.”

“Honestly I don’t feel anybody will tell these stories of these women of dual slavery, of (the) little changes that they are making in the face of huge threats.”

“I don’t see these stories anywhere, I don’t think anybody will tell them and how can I not tell their stories? So that’s my choice to go there and tell it.”

But Paul believes that although her kind of journalism often comes with little recognition she is also constantly rewarded.

“Once you start going there, meeting these people you can never become a bitter cynical skeptical person who will look down on poor people,” she says.

Listening to these stories has helped her grow in empathy and become a better person, she says.

“That is the best bonus of being a journalist, that there is this huge growth potential, internal growth.”

Yet by listening to the disenfranchised, Paul often finds herself getting into trouble, as was the case when her interviews with the women about toilets uncovered local corruption. 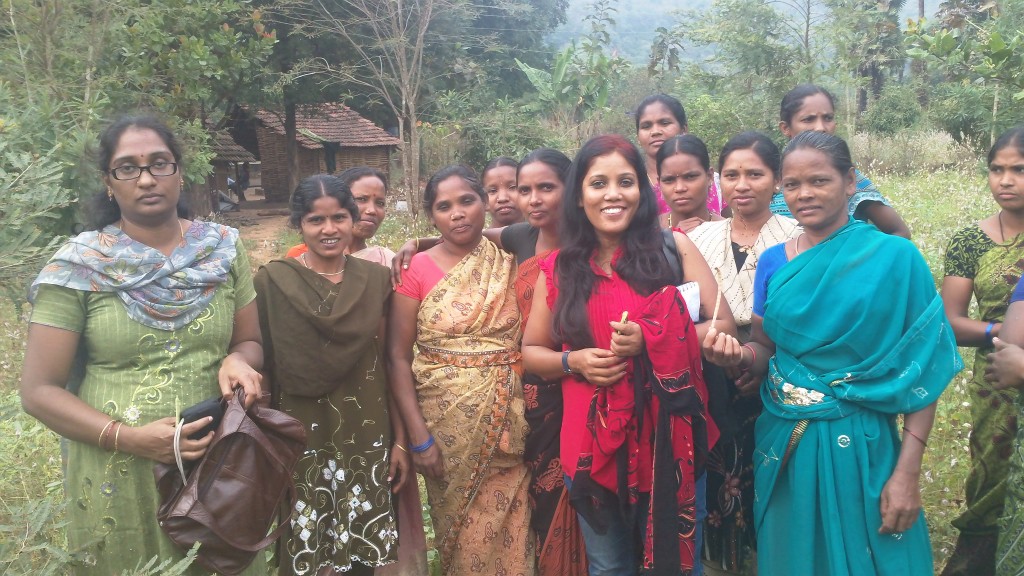 “It was a positive story on how a section of these women are now coming out of (slavery).”

“I was there in a village and there was a group of women (telling me) they have started going to school … they are going to rebuild their lives.”

Yet by daring to talk about having their own toilets the women had stepped into dangerous territory.

The government of India had allotted funds to the state as part of an anti-defecation drive.

More than 500 million people in India, almost half of the total population, still defecate in the open. According to UNICEF open defecation is a serious threat to public health and an underlying reason why 188,000 children under five die from diarrhea every year in India.

“There is a lot of money that is coming in and these men, the local government, they are actually stealing this money,” said Paul.

This is why the women talking to Paul about toilets was met with violence.

After getting punched again while rescuing a girl she had asked to take photos for her, Paul marched straight to the office of a senior local official.

But the commissioner sat behind a transparent window clearly unoccupied while his receptionist told Paul he was too busy to see her.

Paul didn’t give up, returning the next day.

“We finally got to meet him, but what I wanted was not to complain about what happened to me but to interview him about … the sanitation project because I wanted to get my story first.” she said.

The commissioner pretended not to understand Paul’s English or Hindi.

“Finally he gave me one sentence and I could complete my story.”

Paul herself comes from a part of India officially designated as a “disturbed region.”

“My home province is in the North Eastern part of India, which borders China, Myanmar, Bangladesh, Bhutan and Nepal.”

“The army has a special power act and under a law they are legally authorised to go and take special action against people there.”

“Therefore security forces (can go) to anybody’s home without a warrant at any time of the night or the day.”

“There is rampant gender violence there committed by the army.”

Paul says that even in apparently peaceful parts of India, gender violence “is rampant” and “women reporters are specifically targeted.”

“A guy reporter never has to worry about being touched inappropriately, groped, assaulted, molested or raped.”

She says that reporting on development issues like gender violence or gender inequality is difficult because a lot of people, including government officials, don’t believe these issues are important.

“Without these issues being solved there is no real progress, no real development so we have to report on them, but then there are people who believe that these issues do not matter which makes you feel very lonely.”

Paul herself almost did not survive childhood because she was born a girl. When she was 2 years old, and sick with diptheria, part of her family did not see it as worth treating her, because she was a girl. She survived because her mother fought to save her.

Paul has gone on to write about infanticide for IPS.

Courage in journalism often focuses on reporting on war zones, but reporting on gender violence is also a form of war reporting, Chi Yvonne Leina, a journalist from Cameroon and Africa Lead at World Pulse told IPS.

“Violence against women is the longest most continuous and the most dangerous war we are having on earth.”

“Stories like what (Stella) tells – people don’t necessarily know until they dig through in the community,” said Leina.

But this digging can lead to negative reactions, says Leina.

“When you are attacking a culture, you are alone… when soldiers go to war they are going in numbers but when you as a reporter are in face of a culture coming against the culture alone, you are alone against a whole community.”

“Anything can happen and maybe you can disappear, where I come from journalists disappear, they don’t die they disappear.”

Paul has received threats both anonymous and to her face that she too will be made to disappear. While reporting on brick kilns using child labour in her home state a man grabbed her phone and threw it in the river.

“He said: ‘do you see that phone it didn’t take seconds to disappear in the river we make people disappear just like that,’ and then he was snapping his fingers,” Paul described.

Paul is one of three 2016 recipients of the Courage in Journalism Award, alongside Janine di Giovanni, Middle East Editor of Newsweek and Mabel Cáceres Editor-in-chief of El Búho Magazine.

The awards were presented at ceremonies held in New York and Los Angeles in late October. Reeyot Alemu, of Ethiopia the 2012 recipient of the award was also honoured at the ceremony – she was previously unable to attend after being jailed for 1963 days.