When Your Healers Become Your Killers

Since the introduction of penicillin in the middle of the 20th century, antimicrobial treatments have been used not only in human medicine but in veterinary care as well. But their excessive use in livestock (and aquaculture) contaminates the environment and contributes to a rise of resistant microorganisms, posing threats to human health, animal health, food security and people’s livelihoods. Photo: FAO

ROME, Jan 11 2017 (IPS) - There is a major though silent global threat to human and animal health, with implications for both food safety and food security and the economic well-being of millions of farming households. It is so-called anti-microbial resistance.

The problems arises from the indiscriminate, excessive use of synthetic products, such as anti-microbial medicines, to kill diseases in the agricultural and food systems, which may be a major conduit of the anti-microbial resistance (AMR) that causes 700,000 human deaths each year and has the potential to raise this number to up to 10 million annually.

AMR is a natural phenomenon of micro-organisms such as bacteria, viruses, parasites and fungi that are no longer sensitive to the effects of antimicrobial medicines, like antibiotics, that were previously effective in treating infections.

Nevertheless, commercial practices meant to increase benefits have been leading to the dramatic fact that these drugs are more and more used to practically solely promote animal growth.

"Anti-microbial Resistance has the potential to be even more deadly than cancer, to kill as many as 10 million people a year" – UN

“The world is in the midst of a different kind of public health emergency, one that is just as dramatic but not as visible. Except for the headline-grabbing ‘superbugs’, anti-microbial resistance (AMR) doesn’t cause much public alarm,” the heads of three international organisations dealing with human and animal health have warned in a joint article published in the Huffington Post.

AMR Could Be More Deadly than Cancer

“But AMR has the potential to be even more deadly than cancer, to kill as many as 10 million people a year and, according to a recent review undertaken by the United Kingdom, to cost the world economy as much as 100 trillion dollars annually,” added the Directors-General of the World Health Organization (WHO), the Food and Agriculture Organization of the United Nations (FAO), and the World Organisation for Animal Health.

According to them, if left unchecked, AMR will make chemotherapy and common dental and surgical procedures increasingly risky, as infectious complications become difficult or impossible to treat. The gains in health and longer lives of the 20th century are at stake.

In addition to the growing high number of human deaths each year that are estimated to be related to anti-microbial resistant infections, the AMR further poses a major threat to food safety and security, livelihoods, animal health and welfare, economic and agricultural development worldwide, warn United Nations specialised agencies.

The global use of synthetic products to indiscriminately kill bacteria, viruses, parasites and fungi in agricultural and food systems requires a concerted effort to map, understand and mitigate the risks of AMR, says FAO.

While anti-microbial resistance was first described in 1940, scientific understanding of the myriad of pathways by which resistance emerges and spreads remains in its infancy, according to its report titled Drivers, Dynamics and Epidemiology of Antimicrobial Resistance in Animal Production.

AMR may be a natural genomic process for bacteria, but it was very rare in clinical isolates predating the introduction of antibiotics, the 67-page technical report notes.

“As foods from around the globe are today frequently contaminated with antibiotic resistant E. coli and Salmonella, measures which encourage the prudent use of antimicrobials are likely to be extremely useful in reducing the emergence and spread of AMR.”

In view of this growing health challenge, three international organisations –FAO, WHO and the World Organisation for Animal Health — held last November a World Antibiotic Awareness Week to raise awareness of one of the biggest threats to global health.

The report summarises the magnitude of AMR in the food and especially the livestock sector, which is expected to account for two-thirds of future growth in antimicrobial usage.

The need to support and pursue more research — involving both molecular sequencing and epidemiological analyses — into factors influencing how and why resistant bacteria become incorporated into human and animal gut micro-biomes as well as the need to create standardised monitoring procedures and databases so that adequate risk-assessment models can be built, are some of the report’s recommendations.

Use of anti-microbials solely to promote animal growth should be phased out, the UN agency stressed. Instead, alternatives to antibiotics to enhance animal health — including enhanced vaccination programmes — should be more vigorously pursued.

Antimicrobial Residues in the Environment

Antimicrobial residues in the environment, especially in water sources, should be tracked in the same way as other hazardous substances, the report urges.

“Given our current limited knowledge of transmission pathways, options to mitigate the global spread of AMR involve controlling its emergence in various environments, and minimizing the opportunities for AMR to spread along what may be the most important routes.”

While cautious about how much remains unknown, the report’s authors — experts form the Royal Veterinary College in London and FAO experts led by Juan Lubroth — highlight compelling evidence of the scale of the threat.

For instance, U.S. honeybees have different gut bacteria than is found elsewhere, reflecting the use of tetracycline in hives since the 1950s.

Fish farms in the Baltic Sea show fewer AMR genes than aquaculture systems in China, which are now reservoirs of genes encoding resistance to quinolones — a critical human medicine whose use has grown because of increasing resistance to older anti-microbials such as tetracycline.

The recent detection of resistance to colistin, until recently considered a last-ditch antibiotic in human medicine, in several countries also underscores the need to scrutinise livestock practices, as the drug has been used for decades in pigs, poultry, sheep, cattle and farmed fish.

The report focuses on livestock because future demand for animal-based protein is expected to accelerate intensive operations — where animals in close contact multiply the potential incidence of AMR pathogens. 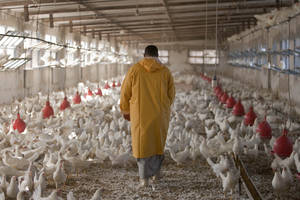 A poultry operation in Egypt. Good hygiene on farms can help stem the rise of AMR due to over-reliance on anti-microbials. FAO

Cases in Tanzania and Pakistan also demonstrate the risk of AMR coming from integrated aquaculture systems that use farm and poultry waste as fish food.

As animals metabolise only a small fraction of the antimicrobial agents they ingest, the spread of anti-microbials from animal waste is an important concern, it says.

While smallholder systems may rely less on anti-microbials, they often use over-the-counter drugs without veterinary advice. Inappropriate, sub-lethal, dosing promotes genetic and phenotypic variability among the exposed bacteria that survive.

Finally, the report says that working collaboratively across all sectors and aspects of food production, from farm to table, will provide an essential contribution to an integrated one-health approach to combat AMR.