*This story updates Raped and Abandoned by the Law published on May 3, 2014. 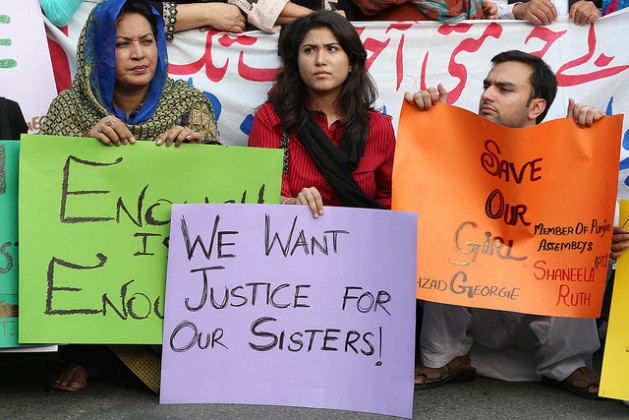 Protesters gather outside the Lahore Press Club in the capital of Pakistan's Punjab province on July 12, 2016 to demand justice for victims of sexual violence. Credit: Irfan Ahmed/IPS

LAHORE, Feb 3 2017 (IPS) - Amid a wave of reforms to tighten the country’s laws on honour killings and sexual assault, on Feb. 2, the Sindh Assembly passed a law making DNA testing in rape cases mandatory in the province.

It follows on the heels of a unanimous vote by Pakistan’s Parliament last October to plug gaps in the criminal justice system and boost the rate of conviction in rape cases.

The conviction rate for rape in Pakistan has been less than four percent, prompting protests and legal reforms.

For long, the sole reliance on eyewitnesses and circumstantial evidence has benefitted the accused in rape cases and conviction rates have remained negligible in the country.

It also gives approval to holding of in-camera trials and use of technological aids to record testimony of victims and witnesses in order to save victims from humiliation. In the past, many victims and their families would not pursue cases for this very reason.

Another important feature of the law is that it tries to ensure protection of victims’ identity in the media. Those who violate victims’ privacy face jail terms of up to three years and fines. Mass media in the past has been criticised for disclosing names and sometimes even publishing the pictures of rape victims.

Fauzia Viqar, chairperson of the Punjab Commission on the Status of Women (PCSW), told IPS that the law will require police to collect evidence from rape victims in the presence of a female officer.

She added that stringent action has also been recommended in cases of custodial rape by police officers. Furthermore, the past conduct of a rape victim and her acquaintance with the alleged rapist will not imply that the sexual act was done with the former’s consent, as it would often happen in the past.

Cases “mishandled from the very start”

Amina Bibi, an 18-year-old from Pakistan’s Punjab province, was allegedly raped by four men on Jan. 5, 2014. All the accused were granted bail. A desperate Amina set herself on fire outside a police station on Mar. 13 that year and succumbed to her burn injuries the next day.

The Supreme Court of Pakistan took up the case and sought a report from police. The report was presented Apr. 21, 2014, only to be dismissed by the court. The report claimed that Amina had not been raped – something the court was not ready to believe, especially when it could find no other reason for her suicide.

Amina’s case trained the spotlight on the plight of thousands of rape victims in Pakistan who suffer due to flaws in the criminal justice system, socio-cultural inhibitions, the negative attitudes of investigators, police failure to collect evidence and the humiliation of victims in trial courts.

According to the National Police Bureau (NPB) of Pakistan, around 3,000 cases of rape are reported every year – 3,173 cases were reported in 2012 and 3,164 in 2013. The conviction rate, however, is less than four percent, according to a report released by the NGO War Against Rape (WAR).

“One of the foremost reasons for the poor conviction rate is rape cases are mishandled from the very start,” Asad Jamal, a Lahore-based lawyer who has represented several rape victims, told IPS.

He says very few police officials know how to collect scientific evidence in rape cases or record the statements of traumatised rape victims. Citing the example of a case he is fighting right now, Jamal says the police investigator concerned even forgot to preserve the clothes that the victim was wearing at the time of the sexual assault.

In the case of Amina Bibi too, it was found that police had failed to conduct timely forensic and DNA tests. Punjab Chief Minister Shahbaz Sharif suspended several senior police officers and ordered the arrest of others in connection with the case.

Jamal said sometimes police insist on including the names of fake witnesses to strengthen rape cases but such practices end up benefiting the accused, especially in appellate courts. “Ideally, scientific and DNA evidence should be enough to convict an accused, but unfortunately trial courts depend a lot on eyewitnesses for primary evidence,” he says.

Jamal pointed to another reality – rape victims often belong to disadvantaged sections of society while rapists are mostly powerful people.

He says crime data indicates that girls in the 9-19 age group from lower income families are most vulnerable to rape. “That’s why the number of domestic workers subjected to rape is on the rise,” he said.

Zia Awan, founder of the Madadgar National Helpline for women and children, told IPS, “The number of rape cases reported in Pakistan is only a fraction of the actual number.”

He receives a large number of calls from women who are undecided on whether to report the case or remain silent in order to avoid humiliation and life-long stigma. The impunity of rapists and the ordeal of rape victims deter the latter from seeking justice, he says.

“The shameful attitude of society, police and lawyers towards rape victims is the biggest hurdle in securing justice,” said Faisal Siddiqui, a Karachi-based lawyer.

His own client, a rape victim, had to seek psychological treatment for two years after appearing in court for cross-examination, he says. The defence lawyer, he says, asked her about the minutest details of the assault and made her recall the traumatic incident over and over again.

Unfortunately, he says, many lawyers deliberately confuse rape victims during cross-examination in order to get relief for the accused. “They ask shameful questions which no woman can answer.”

Sources privy to rape investigations reveal that due to socio-cultural mores police usually try to put the blame on complainants and prove that rape victims are women of loose morals. Their perception is that a woman who has really been raped would not dare to report the crime out of shame and fear of public humiliation.

If the victim has had any association with the alleged rapist or has been socially active or has a ‘modern’ lifestyle, police tend to believe that her allegations are fabricated.

In the past, legal provisions in Pakistan also made this possible. Shahid Ghani, a Lahore-based lawyer, cites such a provision: “When a man is prosecuted for rape or an attempt to ravish, it may be shown that the prosecutrix was of generally immoral character.”

He says this provision allowed for looking into a victim’s history to prove that she may not be innocent and may be sexually active.

Inspector Amjad Naeem, master trainer at the Police Training College, Lahore, said there has to be an element of empathy in rape cases and special care must be shown by investigators in seeking information from victims.

“The victim has to be told not to change clothes, wash herself or go to the washroom before evidence is collected,” he told IPS. “In case it is necessary to go to the washroom, the urine and stool should be collected for later examination.”

Thanks to a project called Gender Responsive Policing (GRP), launched by the German development agency GIZ in collaboration with NBP, many policymakers have begun to believe that more women should join the police force and handle cases of violence against women.

Ali Mazhar, communication manager at GIZ, told IPS that a large number of policewomen have been trained under the programme to understand cases of violence against women.

Under the programme, he says, Ladies Complaint Units (LCUs) are being set up at police stations where women officers attend to women’s complainants in an environment that is free of harassment and fear.