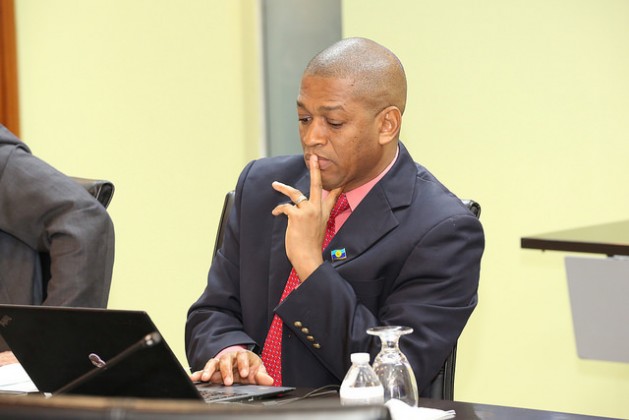 KINGSTON, Jamaica, Apr 30 2017 (IPS) - Climate change remains inextricably linked to the challenges of disaster risk reduction (DRR). And according to the head of the United Nations Office for Disaster Risk Reduction (UNISDR), Robert Glasser, the reduction of greenhouse gases is “the single most urgent global disaster risk treatment”.

Glasser was addressing the Fifth Regional Platform for Disaster Risk Reduction (DRR) in the Americas. Held recently in Montreal, the gathering included more than 1,000 delegates from 50 countries, including the Caribbean.

“We recognise that reducing greenhouse gas emissions is arguably the single most urgent global disaster risk treatment, because without those efforts our other efforts to reduce many hazards and the risks those pose to communities would be overwhelmed over the longer term,” Glasser said.

The conference, hosted by the Canadian government in cooperation with UNISDR marked the first opportunity for governments and stakeholders of the Americas to discuss and agree on a Regional Action Plan to support the implementation of the Sendai Framework for DRR 2015-2030.

The Sendai Framework is the first major agreement of the post-2015 development agenda, with seven targets and four priorities for action. It was endorsed by the UN General Assembly following the 2015 Third UN World Conference on Disaster Risk Reduction (WCDRR). The Framework is a 15-year, voluntary non-binding agreement which recognises that the state has the primary role to reduce disaster risk but that responsibility should be shared with other stakeholders including local government, the private sector and other stakeholders.

“The regional plan of action you will adopt . . . will help and guide national and local governments in their efforts to strengthen the links between the 2030 agenda for Climate Change Adaptation and Disaster Risk Reduction as national and local DRR strategies are developed and further refined in line with the Sendai Framework priorities over the next four years,” Glasser said.

The Caribbean is a minute contributor to global greenhouse gas emissions but will be among the most severely impacted.

The region is already experiencing its impacts with more frequent extreme weather events such as the 2013 rain event in the Eastern Caribbean, extreme drought across the region with severe consequences in several countries; the 2005 flooding in Guyana and Belize in 2010.

Inaction for the Caribbean region is very costly. An economic analysis focused on three areas – increased hurricane damages, loss of tourism revenue and infrastructure – revealed damages could cost the region 10.7 billion dollars by 2025. That’s more than the combined Gross Domestic Product (GDP) of all the member countries of the Organisation of Eastern Caribbean States (OECS).

At the Montreal conference, Head of the Caribbean Disaster Emergency Management Agency (CDEMA) Ronald Jackson was a panelist in a forum discussing the linkages between disaster risk reduction, climate change and sustainable development. He said the region needs to marry its indigenous solutions to disaster risk management with modern technology.

“We’ve recognised that in the old days, our fore parents…had to deal with flood conditions and they survived them very well. There were simple things in terms of how they pulled their beds and other valuables out of the flood space in the house in particular. This contributed to their surviving the storms with minimal loss,” Jackson said.

“That knowledge of having to face those adverse conditions and surviving them and coping through them and being able to bounce back to where they were before, that was evident in our society in the past. It has subsequently disappeared.”

CDEMA is a regional inter-governmental agency for disaster management in the Caribbean Community (CARICOM). The Agency was established in 1991 with primary responsibility for the coordination of emergency response and relief efforts to participating states that require such assistance.

Another regional agency, the Belize-based Caribbean Community Climate Change Centre (CCCCC) is collaborating with other agencies on the Caribbean Risk Management Initiative (CRMI).

The CRMI aims to provide a platform for sharing the experiences and lessons learned between different sectors across the Caribbean in order to facilitate improved disaster risk reduction.

He explained that there are a range of activities carried out specifically in terms of climate adaptation that will also have a disaster risk reduction element.

“We are looking at enhancing water security within a number of our small island states. One of the things we are focusing on there is largely to produce quality water through the use of reverse osmosis systems but we’re utilizing a renewable energy source. So, on the one hand we are also addressing adaptation and mitigation.”

Meantime, CCCCC’s Deputy Executive Director Dr. Ulric Trotz said the agency is rolling out a series of training workshops in 10 countries to share training tools that were developed with the aim of assisting in the generation of scientific information and analysis to help in making informed decisions. These include the Weather Generator (WG), the Tropical Storm Model/ Simple Model for the Advection of Storms and Hurricanes (SMASH), and the Caribbean Drought Assessment Tool (CARiDRO).

“The CARIWIG [Caribbean Weather Impacts Group] tool is a critical tool in that it more or less localizes the projection so that for instance, you can actually look at climate projections for the future in a watershed in St. Kitts and Nevis. It localizes that information and it makes it much more relevant to the local circumstance,” said Dr. Trotz.

Training and application of the tools will allow decision-makers to better understand the potential impacts of drought, tropical storms, and rainfall and temperature changes. When combined with other data and information, they can help to build a picture of potential impacts to key economic sectors in the various countries.