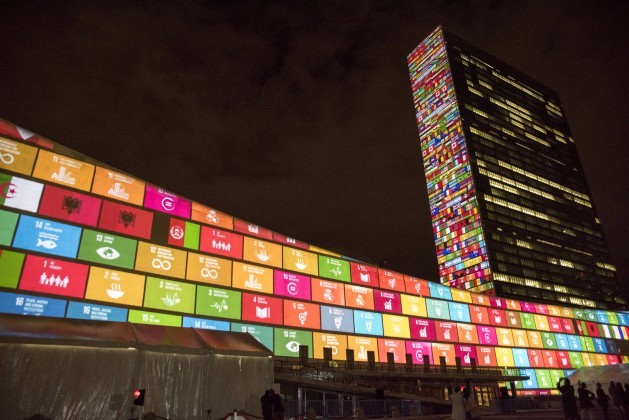 UNITED NATIONS, May 30 2017 (IPS) - Over the past five years, I have written with a number of co-authors the history of the sustainable development movement at the global level prior to the first UN Conference on Human Environment held in 1972 through the 1992 Earth Summit and Rio+20 to the adoption of the Sustainable Development Goals and the Paris Climate Agreement. I like to think of these books as the ‘Vienna Café Trilogy’ after the café in the basement of the United Nations headquarters in New York, where many deals are done over coffee. Also, with deference to the Hitchhiker’s Guide to the Galaxy: A Trilogy in Five Parts, this trilogy may also have future books.

In light of the anniversaries and the political landscape in which we currently find ourselves, I thought it would a good time to review where we are and the state of the discourse on sustainable development.

Writing these books did give me a broader perspective than that of living in the moment. The journey towards a planet which can sustain our consumption and production patterns has been a long one. At each advance, we have faced the reality that policy development in any particular area is impacted by global reality in other areas. After the first UN Conference on Environment held in Stockholm in 1972, the world had to deal with the impacts of the 1973 Yom Kippur War. This saw oil prices rise from US$3 per barrel to US$12 globally, rising even higher in the United States. This energy crisis due to the Organization of Arab Petroleum Exporting Countries oil embargo. This negatively impacted on the implementation of the Stockholm agreements.

“The roadmap that started in Stockholm, continued in Rio and Johannesburg and in Rio-20 must now become a reality. Our essential unity as peoples of the Earth must transcend the differences and difficulties which still divide us. You are called upon to rise to your historic responsibility as custodians of the planet in taking the decisions in the next year that will unite rich and poor, North, South, East and West, in a new global partnership to ensure our common future I ask you to work together to make it such for your time has come to make those changes.” - Maurice Strong in 2014
The 1992 Earth Summit, birthed Agenda 21 – a blueprint to take us through to the twenty-first century as well as securing the conventions on Climate Change and Biodiversity and the Rio Declaration. The Declaration, consisted of a set of 27 principles to guide countries included the principle of ‘the polluter pays,’ which recently was effective in holding British Petroleum (BP) accountable in the Deep Horizon disaster and serves as a foundational principle of the climate change Green Fund.  These agreements also had a backdrop, this being the First Gulf War and the increase again in oil prices as well as the stabilization of Eastern Europe after the breakup of the former Soviet bloc.

Promises to fund the implementation of the Summit agreements were estimated at $625 billion a year, which included a transfer of $125 billion from developed to developing countries, failed to emerge. In fact, aid flows declined in the 1990s, which I view as the ‘lost decade’ in retrospect. The 1990s was a time when the world could have truly laid the foundations for a more fair, equitable and sustainable world than we know today.

The 2012 Rio+20 conference, presented as a failure by much of the media, was in fact vital in setting up what would be the new Sustainable Development Goals (SDGs), finally agreed upon in September 2015. Without Rio+20, I am almost certain the agreement would have been closer to the Millennium Development Goals (MDGs) than what was agreed. The SDGs are different from the MDGs in a number of ways. First, they are universal and apply to all countries, while the MDGs applied to only developing countries. Second, they address the root causes of the problems we face as opposed to just addressing their symptoms. Third, they deal not just with sectors themselves, but also the interlinkages between sectors. For instance, you cannot effectively deal with water issues without recognizing that they are also relevant to issues involving food, energy, health, poverty, gender, biodiversity and climate. Finally, the MDGs address development, while the SDGs address sustainable development.

The SDGs, along with the Paris Agreement in December 2015, provide a very clear blueprint for sustainable development; but, as always, the real world has its own ideas on the implementation of these agreements.

The Brexit decision last year in the United Kingdom and the election of President Trump in the United States are already having an impact. There is no question that the implementation of policies on climate change have slowed in the United Kingdom, while almost stopping altogether in the United States. The difference between now and previous times is that in the area of energy the developments since the financial crisis of 2008 have advanced renewable energy investment. According to the HSBC review of ‘How Green were the Recovery Packages’ had seen large amounts of government funding going to green technology. Roughly 20% of the recovery package in the United States went to green technologies, with similar percentages in France and Germany. In China, this percentage was higher at 37%, and particularly high in South Korea at 79%. This investment means, in many places, renewable energy is now competitive with the fossil fuel industry and is exceeding the fossil fuel industry in job creation.

Around all of the SDGs, there has been an explosion of partnerships (nearly 3000) between governments, the UN, and stakeholders working together to create and deliver results on the ground. Many foundations have reorganized their funding around the SDGs. The SDG Funders Platform provides examples of this reorganization, and today national platforms of foundations exist in places such as Brazil, Ghana, Indonesia, the United States, and the Arab Region. Furthermore, the UN Global Compact, the Global Reporting Initiative, and the World Business Council for Sustainable Development have developed the SDG Compass to help companies reorganize and report on their implementation around the SDGs.

While the political climate in two key countries – the United Kingdom and the United States –may have shifted, there is a great deal of evidence to indicate that this shift will be a blip in the implementation of the 2015 SDGs and Paris Climate Agreement. Unlike previous global agreements, industry and the rest of society are integrating these commitments into their work. Leaders in the financial sector such as AVIVA are calling for requiring companies to produce environment, social and governance reports in addition to the traditional financial reports before being listed on the stock exchange. Why are they doing this? Because many of the SDGs are reflected in the top ten global risks in the World Economic Forum’s Annual Risk Report. They represent market failures, and the financial sector must be able to factor them into their investment decisions.

With all of this being said, obviously not everything is going well and there will certainly be countless challenges ahead. Nearly ten years since the financial crisis of 2008, many of the developed world’s economies are still experiencing sluggish growth. History has shown that there are financial crises of different varieties every ten years or so. The issue of banks being ‘too big to fail’ has gotten worse rather than better since 2008, and the Trump Administration in the United States may further exacerbate this issue by eliminating some of the regulations put in place through Dodd-Frank. The next financial crisis is just over the horizon, and I am worry about the resiliency of our political system and its ability to address it. How many of the people who caused the last crisis were ever prosecuted?

We are also in a period of massive change, with emerging technologies that will be greener and more accessible than ever before. Although, this will bring its own problems and governments will need to address them as they develop. The latest technologies, such as driverless cars, advancements in nanotechnology, 3-D printing, and more, will prove to be transformational for our society. So far, governments are not preparing their populations for the impact that these new technologies will have on employment and increasing inequality. These are real changes that, without preparation and government planning, will fuel people’s insecurity and their retreat from globalization as they assume their jobs will be more secure in a world built around higher walls…the higher the better.

In the same way that banks succeeded at privatizing the profits and socializing the losses as they led the global economy to the brink of collapse, my worry going forward is this: are we allowing the same to happen to the environment? Humanity has taken a huge leap over recent decades that has made us more interconnected than ever before – we need to behave as a global civilization as to not face catastrophic consequences.

The implementation of the SDGs and the Climate Agreement are the world’s best and perhaps last hope for creating a just, equitable and sustainable world.