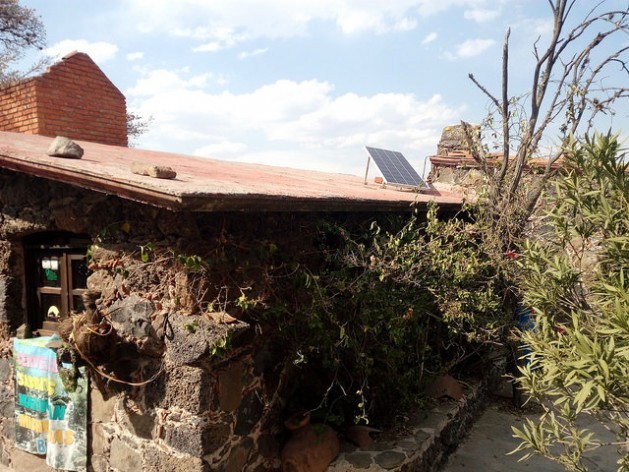 A house with a solar panel in the municipality of Tula, in Hidalgo, a state adjacent to Mexico City. Non-conventional renewable sources are considered an instrument to combat energy poverty. Credit: Emilio Godoy/IPS

MEXICO CITY, May 29 2017 (IPS) - Energy poverty afflicts millions of homes in Mexico, with many social, economic and environmental impacts for the country.

These homes, located in both urban and rural areas in this Latin American country of 122 million people, have difficulty satisfying their needs for energy for cooking, lighting, heating and entertainment.

“Not only is it a problem of access, since the population needs other consumables, to cook, take a bath, for family entertainment. Access to energy is a key indicator of well-being and in this respect it is important to know how many families lack this service,” expert Boris Graizbord told IPS.

“We have to regionalise the response, which requires a different combination of inputs and expenses. If we invest in solar water heaters or in other renewable energy sources, we’ll reduce spending on gas, we’ll decrease the power distribution. Those scenarios are possible if there is a decentralisation of power generation.“ -- Boris Graizbord

The academic from the Centre of Demographic, Urban and Environmental Studies at the public College of Mexico pointed out that some groups in small localities, even those who have their own incomes or remittances sent home by relatives in the United States, are unable to access natural gas or other energy sources.

The concept of energy poverty is new in Latin America, although it emerged in the 1990s in Britain, to describe the situation when a poor family spends more than10 percent of their income on energy.

But in countries such as Mexico the concept has been adapted to take into account cultural and social differences. Here the concept includes lack of access to energy, poor quality services, or energy inefficiency.

In a pioneering study, Graizbord and his colleague Roberto García, from the public College of the Northern Frontier, found that nearly 37 per cent of households –about 11 million homes– suffer from a shortage of energy in terms of “economic goods” such as thermal comfort, an efficient refrigerator or a gas or electric stove.

The study “Spatial characterisation of energy poverty in Mexico. An analysis at a subnational level,” published in 2016 in the magazine Economy, Society and Territory, found that the main factors behind the phenomenon are income level, the size of the town and of the house, and the educational level and gender of the head of the household.

This “represents a major social problem, due to the effect that the use of clean, affordable energy has on improving the quality of life and reducing poverty among the local population,” points out this study by Graizbord and García, who has worked on this issue in the Economic Commission for Latin America and the Caribbean (ECLAC).

The southern states of Chiapas, Guerrero and Oaxaca present the highest average levels of energy poverty, as well as the highest overall poverty rates.

In Mexico, 46 per cent of the population lived in poverty in 2014, when the latest National Survey of Household Incomes and Expenditures was carried out – a rate that has likely increased since then, according to experts.

The Energy Ministry identifies the most important end uses in the residential sector as water heating, cooking, refrigerator, lighting, air conditioning/heat and entertainment.

In 2015, firewood produced 252,840 petajoules. The joule is the measuring unit for energy which equals one watt per second and estimates how much heat is necessary to carry out an activity. A petajoule represents one quadrillion (10^15) joules.

Gabriela Niño, climate change coordinator for the non-governmental organisation Polea, said there is a close link between energy poverty and its social and environmental impacts, such as the emission of polluting gases, soil degradation and deforestation.

“With biomass there is a big health risk, since people are exposed to local pollutants by burning biomass indoors,” she told IPS.

Since August 2014, Mexico has embarked on a major energy reform that opened up oil exploration, extraction, refining, transportation, distribution and sale of oil and its by-products to local and foreign private investment.

But the question remains whether these changes will result in a reduction of energy poverty, insofar as the government leaves important activities of the electricity sector in private hands, who are profit driven, and not focused on social objectives.

This global initiative intends to guarantee universal access to modern energy services, double the rate of improvement of global energy efficiency and increase the share of renewable energy in the global energy mix.

Also, like the rest of the international community, it has adopted one of the 17 Sustainable Development Goals: SDG 7, which aims “to ensure access to affordable, reliable, sustainable and modern energy for all,” as part of the 2030 Agenda.

Graizbord proposes a response in Mexico differentiated by region, given the variations, including climatic, in different parts of the country.

“We have to regionalise the response, which requires a different combination of inputs and expenses. If we invest in solar water heaters or in other renewable energy sources, we’ll reduce spending on gas, we’ll decrease the power distribution. Those scenarios are possible if there is a decentralisation of power generation,” he said.

“We have to research, generate indicators, identify causes and possible solutions, on how energy is generated, how it is used,” she said.

In her opinion, “the democratisation of energy should also be promoted, the government should generate actions that respond to a public policy objective, focused on access to new technologies, such as solar panels, for people who are isolated from the grid or who are not able to produce their own power or meet their needs.”

In Latin America and the Caribbean, 97 per cent of the population has access to energy. This means that 23 million people still lack electricity, according to data from late 2016 of the Inter-American Development Bank (IDB). Nevertheless, the IDB predicts that this will be the first developing region to achieve universal energy access.

In Mexico, more than two million people have no electricity. According to the IDB, the countries in the region with the largest proportion of the population lacking energy access are Haiti – where only 40 percent have electricity – Honduras, Peru, and Mexico.

Meanwhile, leading the region in terms of greatest access are Uruguay, Costa Rica and Chile, in that order.