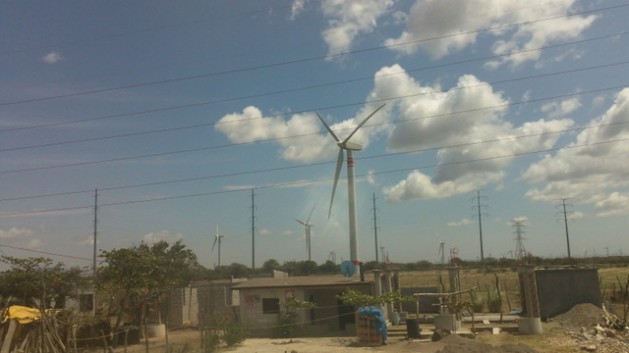 Communities in the southern Mexico state of Oaxaca complain that the wind parks being built in their territory violate their human rights. Credit: Courtesy of the Assembly of Indigenous Peoples of the Isthmus in Defence of Land and Territory

Three of the parks are being developed by Electricité de France (EDF) and the fourth is financed by public funds from Denmark and the Netherlands.

Benjamin Cokelet, founder and executive director of the Project on Organizing, Development, Education, and Research (PODER), said the wind farms have committed several violations of human rights, which should be examined by the OECD – made up of the nations of the industrialised North and two Latin American countries, Chile and Mexico.

“EDF’s three wind farm projects claim that the community consultations took place, but we have not seen any evidence that these permits were obtained,” the head of PODER, which is based in New York and Mexico City, told IPS.

With respect to the environment, it says businesses should “provide the public and workers with adequate, measurable and verifiable…and timely information on the potential environment, health and safety impacts of the activities of the enterprise”.

The Isthmus of Tehuantepec has the strongest potential for wind power in Mexico. Currently more than 1,900 MW are generated by 26 wind parks in the country, where Spanish companies have taken the lead.

Wind energy is projected to produce 15,000 MW by the start of the next decade.

It also says companies should “engage in adequate and timely communication and consultation with the communities directly affected by the environmental, health and safety policies of the enterprise and by their implementation.”

EDF, through its subsidiary EDF Energies Nouvelles (EDF EN), owns the Mata-La Ventosa wind farms. Another subsidiary is co-owner of the Bii Stinu park, while a third operates the Santo Domingo wind farm.

The three projects are in the Isthmus of Tehuantepec in the southern state of Oaxaca, which is the shortest distance between the Gulf of Mexico and the Pacific Ocean.

The other project that has been questioned is Mareña Renovables, with a generating capacity of 396 MW, in the Oaxaca coastal community of San Dionisio del Mar, on the Pacific Ocean.

This project is currently at a standstill because of legal action brought by members of the community whose land it is being built on.

According to PODER statistics, in the Isthmus of Tehuantepec, which is 200 km wide and has a surface area of 30,000 square kilometers, there are at least 20 wind park projects, controlled by 16 different companies.

The isthmus is also home to 1,230 agrarian communities, mainly indigenous “ejidos” or communal lands. Of the five indigenous people on the isthmus, the largest groups are the Zapotecs and Ikoots.

Reports from PODER indicate that conditions are favourable to business and negative for the local communities.

“The irregularities show collusion between public and private actors,” the organisation says.

The result is asymmetrical relationships and abusive leasing arrangements, characterised by the concealment of the permanent damage that the wind parks cause to farmland, the lack of fair compensation for damage, and extremely low rental payments for the land.

One problem was the lack of translators and interpreters for the local indigenous languages in the negotiations between the companies and the communities.

The right of local and indigenous communities to free, prior and informed consent is enshrined in the International Labour Organisation Convention 169 concerning Indigenous and Tribal Peoples and the United Nations Declaration on the Rights of Indigenous Peoples.

But this right has not been respected by the companies building the wind farms in the isthmus, PODER says.

Cokelet said the companies have thus failed to comply with international social and environmental standards.

In December 2013 the EDF EN joined the United Nations Global Compact, a set of 10 voluntary, non-binding principles in the areas of human rights, labour, the environment and anti-corruption for public or private signatories. In December this year, the EDF EN must present its report on compliance with these principles.

Construction of the Mareña Renovables wind farm complex was brought to a halt in 2013 by court rulings favourable to the affected communities.

The project consists of two wind parks that would produce a total of 396 MW, with an investment of 1.2 billion dollars. The project is partly owned by PGGM, the Netherlands’ largest pension management company.

The project also has nearly 75 million dollars in financing from the Inter-American Development Bank (IDB), and a 20 million dollar loan for the electricity purchaser from Denmark’s official Export Credit Agency (EKF).

In December 2012 the international Indian Law Resource Center filed a complaint on behalf of 225 inhabitants of seven indigenous communities with the IDB’s Independent Consultation and Investigation Mechanism (ICIM).

In September 2013, the IBD’s Panel of the Compliance Review Phase admitted the complaint. The panel is now preparing the investigation of the case, in order to draw up a report and proceed to oversee compliance with its provisions.

EDF’s Mata-La Ventosa also received a 189 million dollar loan from the International Finance Corporation (IFC), a member of the World Bank Group. In addition, the IFC channeled another 15 million dollars from the Clean Technology Fund (CTF).

Roberto Albisetti, IFC manager for Mexico and Central America, acknowledged to IPS the risk of complaints against the wind farms in Oaxaca, although he said the IFC’s independent grievance mechanism, the Compliance Advisor Ombudsman (CAO), had not received any up to now.

“The handling of the communities has been very serious,” he said. “We invested a lot of money in the consultation processes, because it is better to prevent than to face complaints later.”

In 2010, the IFC disbursed 375 million dollars for the construction of Eurus, another wind park in Oaxaca, which generates 250 MW.

Fomento Económico Mexicano (Femsa), Coca Cola’s bottler in Mexico, would be the biggest consumer of the electricity generated by the wind park. Femsa is the second-largest shareholder in the Dutch brewing company Heineken International.

Femsa also signed the U.N. Global Compact, in May 2005, and is to present its compliance report in March 2015. Heineken, meanwhile, joined in January 2006 and handed in its report in July.

Cokelet said Denmark’s EKF export credit agency, which also signed the Global Compact, could face legal action before the OECD for violating its principles to promote sustainable lending in the provision of official export credits to low-income countries.

Heineken and PGGM, which could also face complaints of violating OECD guidelines and principles, are in the same position, he added.