Why the G7 Must Fund Health & Nutrition 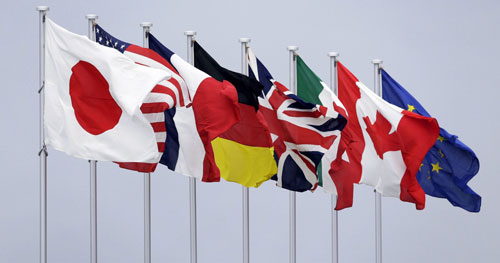 TAORMINA, Italy, May 25 2017 (IPS) - The G7 Summit, held annually among the leaders of the world’s most powerful economies (Canada, France, Germany, Italy, Japan, the United Kingdom, the United States, and the EU), plays an important role in shaping responses to global challenges—theoretically at least.

The format of the Summit continues to be modeled off the first one, held in 1975 when French President Valéry Giscard d’Estaing invited his counterparts to an informal meeting in Rambouillet to discuss the economic crisis triggered by the oil shock of 1973–1974. Leaders adopt a relaxed approach, discussing candidly the main issues on the international agenda.

Their aides (the so-called Sherpas) draft a joint declaration which is signed by the leaders and enshrined as high-level political pledges. Before and during, the Sherpas are lobbied fiercely by civil society trying to get their issues of concern in the joint communiqué released by the Summit.

This year’s Summit begins May 26 in Taormina, Italy. It is arguably one of the most charged and uncertain atmosphere for a meeting of traditional western democratic political leaders. The United States, which normally plays a leading role, is hamstrung by its government, led by Republican President Donald Trump, who, among his many challenges, is currently under investigation by his own law enforcement agencies to determine whether his campaign was complicit in Russian interference in the general election of 2016, which landed him a shock victory over former secretary of state Hillary Clinton, the Democratic nominee.

Outside of ethical and perhaps legal challenges, Trump, since his inauguration in January, has unleashed a set of policy proposals deliberately targeted at rolling back social justice gains under Barack Obama, his predecessor and even before. From proposed cuts to signature programs like the Affordable Care Act and food stamps for needy families, and hostile policies toward immigrants, the administration’s programs are causing deep uncertainty and anxiety at home and abroad. Trump’s lack of interest and understanding of the outside world, rounds off a list of flaws that justifies completely questions about his capacity or suitability to lead the free world toward any progressive end.

This year’s summit also comes with the shadow of Brexit—the United Kingdom’s decision to exit the European Union; a French President, the youngest in the country’s history and a mere three weeks in his presidency; looming elections in the UK and Germany; a continued migrant crisis as desperate people flee wars and famines in Africa and the Middle East, and this week’s horrific terrorist attack in Manchester, England. Volatility, uncertainty, complexity and ambiguity like we have not seen since the height of the Cold War, are the watchword of this G7 Summit.

So, when the leaders gather at their hilltop hideaway tomorrow, there is much that is new and worrying to be discussed and great energy will likely be consumed navigating these new and unpredictable dynamics. This does not augur well for those concerns that are so devastating but so old and entrenched, that they are not news anymore—no longer sexy enough grab the headlines, if they ever were. I speak here of diseases of poverty like tuberculosis and chronic starvation and malnutrition in parts of Africa.

In 2015, 10.4 million people were sickened with TB; 1.8 million of them died—more than HIV and malaria combined. Tuberculosis is the world’s only airborne drug-resistant epidemic and is responsible for one-third of the world’s antimicrobial resistance (AMR) deaths. By 2050, estimates show drug-resistant TB (DR-TB) will claim an additional 75 million lives at a global economic cost of US$16.7 trillion.

Since its establishment in 2002 by G7 countries, the Global Fund to Fight AIDS, Tuberculosis and Malaria (Global Fund) has saved more than 20 million lives through its support for AIDS, tuberculosis (TB), and malaria programs in countries and communities most in need. Vulnerable communities, including migrants and refugees, are at increased risk of diseases like TB and HIV/AIDS because of overcrowded living and working conditions, poor nutrition, and lack of access to care. The Sustainable Development Goals (SDGs), which all G7 countries signed on to, called for the eradication of HIV/AIDS, TB, and malaria by 2030.

To achieve this, G7 leaders must continue to invest in the Global Fund. Concerned civil society groups like ACTION global health partnership in Taormina advocating to the end, are hoping they will. Other major ask of G7 leadership include accelerated efforts to eradicate malnutrition and ensure proper nutrients for every child, particularly in the first 1000 days of life. Coupled with the inability to access proper healthcare by the world’s poorest people, malnutrition is one of the greatest barrier to human development and global prosperity

It is obvious that there are many complicated issues facing the G7 leaders, but, investing in health and nutrition should not be controversial—it should be fundamental.