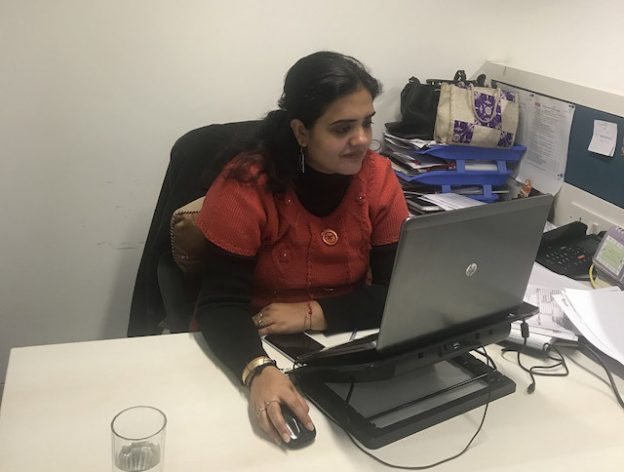 A woman at her desk in an IT office in New Delhi. During the last decade, 69 percent Indian women moved out of their place of residence after marriage - either to shift to their husband's place or to move elsewhere with them. Comparatively, only 2.3 percent of women relocated for work or employment and 1 percent for education. Credit: Neeta Lal/IPS

NEW DELHI, Jan 28 2018 (IPS) - Rekha Rajagopalan, a 26-year-old schoolteacher, migrated to the Indian capital city of New Delhi from southern Chennai in 2015 after her marriage. The reason was simple. Rekha’s husband and his family were based in Delhi, so like millions of other married Indian women, she left her maternal home to relocate to a new city with her new family.

But problems began soon after. Used to Chennai’s hot and balmy weather, Rekha hated Delhi’s severe cold in winter. The stress played on her mind; her periods became erratic. She also missed her younger sister and confidant Sumathi and her mother’s food.

Marriage migration is by far the largest form of migration in India and is close to universal for women in rural areas.

“It was a big cultural shock for me to shift to Delhi,” Rekha told IPS. “I love my husband, but it’s tough to cope with the pressure of living in a city so far away from my parental home. The cuisine, the language, the weather, everything seems so alien. It’s almost like living on a different planet.”

Nor is Rekha alone. As per the last census in 2011, over 217. 9 million Indian women had to migrate from their natal homes across the country due to marriage. These numbers reflect a significant surge from the year 2001 when 154 million of them shifted to a new city or town post marriage. In contrast, the corresponding numbers for men are staggeringly lower — 7.4 million and six million for those same years respectively.

Women’s migration across India is driven primarily by marriage, as pointed out by IndiaSpend, a public interest journalism website. In absolute numbers, a whopping 97 percent of Indians migrating for marriage were women in Census 2011, a marginal drop from 98.6 percent in Census 2001.

In fact surveys point out that women — whose place of residence is dictated by their marriage — form the single-largest category of migrants in the country. During the last decade, 69 percent Indian women moved out of their place of residence after marriage – either to shift to their husband’s place or to move elsewhere with them. Comparatively, only 2.3 percent women relocated for work or employment and 1 percent for education. Employment and education overall constituted 10 percent and 2 percent of migration movement respectively.

Unfortunately, despite the colossal number of women who have had to migrate because of marriage, the implications of female migration have not been sufficiently studied.

“The lack of attention to marriage migration means that very little is known about its extent, geographical distribution, how it has changed over time, and its relationship with age, distance, caste, household consumption, and geography,” says Scott L. Fulford in a 2015 research paper titled “Marriage migration in India: Vast, Varied, and Misunderstood”.

Fulford writes that marriage migration is by far the largest form of migration in India and is close to universal for women in rural areas. It also varies substantially across India, and little appears to have changed over the decades. But rather than an independent phenomenon, this type of migration is part of a “larger puzzle of low workforce participation, education, and bargaining power of women in India.”

“Although there are significant regional differences, most of India practices some form of patrilocal village exogamy in which women are married outside of their natal village, joining their husband’s family in his village or town. Across India three quarters of women older than 21 have left their place of birth, almost all on marriage,” writes the author.

Experts opine that apart from testing a woman’s capability to overcome daunting challenges in a new environment, marriage migration also triggers a sense of being uprooted and displaced from usual habituated places and established homes to new locations, which requires considerable reorientation and adjustment.

Demographer K. Laxmi Narayan from the University of Hyderabad, who has tracked the levels of rural-urban migration in India, says in the essay “India’s urban migration crisis” that the reason for marriage migration across India is mostly cultural and social. “In north India, women are not supposed to marry a man from the same village. So invariably marriage means migration,” he says.

However, as traditionally feared, marriage migration doesn’t necessarily result in women falling off the workforce map. Many of the women who migrate for marriage do join the labour force, says a January 2017 housing and urban poverty alleviation ministry report on migration. Migration for work usually results in relief from poverty even if it means a rough life in India’s cities, IndiaSpend reported on June 13, 2016. A migrant from Maharashtra’s drought-stricken Marathwada region, for example, triples her income temporarily after moving to Mumbai, according to the report.

Women’s gainful employment, however, doesn’t discount the fact that displacement extracts its own pound of flesh. According to Kavita Krishnan, social activist and secretary of the All India Progressive Women’s Association, the condition of women who migrate for marriage is analogous to migrant labourers.

“Such women feel vulnerable and socially isolated as they are not native to the place they shift to. They are often exploited by the husband and his family, not allowed to contact their natal families and their mobility is restricted. Domestic violence or abuse isn’t uncommon in this demographic either,” she says.

What emboldens the perpetrators of such abuse is the fact that the victim’s proximity to her family has been eliminated. Krishnan explains that the rampant cultural phenomenon of “bride purchase” — when women are bought from other regions to marry men in places where women are scarce (due to a skewed sex ration) — only makes the situation worse.

“These women are brought in from remote corners of the country and are mostly illiterate. With their near and dear ones living far away, their situation in an alien land is especially precarious.”

Ranjana Kumari, chairperson of the Centre for Social Research, a New Delhi-based think tank, believes  that an out-of-whack sex ratio in India exacerbates the problem of women’s marriage migration.

“In states like Haryana, which have one of the world’s worst sex ratios (914 girls to 1,000 boys), brides are forcibly brought in from other states, which leads to their cultural isolation and maladjustment. We’ve seen cases of illiterate women in Bundelkhand (Madhya Pradesh) being sold to men in other states for as little as 500 dollars,” she says. “This practice comes under the phenomenon of forced migration and is prevalent across many states.”

Such women, adds the activist, are also more likely to stay in abusive marriages as compared to those who live near natal homes and feel empowered to walk out due to emotional and monetary support extended by friends and natal families.

“If the women seek a divorce, which is rare, the prospect of courts taking several years to settle a case breaks them. Often these women cannot afford the several rounds of litigation involved and are dependent on others for sustenance. So she ends up compromising and living with her abusive families, especially if there are children involved.”

Where does the solution lie? Experts agree that due to lack of detailed studies on the subject, and not enough debates and discussions in public forums on it, no policies are in place to fix specific problems arising out of marriage migration.

“Normal divorce rules apply in such cases,” says Abha Rastogi, a senior High Court lawyer. “But often there are nuances involved which get overlooked due to lack of data and research on the subject. We need to address this lacuna promptly.”