This article is part of a series of stories on Disability inclusion. 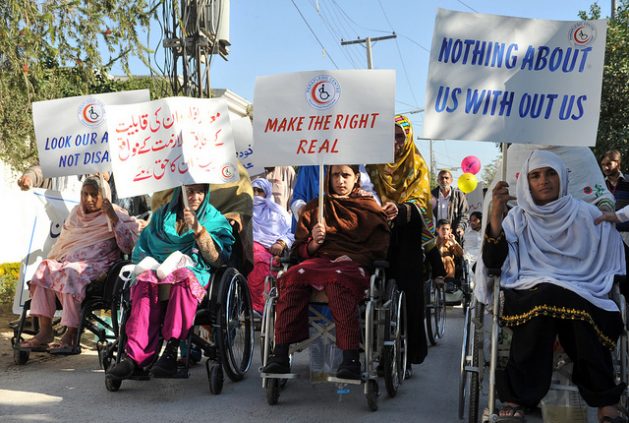 UNITED NATIONS, Aug 13 2018 (IPS) - Children with disabilities are up to four times more likely to experience violence, with girls being the most at risk, according to the United Nations Children’s Fund.

“Children with disabilities are among the most marginalised groups in society. If society continues to see the disability before it sees the child, the risk of exclusion and discrimination remains,” Georgina Thompson, a media consultant for UNICEF, told IPS.

According to the World Health Organisation, 15 percent of the global population lives with disabilities, making it the largest minority in the world—with children and women numbering higher among those disabled.

Last month, more than 700 representatives of non-governmental organisations, private companies and governments got together to address the systemic discrimination that exists against people with disabilities at the Global Disability Summit in London.

“Creating a more equal world where children with disabilities have access to the same opportunities as all children is everyone’s responsibility,” Thompson said.

More than 300 organisations and governments signed an action plan to implement the U.N. International Convention on Disability, which included 170 commitments from multiple stakeholders to ensure disability inclusion. The summit was organised by the governments of Kenya and the United Kingdom, along with the International Disability Alliance. The most important topics discussed during the meetings included passing laws to protect disabled citizens and promoting access to technology for people with disabilities.

Women and children face the most discrimination within the disabled community. A report presented to the U.N. Secretary-General on the situation of women and girls with disabilities stated that while 12 percent of men present a disability, a slightly higher amount of women—19 percent—have a disability.

In addition, girls are much less likely to finish primary school than boys, if both present disabilities. And girls are more vulnerable to sexual violence.

According to the U.K.’s Department for International Development, mortality for children with disabilities can be as high as 80 percent in states where child mortality has significantly decreased.

There is a strong consensus regarding the risk that both children and women face. “Women with disabilities are especially vulnerable to discrimination and violence (three to five times more likely to suffer from violence and abuse that the average [female] population),” André Félix, external communications officer at the European Disability Forum, told IPS.

When asked what to do to address this issue, A.H. Monjurul Jabir, co-lead of the U.N. Women’s Global Task Team on Disability and Inclusion, explained his viewpoint on establishing a targeted gender agenda: “The implementation of strategy requires a bottom-up approach by offices, colleagues, and partners on the ground.”

According to Jabir, U.N. Women’s strategy is “to support U.N. Women personnel and key stakeholders to facilitate the full inclusion and meaningful participation of women and girls with disabilities.”

“This would be done across all U.N. Women’s priority areas through our operational responses and internal accessibility to achieve gender equality and empowerment of all women and girls with disabilities,” he said.

Thompson suggested the following strategy for UNICEF: “We must increase investment in the development and production of assistive technologies. Assistive technologies, such as hearing aids, wheelchairs, prosthetics, and glasses, give children with disabilities the chance to see themselves as able from an early age.”

The aforementioned strategy was one of the goals of the Global Partnership for Assistive Technology, a collaboration launched during the summit to accomplish the sustainable development goals and offer technology to those who with disabilities. “And yet, in low-income countries, only five to 15 percent of those who need assistive technology can obtain it,” Thomson added.

And, as 80 percent of the population with disabilities live in developing countries, emergency situations and lack of education are also crucial issues to be addressed when launching policies for disability inclusion.

“We must make humanitarian response inclusive. In emergency situations, children with disabilities face a double disadvantage. They face the same dangers as all children in conflicts or natural disasters do, including threats to their health and safety, malnutrition, displacement, loss of education and risk of abuse.

“But they also face unique challenges, including lack of mobility because of damaged infrastructure, difficulty fleeing harm and the prejudices that keep them from accessing the urgent assistance they need,” Thompson said.

According to the U.N. Educational, Scientific and Cultural Organisation, 90 percent of children who live in developing countries that have educational opportunities available do not attend school.

“We must make education inclusive. Around half of all children with disabilities do not go to school because of prejudice, stigma or lack of accessible learning. Of those who do go to school, about half do not receive quality education because of a lack of trained teachers, accessible facilities, or specialised learning tools,” Thompson urged. “Excluding children with disabilities from education can cost a country up to five percent of its GDP due to lost potential income.”

But, who is responsible?

As was seen during the summit, member states are not the only stakeholders taking responsibility for disability inclusion. U.N. agencies, NGOs, and private firms are constantly launching programmes to reduce the gap and erase discrimination.

However, Félix explained what each stakeholder would be responsible for: “Member States are the policymakers. They need to guarantee that all the population is included and benefits from international development and inclusive policies. They also need to make sure that they consult civil society in the process.”

As for civil society, he said: “Civil society’s role is to monitor and advise the project and while they need to be included and part of international development (especially local civil society), the resources should come from member states.”

Thompson added that those actors must work so closely that it would be hard to separate roles.

Agreeing with her, Jabir concluded: “It is the responsibility of everyone, all actors and stakeholders, we must work together, cohesively, not separately. The days of only standalone approach, or silo mentality is over.”