WASHINGTON DC, Aug 1 2018 (IPS) - Rhetoric escalated between the United States and Iran when U.S. President Donald Trump irresponsibly tweeted July 22 that Iranian President Hassan Rouhani must “NEVER EVER THREATEN THE UNITED STATES AGAIN” or else suffer consequences the likes of which “FEW HAVE EVER SUFFERED BEFORE.” 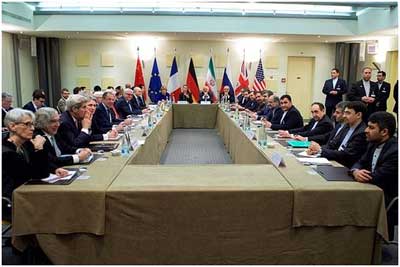 The meeting for a Comprehensive agreement on the Iranian nuclear program in 2015. Attendees included John Kerry of the United States, Philip Hammond of the United Kingdom, Sergey Lavrov of Russia, Frank-Walter Steinmeier of Germany, Laurent Fabius of France, Wang Yi of China, Federica Mogherini of the European Union and Javad Zarif of Iran.

In response to Trump’s threat, Iranian Foreign Minister Javad Zarif tweeted July 23 that Iran is “UNIMPRESSED” by the bluster and ended his message with the warning “BE CAUTIOUS.”

The Trump tweet was likely prompted by Rouhani warning July 22 that the United States should know that “war with Iran is the mother of all wars” and if Iran’s oil exports are blocked, “no other country in the region” will export oil.

The sanctions that Trump reimposed May 8 when he violated and withdrew from the multilateral nuclear deal with Iran, known as the Joint Comprehensive Plan of Action (JCPOA), include measures penalizing states if they fail to significantly reduce imports of Iranian oil every 180 days.

Secretary of State Mike Pompeo reiterated in a July 22 speech that the U.S. focus is to get states importing Iranian oil to “as close to zero as possible” by the Nov. 4 180-day deadline (see below for details).

Pompeo said little about the JCPOA in his speech, which criticized the Iranian regime and reiterated that the United States is engaged in a “diplomatic and financial pressure campaign” to cut off funds used by the government to “enrich itself and support death and destruction.”

While Trump’s tweet prompted pushback from some policymakers, U.S. National Security Advisor John Bolton July 23 reiterated and appeared to broaden the vague and reckless threat, saying “if Iran does anything at all to the negative, they will pay a price like few countries have ever paid before.”

Secretary of Defense James Mattis said July 24 that Trump is making “very clear” that Iran is “on the wrong track” and called for Tehran to “shape up and show responsibility.”

The exchange of threats between the United States and Iran is taking place as the P4+1 (China, France, Germany, Russia, and the United Kingdom) are looking for options to sustain sanctions relief and keep Iran in the JCPOA (see below for details).

The P4+1 face a ticking clock, as the first U.S. sanctions re-imposed by Trump will be enforceable Aug. 6, when the 90-day wind down closes. These measures target certain banking activities, trade involving certain metals, coal, and the automotive sector, and the purchase of U.S. dollars by the Iranian government.

The Treasury Department will also revoke authorizations allowing carpets and Iranian foodstuffs to be exported to the United States and revoke licenses issued for the sale of commercial aircraft parts and services to Iran.

The remaining sanctions penalties, including those that target Iran’s oil sales, will be effective Nov. 4.