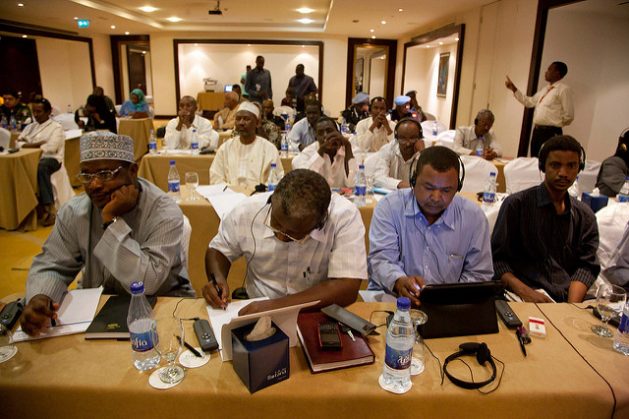 KHARTOUM, Nov 2 2018 (IPS) - The day before Amnesty International released a statement calling on the government of Sudan to end harassment, intimidation and censorship of journalists following the arrests of at least 15 journalists since the beginning of the year, the head of the National Intelligence Security Services (NISS) Salah Goush accused Sudanese journalists, who recently met with western diplomats, of being spies.

Goush made the statement before parliament where he signed the code of conduct for journalists.

“They were called and interrogated to let them know that this [meeting with Western diplomats] is a project of spying,” said Goush to Sudan’s parliamentarians on Thursday Nov. 1. He then announced that the NISS was dropping all complaints against the journalists.

But Amnesty International said in its statement issued today, Nov. 2, that “the Sudanese government have this year been unrelenting in their quest to silence independent media by arresting and harassing journalists and censoring both print and broadcast media.”

“This just shows that Sudanese officials have not changed their ways- they still accuse journalists and activists of being spies and other trumped up accusations,” Jehanne Henry, a researcher on Sudan and South Sudan at Human Rights Watch, told IPS about Goush’s comments to parliament.

On Tuesday, a Reuters stringer in Khartoum and two other local journalists were questioned by the state security prosecutor about their earlier meetings with European Union diplomats and the United States’ ambassador to Sudan.

At the time they were told that they might face charges when the investigation is completed. Prior to Tuesday, five other journalists were also interrogated for meeting the same diplomats and the NISS stated that two more journalists were to be questioned on the same matter.

“What the NISS is doing to us is a form of extortion and it’s a terror act to stop freedom of the press. Journalists have the right to meet diplomats, government officials and opposition and anyone else and they can talk to about freedom of speech or anything else. Journalists are not spies,” Bahram Abdolmonim, one of the three journalists interrogated by the NISS on Tuesday, told IPS. He added “journalism is a message”.

Prior to Abdolmonim’s questioning three female and two male journalists were summoned to the NISS prosecutor’s office and where questioned for meeting with western diplomats and discussing freedom of speech.

These are not the only incidents of clampdown against journalists. On Oct. 16 five journalists were arrested in front of the Sudanese parliament for protesting against the barring of one of their colleagues from parliament.

“Since the beginning of 2018 the government of Sudan, through its security machinery, has been unrelenting in its crackdown on press freedom by attacking journalists and media organisations,” said Sarah Jackson, Amnesty international Deputy Director for East Africa, the Horn and the Great Lakes.

Amnesty International also said that there was an increase in print censorship and that editors receive daily calls from NISS agents to question them about their editorial content. The editors have to then justify their storylines. NISS agents also show up at printing presses and either order editors to drop certain stories or confiscate entire print runs.

“Between May and October, the Al Jareeda newspaper was confiscated at least 13 times, Al Tayar was confiscated five times and Al Sayha four times. A host of other newspapers including Masadir, Al Ray Al Aam, Akhirlahza, Akhbar Al Watan, Al Midan, Al Garar and Al Mustuglia were each confiscated once or twice,” the statement said.

Broadcast media have also been subjected to censorship. Earlier last month, NISS suspended a talk show on Sudania24 TV after it hosted Mohamed Hamdan, the leader of the Rapid Support Forces, formerly the Janjaweed troops, who are accused of committing atrocities in Darfur.

Across the country reporting is tightly restricted. Conflict zones like Darfur, Blue Nile and South Kordofan states, are especially difficult to report from.

“The Sudanese authorities must stop this shameful assault on freedom of expression and let journalists do their jobs in peace. Journalism is not a crime,” said Jackson.

Media watchdog Reporters Without Borders (RSF) ranked Sudan 174th out of 180 countries on its 2018 World Press Freedom Index, charging that the NISS “hounds journalists and censors the print media.”

Journalists in Sudan are often arrested and taken to court where they face complaints that range from lying to defamation.

Amnesty International called on the Sudanese government to revise the Press and Printed Materials Act of 2009.

“We work in fear in here, when I write something I’m not sure if I will end up going to jail or be interrogated by the NISS,” one journalist who preferred to remain anonymous for fear of their safety told IPS.