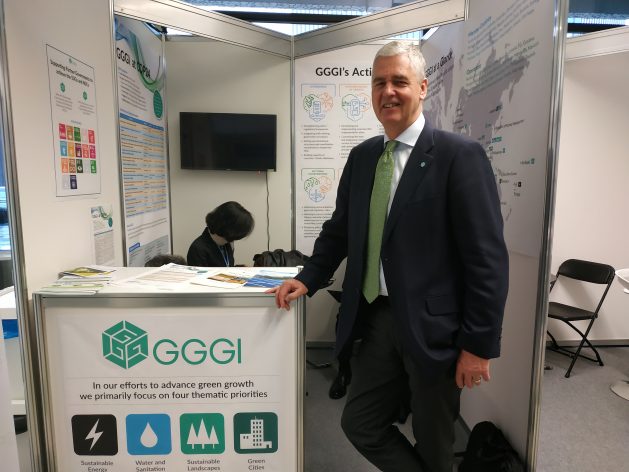 KATOWICE, Poland, Dec 13 2018 (IPS) - When the Global Green Growth Institute’s (GGGI) Director General Frank Rijsberman’s son was looking for a job following graduation, he saw that oil companies were paying the highest salaries. But Rijsberman, who has been working in the sustainable development sector for decades, knew better. He told his son that those very same oil companies would soon go broke. And instead advised him to seek employment with renewable energy companies as they would soon be the ones making money.

As head of GGGI, it is undoubtable that Rijsberman has expert insight into the future of the renewable energy sector. GGGI supports governments around the world transition to environmentally sustainable and socially inclusive economic growth by helping them mobilise finance for climate action and implement their Nationally Determined Contributions (NDCs) i.e. country commitments for reducing greenhouse gas emissions and adapting to climate change.

With a career spanning over 30 years, Rijsberman is one of the strongest advocates of green growth attending the 24th Conference of the Parties to the United Nations Framework Convention on Climate Change (COP24) in Katowice, Poland. His organisation is organising over 15 events at the conference that are focused on, among other things, how low carbon development, green finance, transparency and capacity development of countries can address climate change.

Amidst his packed COP24 schedule, Rijsberman sat down with IPS for a brief interview on the state of global climate action, COP24 and the work of GGGI in attaining green growth.

Inter Press Service (IPS): Climate finance has been one of the sticking points at COP24 so far. Developing countries are concerned that the developed world is shifting the role of financial contributions to the private sector. What are your thoughts on this?

Dr. Frank Rijsberman (FR): Firstly, there needs to be a clean definition of the 100 billion dollars climate finance pledged to the Green Climate Fund (GCF). This 100 billion shouldn’t be diluted. We need this 100 billion to be clean and green. But at the same time, this is only a small part of what we need to fight climate change. We need trillions, and for that public finance is not enough. This will only come about if we get the institutional investors off the sideline and get the pension funds, the private sector to engage.

IPS: What are some of the challenges that now exist with regards to engaging the private sector in funding green growth and how can they be engaged more effectively?

FR: It starts with many of the governments not even realising that renewable energy has become commercially viable. They still think green growth is nice but it is expensive and [they] can’t afford it. It is already commercially viable to use solar-based batteries for instance, so there is a business case there. So convincing people that these are commercially attractive investments is the first thing that needs to be done. If structured well enough, [as in the case of] Bangladesh offering 20-year power purchase agreement at a reasonable price, then we can attract private investors.

Governments also must create an enabling environment for the private sector to engage and have a level playing field for renewables to attract those investments. If there are barriers, such as fossil fuel subsidies, it becomes very hard for private businesses to make a living out of renewables. In Fiji, for instance, the government subsidises dirty electricity for poor households. Stopping that subsidy and turning it into a subsidy for solar power on the roofs of low income houses is one of our projects.

IPS: Two months ago, the IPCC released a report that confirmed that accepting increased global warming of 2 degrees Celsius will impact severely lives, livelihoods and natural ecosystems. This means drastic changes are needed to limit global warming to 1.5 degrees Celsius. Is it achievable here?

FR: It has to be finance first. Then we need to agree on transparency. We also need to ramp up ambition and rather than to waver from their NDCs countries need to step up their commitments, but that is for next year. We need to agree on the rulebook and get over the hurdle of finance at this COP then everybody’s attention will focus on more ambition, which is what we need. If we get stuck on the Paris rulebook or finance then we also don’t get to the 1.5 degrees, so it is like a house of cards.

IPS: Transparency is one of the key issues being debated at COP24. What are your thoughts on it?

FR: Transparency is the code word for Article 6. Part of it means developed countries reporting in a credible way. And for developing countries it also means to save their rainforests, to restore their mangrove areas – can they get money to pay for that? There are countries like Korea or Australia that can’t reduce their emissions fast enough, but they are willing to buy carbon credits. But then we need to agree on a rulebook for transparency – how are we going to report, what kind of Monitoring Reporting and Verification Systems (MRVS) are necessary, and those MRVS shouldn’t overly burden countries like Myanmar.

We can’t have the same kind of rulebook for Myanmar and Germany [and] shouldn’t make the barriers to access very high. Small Island Developing States (SIDS) felt they were excluded because [these processes] were too complicated. So, this time around transparency needs to allow the Least Developed Countries and SIDS to really access that. That is the critical sticking point.

IPS: Your organisation assists member states, which include developing nations, access funding from the GCF. It has also assisted member countries in developing green growth models to great success. Are you seeing an increased commitment from governments, in both developing and developed nations, to embrace green growth? What is your vision for GGGI going ahead from COP24?

FR: We are very proud that we supported Fiji in developing one of the first low emission development scenarios, which they are presenting here at COP. Last year we worked with Fiji to have their NDC roadmap. This is just an example of the kind of things we do. We also work with many developing countries in getting more concrete action plan for NDCs. We are growing very rapidly.

We only started six years ago with 12 countries and now 30 countries have ratified our treaty and another 30 are in the queue to become members. When our President Ban Ki-moon meets ministers he encourages them to take green growth more seriously, then those ministers contact us about how they can do so.

We also see a lot of good opportunities from the SIDS.

In South East Asia – Vietnam, Indonesia – there is a large portfolio of planned new coal fired power plants. So, these are the hotspots and we need to convince those governments that green growth is commercially attractive and feasible. We are very happy with Indonesia’s commitment for green growth and we are strongly supporting Vietnam’s government to convert their intent to climate action.

Now the Finance Ministers who want growth are interested in green growth, integrating these ideas into mainstream national development planning. For instance, we helped Uganda develop the green growth development strategy which the ministry of finance is leading. That is what I am most excited about. We have finally convinced ministries of finance to take green growth seriously.