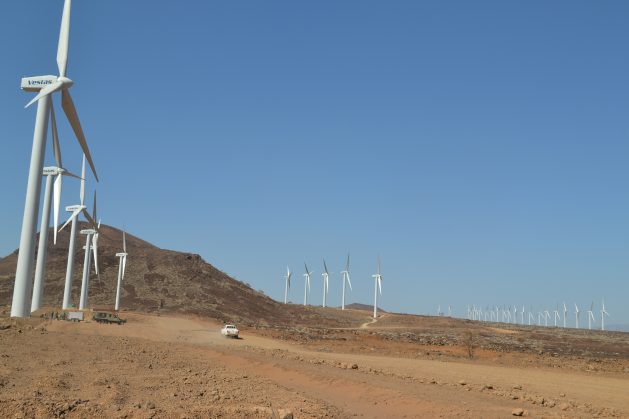 A wind energy generation plant located in Loiyangalani in northwestern Kenya. The plant is set to be the biggest in Africa, generating 300 MW. Credit: Isaiah Esipisu/IPS

KATOWICE, Poland, Dec 11 2018 (IPS) - In order for African countries to implement their Nationally Determined Contributions (NDC) and Sustainable Development Goals (SDG), they will require further human capacity building, and there must be involvement of the private sector from the start of the planning process.

This is according to preliminary findings of a study on green growth trends and readiness across the continent jointly conducted by the Global Green Growth Institute (GGGI) in collaboration with the African Development Bank (AfDB).

The NDCs spell out the actions countries intend to take to address climate change, both in terms of adaptation and mitigation, and the SDGs are a universal call to action to end poverty, protect the planet and ensure that all people enjoy peace and prosperity.

The early findings of the report titled Green Growth Readiness Assessment in Africa was released on the sidelines of the 24th Conference of the Parties to the United Nations Framework Convention on Climate Change (COP24) in Katowice, Poland yesterday Dec. 10. Seven countries; Morocco, Tunisia Senegal Gabon, Rwanda Kenya and Mozambique, were selected for the pilot phase.

The scientists presented the findings as climate talks in Katowice entered the second week of negotiations, a stage where political leaders decide whether or not to adapt recommendations brought forth following the first week of technical engagements.

The report stated that high-level political commitment, appropriate policies and implementation of government strategic plans are the key drivers of green growth among African countries.

“Governments need to look at this [NDCs and SDGs] as commercial business opportunities,” said Dr. Frank Rijsberman, the Director General for GGGI. Surprisingly, he said, “I have asked a number of private investors as to why they do not invest in this sector, and the answer is not lack of finances, instead they say it is because of government policies.”

The need for sound policies was reiterated by Anthony Nyong, Director for Climate Change and Green Growth at the AfDB, who said that there must be an enabling environment for countries to achieve the much-desired green growth.

“After this assessment report, findings will be shared across the board so that countries can learn from each other,” said Nyong.

According to Dr. Pranab Baruah, one of the lead researchers from GGGI, some of the seven countries in the study have demonstrated high level leadership commitment that confirms their willingness to implement a green growth model.

Kenya is currently producing the highest amount of geothermal energy in Africa with an output of 534 megawatts (MW), and 84 percent of all electricity installations consist of green energy.

The country is also in the process of constructing the largest wind firm in Africa with a potential capacity of 300 MW.

This is despite the government’s unpopular plan to construct the largest coal plant in sub-Saharan Africa. However, yesterday Kenya’s Environment Cabinet Secretary Keriako Tobiko told IPS  that the government is likely going to reconsider whether to proceed with construction of the coal plant.

But above all, said Baruah, the study found that Kenya’s recent introduction of a green growth curriculum in schools was key to the development of human capacity.

Rwanda is another country whose green growth is spearheaded from the highest political level. While most countries around the world wait for finances for mitigation projects to come from the Green Climate Fund, Rwanda is already mobilising and disbursing funds nationally.

The researchers said that Rwanda has created a 100-million-dollar National Fund for Climate and the Environment (FONERWA) as an instrument for financing the country’s needs on environment, climate change, and green growth.

In the same vein, Senegal is in the process of removing financial barriers for private sector participation through pilot projects. The country has a 200-million-dollar Renewable Energy and Energy Efficiency Fund (REEF), which provides financial incentives to private sector led pilot projects, such as lengthening the refinancing period for the small businesses.

The study also found that countries require urgent financing readiness, especially with the emergence of Green Climate Fund and that there is an urgent need for the strengthening of policy and planning frameworks for green growth. Countries studied also needed to address weak monitoring and reporting systems and work to enhance wider stakeholder buy-in to the green growth agenda.