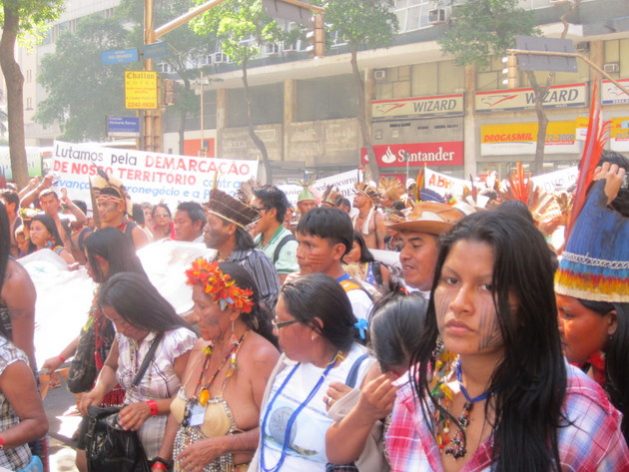 "We are fighting for the demarcation of our territory," reads a banner in a march of indigenous women who came to Rio de Janeiro from the communities of the 305 native peoples of Brazil, to demand respect for the rights recognised by the constitution, which far-right President Jair Bolsonaro began to ignore as soon as he was sworn in. Credit: Mario Osava/IPS

RIO DE JANEIRO, Jan 10 2019 (IPS) - “We have already been decimated and subjected, and we have been victims of the integrationist policy of governments and the national state,” said indigenous leaders, as they rejected the new Brazilian government’s proposals and measures focusing on indigenous peoples.

In an open letter to President Jair Bolsonaro, leaders of the Aruak, Baniwa and Apurinã peoples, who live in the watersheds of the Negro and Purus rivers in Brazil’s northwestern Amazon jungle region, protested against the decree that now puts indigenous lands under the Ministry of Agriculture, which manages interests that run counter to those of native peoples.

Indigenous people are likely to present the strongest resistance to the offensive of Brazil’s new far-right government, which took office on Jan. 1 and whose first measures roll back progress made over the past three decades in favor of the 305 indigenous peoples registered in this country.

Native peoples are protected by article 231 of the Brazilian constitution, in force since 1988, which guarantees them “original rights over the lands they traditionally occupy,” in addition to recognising their “social organisation, customs, languages, beliefs and traditions.”

To this are added international regulations ratified by the country, such as Convention 169 on Indigenous and Tribal Peoples of the International Labor Organisation, which defends indigenous rights, such as the right to prior, free and informed consultation in relation to mining or other projects that affect their communities.

It was indigenous people who mounted the stiffest resistance to the construction of hydroelectric dams on large rivers in the Amazon rainforest, especially Belo Monte, built on the Xingu River between 2011 and 2016 and whose turbines are expected to be completed this year.

Transferring the responsibility of identifying and demarcating indigenous reservations from the National Indigenous Foundation (Funai) to the Ministry of Agriculture will hinder the demarcation of new areas and endanger existing ones.

There will be a review of the demarcations of Indigenous Lands carried out over the past 10 years, announced Luiz Nabhan García, the ministry’s new secretary of land affairs, who is now responsible for the issue.

García is the leader of the Democratic Ruralist Union, a collective of landowners, especially cattle ranchers, involved in frequent and violent conflicts over land.

Bolsonaro himself has already announced the intention to review Raposa Serra do Sol, an Indigenous Land legalised in 2005, amid legal battles brought to an end by a 2009 Supreme Court ruling, which recognised the validity of the demarcation. 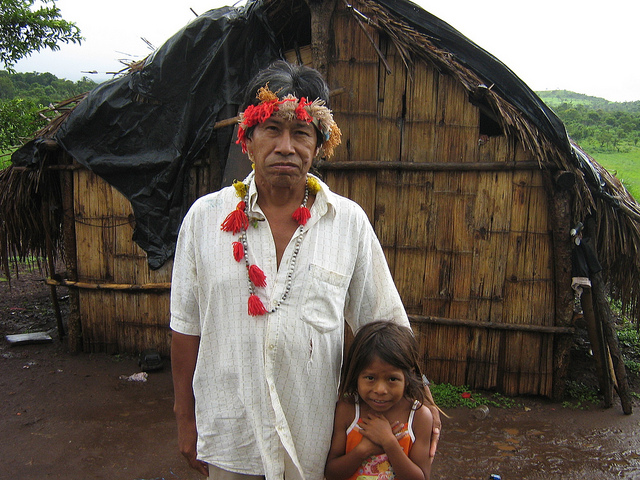 Hamilton Lopes and his daughter, members of the Guarani indigenous community, stand in front of their hut, where their family lives a precarious existence on land that has not been demarcated, where they face threats of expulsion, on Brazil’s border with Paraguay. Large landowners seize the lands of the Guarani, the second-largest native community in the country, causing a large number of murders and suicides of indigenous people. Credit: Mario Osava/IPS

This indigenous territory covers 17,474 square kilometers and is home to some 20,000 members of five different native groups in the northern state of Roraima, on the border with Guyana and Venezuela.

In Brazil there are currently 486 Indigenous Lands whose demarcation process is complete, and 235 awaiting demarcation, including 118 in the identification phase, 43 already identified and 74 “declared”.

“The political leaders talk, but revising the Indigenous Lands would require a constitutional amendment or proof that there has been fraud or wrongdoing in the identification and demarcation process, which is not apparently frequent,” said Adriana Ramos, director of the Socio-environmental Institute, a highly respected non-governmental organisation involved in indigenous and environmental issues.

“The first decisions taken by the government have already brought setbacks, with the weakening of the indigenous affairs office and its responsibilities. The Ministry of Health also announced changes in the policy toward the indigenous population, without presenting proposals, threatening to worsen an already bad situation,” she told IPS from Brasilia.

“The process of land demarcation, which was already very slow in previous governments, is going to be even slower now,” and the worst thing is that the declarations against rights “operate as a trigger for violations that aggravate conflicts, generating insecurity among indigenous peoples,” warned Ramos.

In the first few days of the new year, and of the Bolsonaro administration, loggers already invaded the Indigenous Land of the Arara people, near Belo Monte, posing a risk of armed clashes, she said.

The indigenous Guaraní people, the second largest indigenous group in the country, after the Tikuna, who live in the north, are the most vulnerable to the situation, especially their communities in the central-eastern state of Mato Grosso do Sul.

They are fighting for the demarcation of several lands and the expansion of too-small areas that are already demarcated, and dozens of their leaders have been murdered in that struggle, while they endure increasingly precarious living conditions that threaten their very survival. 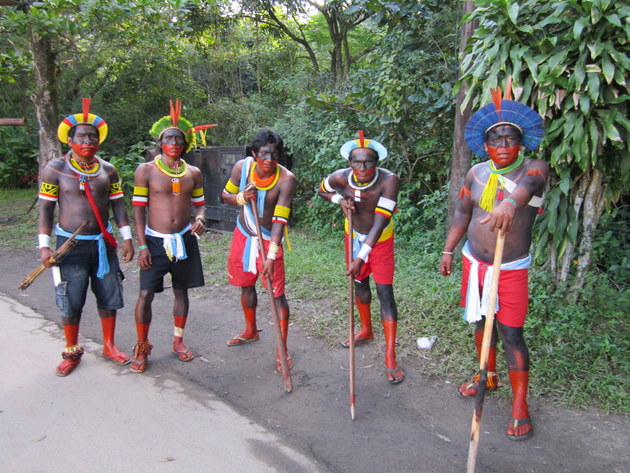 Karioca Cupobo Indians are painted and armed for combat before participating in a demonstration for indigenous rights in Rio de Janeiro, Brazil. Credit: Mario Osava/IPS

“The grave situation is getting worse under the new government. They are strangling us by dividing Funai and handing the demarcation process to the Ministry of Agriculture, led by ruralists – the number one enemies of indigenous people,” said Inaye Gomes Lopes, a young indigenous teacher who lives in the village of Ñanderu Marangatu in Mato Grosso do Sul, near the Paraguayan border.

Funai has kept its welfare and rights defence functions but is now subordinate to the new Ministry of Women, Family and Human Rights, led by Damares Alves, a controversial lawyer and evangelical pastor.

“We only have eight Indigenous Lands demarcated in the state and one was annulled (in December). What we have is due to the many people who have died, whose murderers have never been put in prison,” said Lopes, who teaches at a school that pays tribute in indigenous language to Marçal de Souza, a Guarani leader murdered in 1982.

“We look for ways to resist and we look for ‘supporters’, at an international level as well. I’m worried, I don’t sleep at night,” she told IPS in a dialogue from her village, referring to the new government, whose expressions regarding indigenous people she called “an injustice to us.”

Bolsonaro advocates “integration” of indigenous people, referring to assimilation into the mainstream “white” society – an outdated idea of the white elites.

He complained that indigenous people continue to live “like in zoos,” occupying “15 percent of the national territory,” when, according to his data, they number less than a million people in a country of 209 million inhabitants.

“It’s not us who have a large part of Brazil’s territory, but the big landowners, the ruralists, agribusiness and others who own more than 60 percent of the national territory,” countered the public letter from the the Aruak, Baniwa and Apurinã peoples.

Actually, Indigenous Lands make up 13 percent of Brazilian territory, and 90 percent are located in the Amazon rainforest, the signatories of the open letter said.

“We are not manipulated by NGOs,” they replied to another accusation which they said arose from the president’s “prejudices.”

A worry shared by some military leaders, like the minister of the Institutional Security Cabinet, retired General Augusto Heleno Pereira, is that the inhabitants of Indigenous Lands under the influence of NGOs will declare the independence of their territories, to separate from Brazil.

They are mainly worried about border areas and, especially, those occupied by people living on both sides of the border, such as the Yanomami, who live in Brazil and Venezuela.

But in Ramos’ view, it is not the members of the military forming part of the Bolsonaro government, like the generals occupying five ministries, the vice presidency, and other important posts, who pose the greatest threat to indigenous rights.

Many military officers have indigenous people among their troops and recognise that they share in the task of defending the borders, she argued.

It is the ruralists, who want to get their hands on indigenous lands, and the leaders of evangelical churches, with their aggressive preaching, who represent the most violent threats, she said.

The new government spells trouble for other sectors as well, such as the quilombolas (Afro-descendant communities), landless rural workers and NGOs.

Bolsonaro announced that his administration would not give “a centimeter of land” to either indigenous communities or quilombolas, and said it would those who invade estates or other properties as “terrorists.”

And the government has threatened to “supervise and monitor” NGOs. But “the laws are clear about their rights to organise,” as well as about the autonomy of those who do not receive financial support from the state, Ramos said.