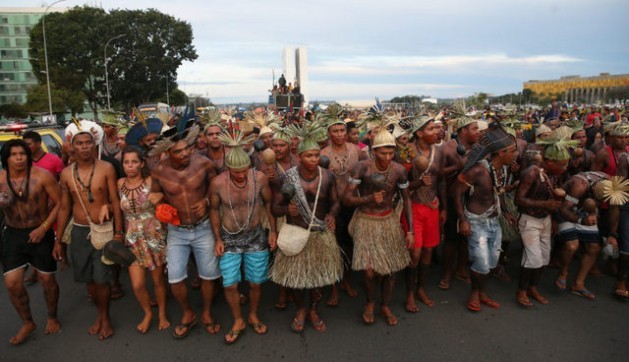 Representatives of indigenous peoples in Brazil, who gather every year in April at the Free Land Camp on the Esplanade of the Ministries in Brasilia, in a protest against the legislators who undermine their rights to land, health and education. The National Congress is seen in the background. Credit: José Cruz/Agência Brasil

RIO DE JANEIRO, May 31 2017 (IPS) - The attack with guns and machetes that left at least 10 Gamela indigenous people wounded, in the northeastern state of Maranhão, highlighted the growing threats against the resurgence and survival of native people in Brazil.

On Apr. 30, dozens of armed men attacked indigenous people who were occupying an estate in the municipality of Viana, which they claim as their ancestral land. Two of the injured suffered deep cuts on their hands.
The uneven battle was reminiscent of the massacres that decimated Brazil’s native population over the course of five centuries. But it was merely the most brutal part of an offensive unleashed on multiple fronts by large landowners, who consider the amount of land granted to indigenous people excessive.

“This is the worst moment in terms of government indigenous policy since the (1964-1985) military dictatorship,” said Marcio Santilli, a founding member of the non-governmental Social-Environmental Institute (ISA) and former president (1995-1996) of the National Indigenous Foundation (FUNAI), the government indigenous rights agency.
The government of President Michel Temer, in office since May 2016, is behind “an unprecedented setback in the entire system of protection of the environment, native peoples and farm workers,” the ISA and 59 other non-governmental organisations complained in an “open letter” released on May 9.

The offensive has included a 55 per cent cut in FUNAI’s budget this year, the appointment of an army general, Franklimberg de Freitas, as head of the agency, and legislative measures that seek to revoke the indigenous right to the lands where they have traditionally lived, recognised in Brazil’s constitution.

A constitutional amendment, under discussion since 2000, aims to transfer from the executive to the legislative branches the authority to make the final decision regarding the demarcation of indigenous lands.

Approval of the amendment would block the process of demarcation of native land promoted by the 1988 constitution, since Congress is traditionally conservative and is currently dominated by the Agricultural Parliamentary Front (APF), vehemently opposed to assigning more land to indigenous people.

The multi-party block, also known as the rural caucus, is comprised of 257 lawmakers – half of the lower chamber – and 16 senators – one-fifth of the Senate – according to the Inter-union Department of Parliamentary Advisory.

“President Temer, who is very unpopular, is hostage to the Congress and vulnerable to the pressures of the parliamentarians,” Santilli told IPS, to explain his concern with respect to the initiatives set forth by the current administration, whose term ends the first day of 2019.

Justice Minister Osmar Serraglio was legal coordinator of the APF until February, when he was appointed to head the ministry that is currently responsible for indigenous policy, as FUNAI answers to the Justice Ministry.
The president of the APF, lawmaker Nilson Leitão, as rapporteur for the Parliamentary Commission of Inquiry on FUNAI and Land Reform, is calling for the prosecution of dozens of leaders of non-government organisations (NGO), anthropologists, public prosecutors and government officials for alleged fraud in the demarcation of indigenous lands.

“It is a paradox that he intends to criminalise those who want to comply with the constitution” by ensuring indigenous access to lands that were traditionally theirs, Santilli remarked.

“We are all defending the constitution, from different 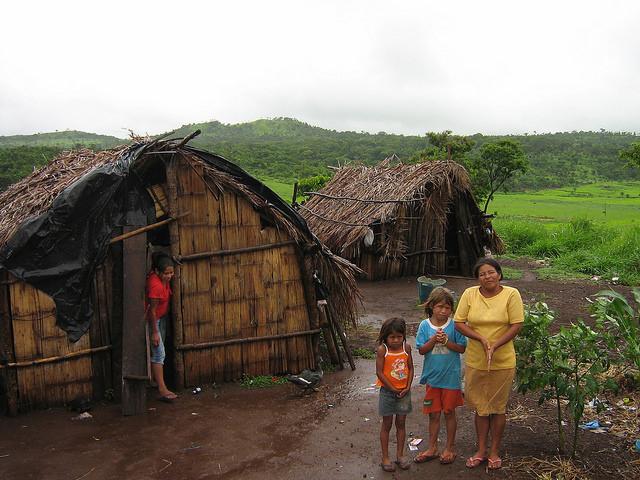 A Guaraní family who live precariously on lands not yet demarcated, under the constant threat of expulsion, in the state of Mato Grosso do Sul, near the border with Paraguay. The largest indigenous population in Brazil is concentrated in this area, where large landowners have taken possession of native lands, leading to the highest number of murders and suicides of indigenous people. Credit: Mario Osava/IPS

viewpoints,” said Leitão, explaining that the parliamentary commission examined several cases and concluded in a 3,385-page report that there are proven illegalities that must be prosecuted.

“There was an improper use of public resources,” the legislator told IPS. “Some NGOs even bought firearms for indigenous people, and in some demarcations the indigenous people did not even want the entire area that was allocated to them.”

His report attacks several NGOs that “received huge sums of money from abroad” and encouraged “invasions of rural properties” claimed as indigenous lands, ignoring the legal property claims of the owners.

“The method of demarcation has defects, everything that has been done lately is being questioned by the justice system,” Leitão said. Also, in his opinion, FUNAI was weakened when it was “taken over by officials with a biased ideology.”

But his main criticism is that the land is “the only focus of FUNAI and indigenous people,” while they ignore issues such as “taking care of the health and education” of native peoples.

As a consequence, the rural bloc lawmaker said that “in the last 10 years the death rate among indigenous people rose 168 percent, not due to war or violent conflicts, but because of diseases,” and 40 per cent of the deaths were of children under five.

It has nothing to do with a shortage of land, he argued, pointing out that there were 817,963 indigenous people – 0.4 per cent of the total population – in Brazil according to the 2010 census, occupying 117 million hectares, or 13.7 per cent of the national territory. In 2010 the population was just over 190 million people, compared to today’s 211 million, according to current projections.

Minimising the importance of the land issue is in the interest of the rural bloc, in permanent conflict with the contenders for land, whether indigenous people or peasant farmers demanding to be settled on land under the government’s land reform programme.

But all experts consider land the key factor for the survival of native peoples.

The current rural bloc offensive, which is favoured by their majority in Congress, threatens to put an end to the indigenous resurgence promoted by Brazil’s return to democracy in 1985 and the constitution approved three years later.

This increase responded to the demarcation of over 80 per cent of the 480 areas already recognised as belonging to indigenous people in Brazil since 1988. There are still 224 areas to be officially demarcated, half of them already identified and the rest still in process.

“The population growth will continue to be reflected in the 2020 census, despite the escalation of violence,” predicted Cleber Buzatto, executive secretary of the Indigenist Missionary Council (CIMI), a Catholic Church organisation.

Many native groups are involved in a revival of their identities and are trying to recover their ancestral lands. This is the case of the Gamela people, who occupied estates seeking to demarcate their territory themselves, in the face of the slow pace of the government’s action, as part of an initiative that triggered the violent reaction by large local landowners, said Buzatto.

The indigenous population, despite the adversities, continue to mobilise for their constitutional rights.

Currently there are 252 native peoples, speaking 150 different languages, of the 1,200 that were spoken when the Portuguese colonialists arrived in 1500, according to ISA. The largest groups are the Guaraní, Tikuna, Terena and Yanomami.

The Free Land Camp, an annual demonstration held in Brasilia, drew nearly 4,000 indigenous people Apr. 24-28, to protest against “violence, setbacks and threats by the Brazilian state,” and defend their rights guaranteed by the constitution and international treaties.

“There is a series of ongoing threats and actions that are related to, and that reinforce, each other,” with a rural bloc representative in the Justice Ministry, and attempts to modify the constitution to invade indigenous lands, disqualify the demarcation system and ensure impunity for the aggressors, said Buzatto.

Criticism of the positions taken by the Brazilian government, particularly with respect to indigenous questions, were expressed in the United Nations Human Rights Council, when it subjected the country to the Universal Periodic Review in Geneva on May 5. “That is something that gives us hope,” said the secretary of CIMI.