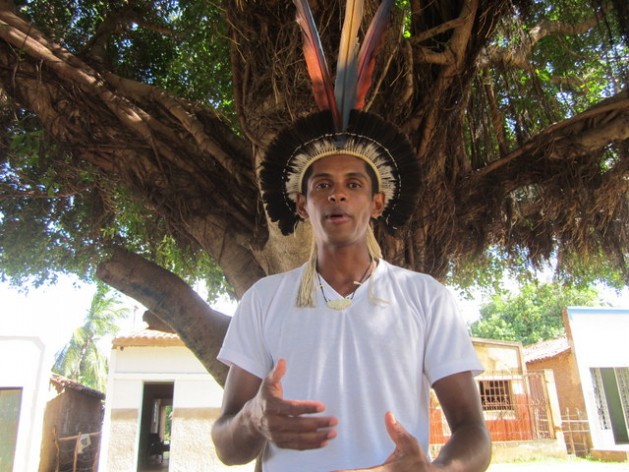 Xokó chief Lucimario Lima searches for new livelihoods for his people, after the Itaparica dam on the São Francisco river cut them off from traditional agriculture and fishing. Credit: Mario Osava/IPS

FOZ DO IGUAÇU/PAULO AFONSO, Brazil, Jan 22 2014 (IPS) - The Itaparica hydroelectric power plant occupied land belonging to the Pankararu indigenous people, but while others were compensated, they were not. They have lost land and access to the São Francisco river, charge native leaders in Paulo Afonso, a city in northeastern Brazil.

“We can no longer eat fish, but the worst loss was that of the sacred waterfall where we celebrated religious rites,” chief José Auto dos Santos told IPS.

Nearly 200 kilometres downriver, the Xokó indigenous community suffers from low water flow, the result of the large dams that have eliminated the regular seasonal rises in river level of the São Francisco, making it impossible to cultívate rice in the floodplains as before and drastically reducing the fish catch.

Similar effects are feared on the Xingú river in the Amazon, where the Belo Monte hydropower plant will divert some of the water in the stretch known as Volta Grande (Big Bend), affecting the native Juruna and Arara peoples.

Some 2,500 km further south, Ava Guaraní people living on the banks of the Itaipu reservoir, on the border with Paraguay, have become fish farmers to maintain their traditionally high fish consumption, given their growing population and the shortage of arable land.

In Brazil a generation of indigenous people grew up on still rather than running waters in the 1970s and 1980s, when the country built a large number of hydroelectric plants, some of them huge, like Itaipu which is shared with Paraguay, and Tucuruí in the eastern Amazon region, both of which opened in 1984.

In that period, five hydroelectric plants were built on the São Francisco river, which mainly crosses semi-arid territory, altering the flow of the river.

One of these facilities, Sobradinho, has a reservoir with an area of 4,214 square km, one of the largest artificial lakes in the world, according to its state operator, Companhia Hidro Elétrica do São Francisco (São Francisco Hydroelectric Company) which has another 13 hydropower plants in Brazil’s northeast región.

When Sobradinho opened in 1982 it ended rice cultivation in the floodplains 630 km downstream in Xokó territory, local people told IPS.

The annual cycle of river level rises practically disappeared in the lower São Francisco after 1986, when the Itaparica dam and its 828 sq km reservoir, which regulates the flow below the Sobradinho dam, were created in the state of Pernambuco.

Deposition of the alluvial soil that fertilised ricefields and regularly renewed fish stocks in lagoons connected to the river by channels also came to an end.

“Without a flowing current, the river has lost force; it’s a shallow pond that can be crossed on foot,” said Lucimario Apolonio Lima, the 30-year-old Xokó chief who is unusually young to be the leader of an indigenous people. He told IPS that he is seeking a sustainable future for his people, who number just over 400.

He is encouraging bee-keeping and other alternative modes of production, fighting to revitalise the São Francisco and actively opposing Brasilia’s megaproject to divert water from this river to combat drought in the north.

“Before doing this, the river must be given life; sick people do not give blood for transfusions,” he said.

Raimundo Xokó, a 78-year-old shaman, told IPS, “My grandparents predicted that the banks alongside the São Francisco would die. I won’t see it, but my grandchildren will.”

The river banks are a thing of the past for the Pankararu who live five km from the huge Itaparica dam, in the state of Pernambuco. Their leaders feel they have been robbed.

“We have nowhere to fish. The company has taken our land and fails to recognise our legal rights to waterside land,”  shaman José João dos Santos, better known as Zé Branco, told IPS.

Former chief Jurandir Freire, known as Zé Indio, is fighting for indemnities totalling millions of dollars, because the native people were not paid reparations for the flooding of their lands, while municipal governments are receiving compensation and non-indigenous farmers have been resettled in newly built villages with irrigated land.

Zé Indio was imprisoned and lost his chief’s post for leading a 2001 protest that tore down electrical transmission lines from the hydroelectric plant that go through mountains in Pankararu territory without any payment being made.

The fertile land in a valley and on mountain slopes that retain humidity, in contrast to the surrounding semi-aridity, is another source of conflict. Since the Pankararu Reserve was demarcated in 1987, the native people have been pressuring the government to remove the non-indigenous farmers who have settled on the best land.

Isabel da Silva, who belongs to a non-indigenous farming family, pointed out that her family and others have lived in Pankararu territory for over a century. “My grandmother was born (in the reserve), and she died aged 91, five years ago,” she said.

“According to the law, we should leave, but that would be unjust,” said da Silva, who works for the Polo Sindical dos Trabalhadores/as Rurais do Submédio São Francisco, a family farmers’ union that achieved resettlement for nearly 6,000 rural families affected by the Itaparica dam.

There are 435 families who have been under threat of eviction for the past two decades. The measure has not yet been carried out for lack of land to resettle them on, according to the authorities.

The Pankararu Reserve covers an area of 8,376 hectares. In 2003 there were 5,584 members of this ethnic group there, according to the state Fundaçao Nacional do Indio (FUNAI – National Indigenous Foundation), responsible for protecting native peoples.

But thousands more have migrated to the cities, especially São Paulo, where they maintain their identity and meet up for indigenous religious rites and celebrations. If land were less scarce, many would return, said Zé Indio.

Land scarcity is also a threat to the Ocoy people, who live on the banks of the Itaipu reservoir. Here 160 families, totalling some 700 people, survive on barely 250 hectares, most of which are protected forests where agriculture is prohibited.

Fish farming, promoted by the Itaipu Binacional company, has emerged as a food-producing alternative in the light of dwindling traditional fishing reserves and the limitations to agriculture.

Indigenous people have excelled among the 850 fisherfolk who participate in the initiative, “perhaps because of their cultural relationship to water,” the company’s head of coordination and the environment, Nelton Friedrich, told IPS.

The Ocoy community harvests nearly six tonnes of fish a year from its 40 net cages, according to deputy chief Silvino Vass.

However, fish farming is not its major source of food and few individuals participate directly in this activity, according to a 2011 academic study by Magali Stempniak Orsi.

Besides, the indigenous people are overly dependent on the company, which supplies them with the fry and fish food, said Orsi, in whose view the project should promote greater community participation.

The Ocoy need assistance to meet their food needs, in contrast to two nearby Ava Guarani communities, who have more land donated by Itaipu Binacional, and grow more crops.

The support given by the Itaipu company to local indigenous people is an exception among hydroelectric plants. In addition to seeking development alternatives, it promotes sustainability in the river basins it manages with its “Cultivating Good Water” programme, which includes 65 environmental, social and productive actions.