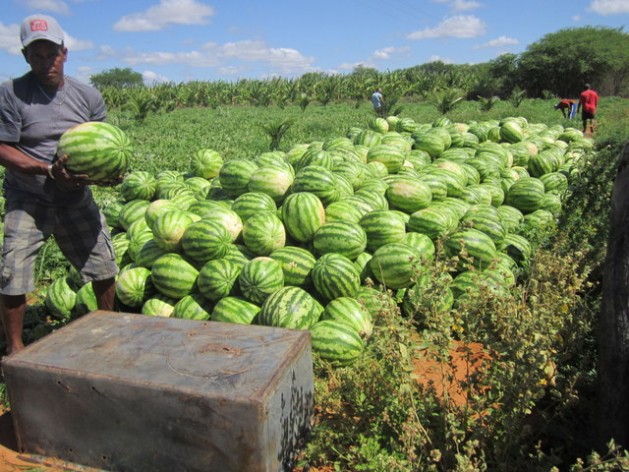 A farmer proudly displays his watermelon crop in the municipality of Gloria, in Bahía state, where he was resettled after the family’s land was submerged by the Itaparica dam in Northeast Brazil. Credit: Mario Osava/IPS

PETROLANDIA, Brazil , Jan 13 2014 (IPS) - Valdenor de Melo has been waiting for 27 years for the land and cash compensation he is due because his old farm was left underwater when the Itaparica hydroelectric dam was built on the São Francisco river in Brazil’s semiarid Northeast.

“I’ll get them, I’m confident,” he told IPS, although he is worried it will be after he retires as a farmer. But the 60-year-old at least has a solid brick house, where he lives with part of his family in a purpose-built farming village where all of the homes look alike.

The Melo family is one of the 10,500 families displaced in 1988, according to official data, by the reservoir of the Itaparica dam, which generates 1,480 MW of electricity.

But the real number of people forced off their land by the dam is nearly double that – close to 80,000 people, Russell Parry Scott, an anthropologist from the U.S., wrote in his book “Negociações e resistências persistentes”, published in Portuguese. The book is based on studies carried out at the Federal University of Pernambuco in Northeast Brazil, where he is a professor.

Melo’s undying hope is based on the process that began with the construction of the dam and the 828-sq-km reservoir, which submerged four towns as well as riverbank fields along a 150-km stretch of the border between the states of Bahía and Pernambuco.

Unlike other hydropower plants in Brazil, the Itaparica dam triggered a successful, organised movement by the rural families who were displaced.

Rural workers associations from 13 municipalities came together in the Pólo Sindical dos Trabalhadores Rurais do Submédio São Francisco – the rural workers union of the lower-middle São Francisco river – and began to hold protests when construction began, in 1979.

The demonstrations drew up to 5,000 protesters, who blocked roads and occupied towns set to be flooded, as well as the offices of the construction company and the construction sites, in some cases for a number of days, defying harsh police crackdowns.

After a seven-year battle, the state-run São Francisco Hydroelectric Company, which owns 15 plants and supplies the Northeast with electricity, gave in and signed the 1986 Agreement to resettle rural families, pay them compensation for the property they lost, and provide them with monthly maintenance subsidies pending the first harvest on their new land.

Under the agreement, a total of 6,187 rural families were to be resettled in new homes, with up to six hectares of irrigated land and a more extensive area of dryland for each family.

The amount of land varied according to the number of family members who could work it, with women counting for 60 percent of the value assigned to men.

The Pólo Sindical took part in drafting the resettlement plan and kept up the pressure on the company and the government, as the programme suffered delays.

The end of the 1964-1985 military dictatorship and the return to democracy empowered social movements and favoured the Pólo Sindical’s triumph.

The more resistance the displaced small farmers faced, the more their tenacity grew. They sought to prevent a repeat of the abuses of earlier years, when thousands of Brazilians were forced off their land and out of their towns and only given meagre cash compensation, or none at all if they did not have legal title to their land, when other hydroelectric dams were built on the São Francisco river.

The rural families who accepted the resettlement agreement – 85 percent of those who were displaced, according to Scott – were relocated to 126 new “agrovilas” or farming villages scattered throughout several municipalities, with an average of about 50 families each.

“We managed to get part of the families resettled, but many left – they didn’t believe in our movement, they preferred to take the compensation payment,” and they moved to the impoverished outskirts of Brazil’s larger cities, the general coordinator of the Pólo Sindical, Adimilson Nunis, told IPS.

The agrovilas were built with the necessary infrastructure in sanitation, electricity, water, schools, administrative and health posts, he said. And the villages were placed around 12 areas of land that were to be irrigated, where each family had their most productive land.

But the irrigation equipment that would enable the families to start producing on the land did not start arriving until 1993, four years after cultivation was set to begin, and only in three of the 12 areas. Irrigated production began on six other areas within the following five years.

But the Melo family had the bad luck of being resettled in the Proyeto Jurante in the municipality of Gloria – one of the three agrovilas still under construction.

Most of the residents gave up and moved away. “In agrovila 5 only one family stayed, and only three stayed in agrovila 9,” waiting for the irrigation equipment, said Maria de Fátima Melo, Valdenor’s daughter, who hopes to follow in her father’s footsteps and become a farmer, once the irrigation project is set up.

But she got a municipal job as a nurse “just in case,” she told IPS.

The nine projects that have been operating since the 1990s have brought higher incomes and technological advances to 4,910 families, according to the São Francisco and Parnaíba valley development company, CODEVASF, the government agency in charge of managing the irrigation systems and providing technical assistance.

Gloria is now a watermelon-producing area. The resettlement project contributed to that when irrigation equipment was received in 1993 by 123 families relocated to three agrovilas, who also run an experimental centre, Dorgival Araujo Melo, a farmer and town councillor for the Green Party, told IPS.

“Irrigation is the solution for the Northeast, but with water-saving technologies” to adapt to the region’s semiarid climate, he argued.

He is proud of having managed, in his irrigation area, to replace wasteful sprinkler systems with drip irrigation tubing.

“Life improved with the new house, the nearby school, and the irrigated land,” said Ana de Souza Xavier. But, she added, she liked it better when the neighbours didn’t live so close together, and when she had a large yard “for raising goats and chickens and growing vegetables.”

Her husband Oswaldo Xavier, meanwhile, said he did not like the isolation of rural life.

The couple, whose three grown children are independent and have received higher education, were resettled in another agrovila near Petrolandia, a city built to replace another that was flooded when the reservoir was filled.

With three hectares of irrigated land and 22 hectares of dryland that they have been farming for the past 20 years, the family has prospered growing coconuts.

“Before this we suffered from the failure of crops of beans and watermelons,” her husband told IPS.

The experience in Itaparica, where nearly 20,000 hectares of irrigated land are worked by family farmers, represents an alternative form of agricultural development, different from the model of large-scale production of crops for both domestic consumption and export, requiring large investments and technologies that are unaffordable for small farmers.

But it is unlikely that Itaparica will inspire similar solutions for conflicts generated by other megaprojects, such as the controversial Belo Monte dam in the Amazon rainforest.

As of 2010, the costs of the rural resettlement programme were equivalent to 85 percent of the total investment in the construction of the hydroelectric plant, and in 2014 will be equivalent to 100 percent, according to Brazil’s court of audit, which oversees the state’s financial administration.

Settling each family from the Itaparica dam cost four times more than in other government-backed irrigation projects, it reported.