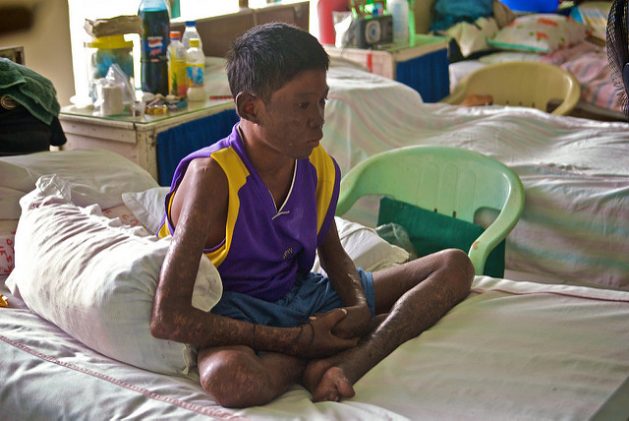 The Philippines has the highest incidence of leprosy of any country in the region – about 1,700 new cases have been identified in each of the last three years. Credit: moyerphotos/CC by 2.0

MANILA, Mar 2 2019 (IPS) - The stubborn challenge of diagnosis and treatment of leprosy among difficult to reach populations in the Philippines should soon become easier with the rollout of a mobile app connecting field health workers with physicians and clinics.

Officially launched at the end of January after years of testing, the app was created by Philippine developer MetaHelix in cooperation with the Department of Health (DOH) and pharmaceutical company Novartis. It will allow barangay (village) health workers to connect remotely with specialists to confirm diagnoses and plan treatment of isolated leprosy patients.

First launched as a pilot in 2014, the Leprosy Alert and Response Network System (LEARNS) app allows healthcare workers to “send images of suspect leprosy lesions and symptoms to a specialist”.

The new mobile application that was tested in the Philippines for more than a year highlights ongoing efforts against leprosy, or Hansen’s Disease, which is sometimes called “the world’s oldest diagnosed disease”.

In most of the world leprosy is largely considered a disease of the past. According to the World Health Organisation (WHO), leprosy was eliminated as a global public health problem in 2000 because it had a prevalence of less than 1 case per 10,000 people.

However, one of the few remaining places where the disease remains an elevated public concern is the Philippines, which makes the country an appropriate venue for the “Regional Assembly of Organisations of People Affected by Leprosy in Asia,” being held in Manila from Mar. 3 to 5.

The conference is a joint project of the Philippine government-run Culion Sanitarium and General Hospital (CSGH), the Coalition of Leprosy Advocate of the Philippines (CLAP), and the Sasakawa Memorial Health Foundation (SMHF)/the Nippon Foundation (TNF), and seeks to find ways to overcome the last stubborn obstacles to completely eradicating leprosy.

The issues faced by public health advocates and victims of the disease in the Philippines are emblematic of problems faced throughout the region: Difficult detection and treatment of often isolated sufferers, a lack of public awareness and understanding of leprosy, and low prioritisation of public health efforts to treat leprosy and its social impact on the part of governments.

The treatment of leprosy in the Philippines throughout most of the country’s history has been typical of the way societies everywhere have handled it. Largely ostracised by communities and even their own families, leprosy sufferers were isolated in dedicated facilities and kept out of sight. The two best-known facilities in the Philippines are the CSGH, once the largest facility of its kind in the world, located on Culion Island in the Western Philippines; and the Tala Sanitarium – officially known as the Dr. Jose N. Rodriguez Memorial Hospital – located in Caloocan, a distant suburb of Manila.

Although both facilities are still technically operational, better understanding of the disease and its low communicability has allowed health officials to shift most of their efforts to community-based treatment. According to Dr. Mary Ann Navarro, a Department of Health administrator in Palawan, where a minor outbreak of leprosy among indigenous people was detected in late 2017, in sitio treatment is often the only feasible approach.

“Better treatment options and the relatively low risk of transmission means that it’s not necessary to isolate patients,” Navarro told IPS. “Many cases, such as the ones discovered last year here [in Palawan] are among people with little access to healthcare, so our best option is to bring treatment to them.”

“That also helps to reduce some of the social stigma patients face, by giving us a chance to educate their communities and eliminate some of the fear of the disease,” she added. “Changing social attitudes still is a big challenge, however.”

Situations like the outbreak in Palawan, where eight cases were discovered among an indigenous community in the southern part of the island, are relatively rare. Most cases, according to a local government official, are individuals who remain in the community, but often struggle for acceptance.

“To our knowledge, we have about 10 people from this barangay who come to the health centre for treatment,” Alexander “Bong” Medina, chairman of a barangay in San Jose Del Monte in Bulacan Province north of Manila told IPS.

“The treatment is provided free, and we do our best to assist them socially, but it’s difficult,” Medina explained. “These are poor, what you might call marginalised people to begin with, and they often don’t realise there is assistance available until it’s too late, or they are afraid to come in because of the shame. And we don’t really have resources to go seek them out.”

The Western Pacific Regional Office of the WHO views the Philippines as somewhat of an outlier in terms of leprosy incidence. The Philippines has the highest incidence of leprosy of any country in the region – about 1,700 new cases have been identified in each of the last three years, although that rate is half what it was a decade ago – and is largely responsible for the region being behind the rest of the world in achieving the 1 in 10,000 benchmark.

According to data from the Philippines’ Department of Health, although the overall prevalence of leprosy is less than 0.4 cases per 10,000, 1,660 new cases were identified in 2017 alone, with about 6.7 percent of those being children under the age of 15. This Southeast Asian nation, which comprises some 7,000 islands, has a population of over 104 million.

To address the problem, the Philippine government in 2016 launched the National Leprosy Control Programme (NLCP), a multi-agency effort involving the DOH, WHO, and a number of private sector and NGO partners with the goal of “a leprosy-free Philippines by 2022.”

To better calibrate the programme’s response and identify pockets where leprosy is still prevalent, the first major initiative of the NLCP is the completion of a baseline population survey, being conducted in cooperation with the Regional Institute for Tropical Medicine and expected to be completed sometime this year.

The programme is also working to raise public awareness and understanding of the disease by promoting various activities, such as World Leprosy Day in January, a national-level Leprosy Control Week in February, and National Skin Disease Detection and Prevention Week, which is held the second week of November.