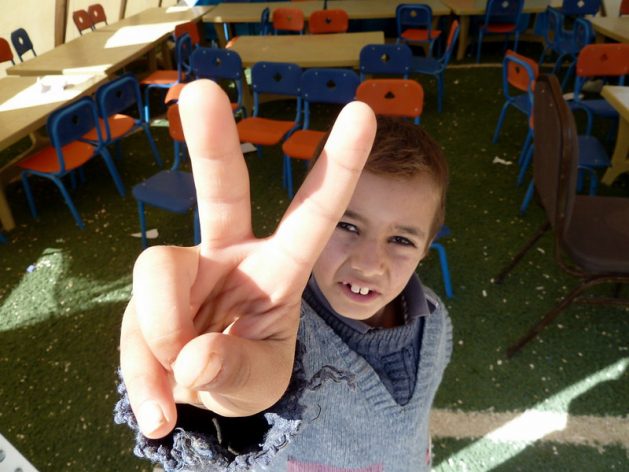 Globally 75 million children who cannot access education as a result of crises. A dated photo of a Syrian child in a refugee camp in Jordan. Credit: Robert Stefanicki/IPS.

MBABANE, Aug 13 2020 (IPS) - “Not being able to go to school is not something I’d wish on any child in this world,” said 21-year-old Nujeen Mustafa, a young advocate for refugees who fled the Syrian war with her sister. Mustafa, who now lives in Germany, is also the United Nations Human Rights Council (UNHCR) high profile supporter.

Speaking at a virtual seminar hosted by Education Cannot Wait (ECW) a day after the organisation launched its 2019 Annual Results Report, Mustafa said growing up in Syria was not easy. Even before the war, she said, she had to educate herself at home via TV, with the assistance of her older siblings, because government buildings were not accessible to someone who had to use a wheelchair like herself. Mustafa was born with cerebral palsy.

“As the conflict started, the situation deteriorated even further,” Mustafa told over 700 participants of the webinar held on International Youth Day, Aug. 12. “I had to flee because my safety was jeopardised.”

Mustafa said the 75 million children who cannot access education as a result of crises was a demonstration of a failure on everyone’s part and that it was “unacceptable and inexcusable”. Her story resonates with many of the children in countries experiencing emergencies or conflict as highlighted in the ECW annual report titled Stronger Together in Crises.

Speaking at the same event, former United Kingdom prime minister Brown said the world has a lost generation of 30 million refugees, 40 million displaced and 75 million in conflict and emergency zones.

“We now have the COVID generation deprived of school,” said Brown who is chair of the ECW high-level steering group and also the U.N. special envoy for global education. “Some people think 30 million children will never return to school even though they have been there before the pandemic.”

Brown said it was necessary to send a message of hope based on three pillars. Firstly, faith that education can bridge the gap between what people are and what they have in themselves to become. Secondly, the message should be based on the belief that every child who is in a conflict or emergency zone can be brought to school. Finally, he said the message should be based on confidence that the $310 million needed by ECW to do its work can be raised.

“Hope doesn’t just die when a refugee ship is lost at a sea,” said Brown. “Hope dies when young people cannot plan and prepare for the future because there’s no school, no education within their grasp.”

Although there is still a long way to go in supporting children and youth in conflict countries, the Stronger Together in Crises Report shows significant progress. From 2017 to 2019, the primary enrolment rate for refugee children improved from 53 percent to 75 percent in Uganda and from 62 percent to 67 percent in Ethiopia. ECW disbursed $131 million across 29 countries in 2019, more than its 2017 and 2018 investments combined.

“Globally, the share of education in all humanitarian funding increased from 4.3 percent in 2018 to 5.1 percent in 2019, representing a record amount of over $700 million,” reads the report.

ECW director, Yasmine Sherif, attributes the progress made to three reasons. Firstly, breaking down silos and having all stakeholders working together to mobilise resources.

Secondly, Sherif said, removing bureaucracy has resulted in moving with record speed in response to COVID-19.  She said just a few weeks after the World Health Organisation declared it a pandemic, ECW was able to deliver in 27 countries and exhaust its entire emergency funding that was available and attracted more funding for a second round.

Sherif said 3.6 million children have been reached through a holistic approach that caters the needs of a child and youth from mental health and psychosocial services to school feeding where WFP plays an important role. Considering that teachers are mentors and role models to young people during their formative years, ECW involves their training.

ECW also provides cash assistance that allows most families of the 75 million children who are living in extreme poverty to send their children to school because they may not be able to do so even if the school itself is free. It also creates infrastructure that is conducive to children with disabilities and provides protection especially in countries where there is violence and conflict. It also empowers governments to build their own coordination units and sustain the investments made

The U.N. Children’s Fund (UNICEF) is hosting the ECW secretariat. UNICEF executive director, Henrietta Fore, said there is not enough advocacy to support children in conflict and emergency zones with learning, yet education is part of the humanitarian and development agenda.

“It is needed in the first day of the crises as you can see from Nujeen and it is needed five years later,” said Fore. “So, we have to think differently, it is a continuum of assistance we’re giving.”

She said the best thing that has been discovered is giving the world a great idea. One great idea that is considered is, if everyone could join with connecting every young person to learning everywhere, it would make a big difference.

“If we could do this in the next couple of years, it would change the world and it would make people realise that education is the foundation of all humanitarian and development response,” she said.

Ensuring that the education needs of children in crises zones needs resources and ECW is appealing for more support.