The First Global Event in the History of Humankind

Branko Milanović is a visiting professor at the City University of New York. Prior to that, he was, among other things, senior economist of the research department at the World Bank. For his book Global Inequality. A New Approach for the Age of Globalization he won the Hans-Matthöfer-Prize awarded by the Friedrich-Ebert-Stiftung. Most recently he published Capitalism, Alone: The Future of the System That Rules the World. 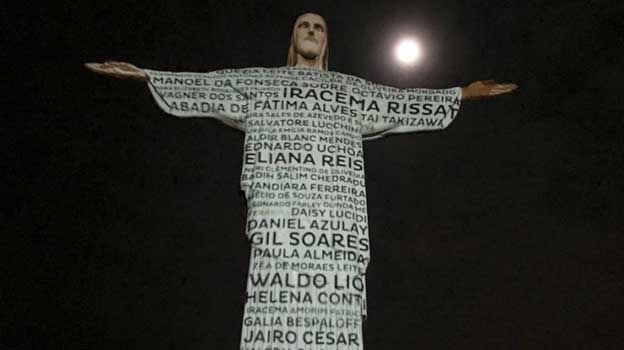 Rio de Janeiro’s iconic Christ the Redeemer was illuminated in the names of victims lost to COVID-19 in an online ceremony called “For Every Life” that paid tribute to the 60,000 victims lost in Brazil and 500,000 lost worldwide. About 87,000 Brazilians heard messages of hope and solidarity combined with music and prayer in a live broadcast over social media. It recognized the losses of families and selfless work of healthcare workers and others helping the country through the pandemic. July 2020. Credit: UNIC Rio

NEW YORK, Dec 11 2020 (IPS) - The current pandemic is probably the first global event in the history of the human race. By ‘global’ I mean it has affected almost everybody, regardless of country of residence or social class.

If, in a couple of years — when hopefully it is over and we are alive — we meet friends from any corner of the world, we shall all have the same stories to share: fear, tedium, isolation, lost jobs and wages, lockdowns, government restrictions and face masks. No other event comes close.

Wars, even world wars, were limited: people in Switzerland, let alone in New Zealand, did not have meaningful war stories to share with those from Poland, Yugoslavia, Germany or Japan. And in the past 75 years wars were local.

Many young people might have protested against the Vietnam war but most experienced none of its effects. People were outraged at the siege of Sarajevo, bombardment of Gaza or Iraq ‘shock and awe’.

But for 99.9 per cent of mankind that outrage did not change their daily routine one bit: they still got up early to go to school or work, laughed with colleagues, maybe went out for a drink and ended up at a karaoke bar. They had no stories to share with the residents of Sarajevo, Gaza or Baghdad — nothing in common.

Even football — and its fanatical supporters tell themselves world events mimic football — cannot compete. The last World Cup final was watched by 1.1 billion people, about one out of every six people in the world. There were still many who ignored its existence and could not care less which team won or lost.

Into the history books

Covid-19 will enter the history books as the first truly global event also thanks to our technological development: not only are we able to communicate across the globe but we can follow, in real time, what is happening practically everywhere.

Since infection, disease and possible incapacitation and death threaten all of us, even people who otherwise have not had much interest in news check their smartphones for updates on deaths, infection rates, vaccines or new therapies.

Covid-19 seems itself to have been designed for that role. Although its deadliness increases with age, its effects are sufficiently uncertain that even much younger and healthier populations are not left entirely carefree. Had Covid-19 been less random, it would have been less feared.

This global event is however also an odd event. It requires that people do not interact physically with each other. It thus brings out another, new dimension. Our first global event will have been the one where we never met face-to-face in real time with other people who lived through it.

Covid-19 probably made us leapfrog about a decade in realising the possibilities of decoupling work from physical presence in the workplace.

On reflection, however, this makes perfect sense. To be global, the event has to be experienced more or less equally by everyone at the same time. Limited by physical contact or presence, however, we cannot reach many people, simply because there is no possibility for each of us to meet thousands, still less hundreds of thousands, of others.

So, the first global human event, ironically, had to be an event devoid of human contact and physical touch — it had to be experienced virtually.

This is also why this pandemic is different from that of a century ago. Information could not then be easily transmitted nor shared. By the time people in India were dying of Spanish flu, Europe was recovering and was ignorant of, or indifferent to, deaths in India. But India too hardly heard of the deaths in Europe until the pandemic invaded it.

What will remain, other than people’s reminiscences, of this global event? There are only a few things that we can say with any certainty.

The pandemic will have accelerated globalisation in the second factor of production—labour. (The first factor, capital, is already globalised, thanks to the opening of national capital accounts and the technical ability to move vast amounts of money around the world and to build factories and offices anywhere.)

Covid-19 probably made us leapfrog about a decade in realising the possibilities of decoupling work from physical presence in the workplace. Although in many activities we may, after the pandemic is over, go back to sharing physical offices, working in factory halls and so on, in many others we shall not.

This will not have an effect only on people working from home—the change will be much more profound. A global labour market will come into existence without the need for migration.

In some segments of the world economy (such as call centres or software design), that market already exists. But it will become much more common. The pandemic will be a giant leap forward for ‘mobility’ of labour — a peculiar mobility, that is, where individual workers will stay put at their places of residence but work in ‘offices’ or ‘factories’ miles away.

People who worry that globalisation might go backwards will be surprised. Due to the trade war between the United States and China, global value chains and trade might suffer a temporary setback. But in terms of labour mobility or, more exactly, labour competition — which is extraordinarily important — it will move forward.