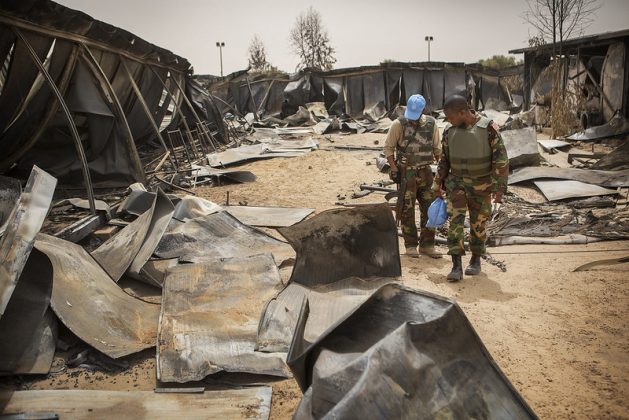 Amnesty International investigations revealed that 18 people were killed and dozens injured, despite military claims that the 2020 coup was bloodless. The organisation has listed several instances of fatal shots being fired by security forces, backed up by witness testimonies and statements from the United Nations Stabilization Mission in Mali (MINUSMA) (pictured here in this file photo). Courtesy: UN Photo/Sylvain Liechti

UNITED NATIONS, Apr 23 2021 (IPS) - It has been about a year since anti-government demonstrations and a coup in Mali, which saw 18 people, including a 12-year-old boy being killed. But there has been no justice for the families of those injured and killed by defence and security forces during last year’s May to August protests.

Today, Apr. 23, Amnesty International released the findings of a report into injuries and fatalities that occurred titled “Killed, wounded, and forgotten? Accountability for the killings during demonstrations and the coup in Mali”.

Following field and remote interviews with victims’ families, civil society representatives, journalists and members of the judiciary, it chronicled the use of deadly force by armed forces in the towns of Kayes and Sikasso, as well as the capital Bamako.

The military seized power in Mali after forcing President Ibrahim Boubacar Keita to resign. It was Mali’s fourth coup since independence in 1960 and its second in a decade. His resignation followed months of opposition protests in the capital and the soldiers who orchestrated the coup stated that it was done to save the country. The international community strongly denounced the ouster, with the soldiers promising to oversee a transition to new elections and elect an interim, civilian leader.

According to Amnesty International, investigations revealed that 18 people were killed and dozens injured, despite military claims that the coup was bloodless. The organisation says the lack of accountability is troubling.

“Many victims were hit or wounded in the chest, sometimes in the back. Many were bystanders or people at work or at home, indicating that security forces were not firing in self-defence or response to an imminent threat of death or serious injury – in contravention of international standards,” Amnesty International said.

The document lists several instances of fatal shots being fired by security forces, backed up by witness testimonies and statements from the United Nations Stabilisation Mission in Mali (MINUSMA). This included the May 6 killing of a man in Sikasso, a city in southern Mali.

“Despite this, the authorities have not investigated the use of firearms by law enforcement against demonstrators in Sikasso leaving the families of those killed without justice, truth and reparation,” the report said.

Five days after the Sikasso incident, violent protests against police deaths resulted in more bloodshed. According to the report, an off-duty police officer shot a 17-year-old who was fleeing detention. It adds that while the officer was suspended, the teen’s death sparked widespread protests, with angry mobs attacking police stations and government buildings. It states that police fired live rounds in the crowds, leaving a 30-year-old man and a 12-year-old boy dead.

The Amnesty report says that a lack of accountability for police deaths triggered uprisings in other areas in Mali, adding that in the capital, protests in July which turned violent were ‘heavily repressed by the authorities,’ adding that armed forces fired into throngs of demonstrators, leaving 4 people dead and dozens injured.

“Although some demonstrators threw stones at security forces, occupied public buildings and at times, refused to comply with orders given by law enforcement officials, it is clear from the cases documented by Amnesty International that most of the killings and serious injuries resulted from the excessive use of force by security forces,” the report said.

Demonstrators took to the streets with numerous grievances. There was anger over the results of the parliamentary elections, stringent measures in response to the COVID-19 pandemic, including restrictions to freedom of movement and peaceful assembly, high unemployment, security and social grievances.

However, among bystanders also became casualties, including Ibrahim Traore’, a 16-year-old boy, whom the report states was shot twice by police. His brother told Amnesty International that he was denied a copy of Traore’s autopsy report.

The rights group says it worked hard to ensure that it could put a name and face to the victims, so that they are not forgotten. It adds despite progress, accountability is lacking. They say that they have been told that investigations into lethal use of force by security forces were opened, but at the time, February 2021, those probes were in the preliminary stages.

“The Malian authorities must show their determination to fight impunity by first acknowledging these killings. Victims of illegal use of force and firearms and their families must be provided with justice, truth and full reparations,” Amnesty International said.