Stories written by Mohammed Omer
Mohammed Omer reports for IPS about surviving in the blockaded Gaza Strip. Much of his work arises from his personal experience in the volatile situation of this Palestinian territory. He was the co-winner of the Martha Gellhorn Prize for Journalism 2007. 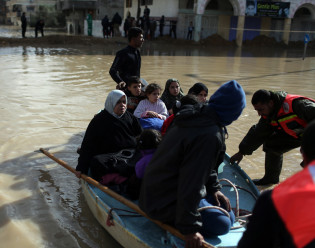 By Mohammed Omer
Mohammed Assaf is on to a winning track with recordings in Dubai and performances scheduled across Arab countries after winning the Arab Idol contest. But the 23-year-old who has become Gaza’s pride is virtually disowned by the government in Gaza.

By Mohammed Omer
Fouad Hijazi was watching the 7 p.m. news with his wife and eight children when a missile fired by an Israeli F-16 hit their house in Jabalyia refugee camp, Gaza’s most densely populated area.

By Mohammed Omer
Mai Ahmed, a 26–year-old from the West Bank fell in love over the Internet with Mohammed Warda from Nussirat refugee camp in Gaza after they ‘met’ on the Internet. The Israeli government refused permission for her to travel to Gaza. Mai travelled to Jordan, flew from there to Egypt, drove across the Sinai, and then crossed through a tunnel into Gaza, where she now lives. “It’s a story I will tell my grandchildren,” she says.

By Mohammed Omer
When the lights go out, Gazans look for generators to switch on. And, they find people to talk to. With so many power cuts over so long now, people are giving themselves the somewhat dubious comfort that human relations may have improved as a result of these power cuts.

MIDEAST: In Prison, and Denied Education

By Mohammed Omer
Access to education for Palestinian prisoners in Israeli jails is getting worse as international organisations remain unwilling or unable to intervene. Secondary- school students here completed their exams in June, and received their results by end of July. However, the 1,800 Palestinian prisoners who were supposed to complete their exams were not permitted to do so by the Israeli Prison Service.

By Mohammed Omer
Sitting by the hospital bed of freelance photographer Mohammed Othman, Ashraf Abu Amrah knows that nobody owns a freelance journalist from Gaza who gets injured, or dies.

By Mohammed Omer
Many hoping to find free movement between Egypt and Gaza have found the border gates at the Rafah crossing closed. Egyptian officials closed the gates on Saturday, according to Palestinian officials.

By Mohammed Omer
Abu Sumaia’a Al Suoarki is 29 years old and a Muslim, according to the personal identification card issued by the Egyptian government. These days, however, his religious belief is no longer just a detail on his ID card, but is something he openly practices every day.

By Mohammed Omer
Abu Mustafa Al Matriah and Abu Ahmed Abu Amrah, both Bedouins in Northern Sinai are thankful to the army that they can complete their daily deliveries without having "to pay so much baksheesh" (gratuity).

MIDEAST: Mubarak Name Easier to Erase Than his Legacy

By Mohammed Omer
It was easy enough to rename Mubarak Children’s Hospital the Al Tahrir Hospital in Gaza. Not so easy is the task of managing patients who need to cross over to the Egyptian side for treatment, or come back in.

By Mohammed Omer
Mustapha Suleiman, 27, from J Block east of the Rafah crossing with Egypt, crosses through gaps in the iron fence on the border carrying bread, water, meat cans and a handful of vegetables for Egyptian soldiers stationed on the other side.

By Mohammed Omer
Khalid Ibrahim Al-Laisi has been a soldier in the Egyptian army for 20 years. Today, far from shooting protesters, he says the time has come "to revolt against oppression."

By Mohammed Omer
A Bedouin youth casually spreads out a piece of cloth before a police headquarters in Sheikh Zwayyed town in Sinai, the vast desert area to the east of Cairo across the Suez. "I will leave when Mubarak leaves," he says.

MIDEAST: But the Coffins Do Come In

By Mohammed Omer
Samir Tahseen Al-Nadeem died after waiting 35 days for an exit permit for treatment for his heart condition. He was 26. The medicines he needed could not get in. But the coffins do.

By Mohammed Omer
As the many colours of the fish and flowers slowly disappear from the Gaza landscape, the already grim prospects of the besieged residents begins to look even bleaker.

MIDEAST: The Lights Are Going Out on Gaza

By Mohammed Omer
The Muslim festival Eid approaches, but not the end to power cuts that have darkened the month-long Ramadan fasting leading up to the festival. Or to the agony of Gazans, made worse by the reminder that it's approaching festive time.

By Mohammed Omer
Raed Abu Hammad, 27, was allegedly kicked to death by Israeli prison wardens on Apr. 16. This while Palestinian prisoners in Israeli jails have been on hunger strike since Apr. 7 to press for better treatment.
Next Page »
ADVERTISEMENT ADVERTISEMENT