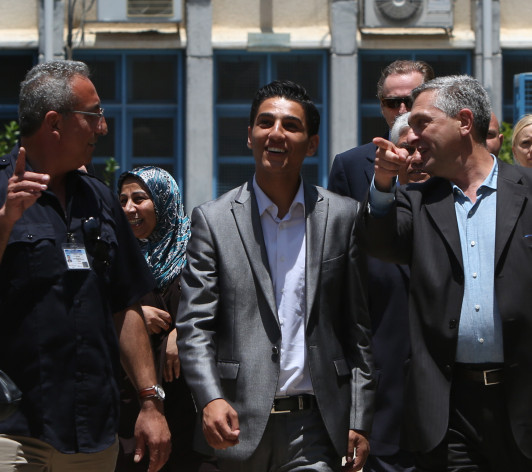 Assaf visiting the UN offices in Gaza. He has been appointed UN Ambassador of Goodwill. Credit: Mohammed Omer/IPS.

GAZA CITY, Jul 16 2013 (IPS) - Mohammed Assaf is on to a winning track with recordings in Dubai and performances scheduled across Arab countries after winning the Arab Idol contest. But the 23-year-old who has become Gaza’s pride is virtually disowned by the government in Gaza.

This winning Arab Idol sang out from a refugee camp – Assaf grew up in the Khan Younis refugee camp in the south of Gaza strip. When he returned to Gaza after winning the contest last month, he brought rare joy to a besieged people. Thousands gathered at the border to receive him. But officials of the de facto-government in Gaza were absent, and silent.

The two Palestinian parties, Hamas which rules Gaza, and Fatah which rules the West Bank through the Palestinian Authority offered obviously split responses to Assaf’s win.

What many, and of the Islamist kind particularly, dislike about him is that he also sang love songs.

Within the Hamas government Assaf received some attention from the ministry of culture. Some political leaders from outside of Hamas also held a small reception for him. It did not seem to help that Fatah “adopted” Assaf with gusto, as a Palestinian, even though he is from Gaza.

At the annual graduation ceremony for about 500 students from Palestine University – where Assaf is a student – a university board member celebrated this year’s graduate group as “Assaf’s batch”. Hamas Prime Minister Ismail Haniyeh who attended the ceremony spoke of the graduates as “Palestine’s batch”.

Haniyeh seemed out of tune with the mood. Minutes after his departure, the crowds went wild singing Assaf’s award-winning songs.

Speaking out through the silence of the Hamas government, member of the legislative council Dr. Yahya Mussa seemed to challenge Hamas’s official position by declaring that Assaf is indeed an ambassador to the world.

“I see the rise of promising Palestinian star Mohammed Assaf as adding quality to the defenders of the cause and as a bearer of the flame of Palestinian culture,” he said.

His nationalistic songs too have become a problem for Hamas. Locally and internationally, audiences have particularly enjoyed Assaf’s rendition of the uplifting song “Ali el Koffeyeh” (“Raise Your Keffiyeh…”). His new popularity is making his songs a symbol of hope and unity for Palestinians.

Among Arabs, Assaf is emphatically the voice of Palestine, for his distinct Palestinian accent, and for the many nationalistic Palestinian songs he sings. Everyone heard the lament and national longing for Palestine in his voice. But what many, and of the Islamist kind particularly, dislike about him is that he also sang love songs, such as the Backstreet Boys hit, “I want it that way”.

Mohammed Abed, Gaza-based journalist told IPS that the Hamas government kept silent because it believes such songs are too profligate. “The government could have given him the chance to sing national songs, but only provided him police escort and security.”

For Assaf, his music will always be more than just music – it is a message. “The media has always attempted to ignore our art and music, as if Gaza is only a war zone,” Assaf told IPS. “If this success shows something, it shows we are a peace-loving nation. And we can be very creative, if only we are given the chance.”

Dr. Ahmed Yousef, former advisor to the Hamas Prime Minister, said Hamas cannot deny the fact that Assaf has become a phenomenon. “Art unites Palestinians while politics divides them. This in itself is a certificate of failure for Palestinian politicians,” he told IPS.

To a people starved of success and recognition, Assaf is now a legend. On the Arab Idol talent show on MBC television featuring young singers from the Middle East he simply captivated audiences – and judges.

Assaf’s success was hard won. Before being crowned Arab Idol he was virtually unknown to the wider Palestinian population. Assaf began singing as a boy at weddings in Gaza to earn a little money. He later studied journalism.

It is legend also that he came close to not winning the contest, and close to not being there to win. It took time to get permission to leave Gaza. Even with permission, Assaf almost missed his big chance by getting stuck at Rafah border crossing and roadblocks in between home and the hall in Cairo.

It seemed he would never reach his first audition, but he risked his life by jumping a wall at a roadblock to get through to Cairo. He still arrived late. But then fate and a friend stepped in – a fellow Palestinian singer gave up his slot to give Assaf a chance.

Assaf is now set for the big stage. He is scheduled to sing together with Columbia’s superstar Shakira at the opening ceremony of the football World Cup in Brazil next year.

Among the prizes he has received is a Chevrolet Camaro. It’s unlikely Assaf will be able to drive his new car in Gaza, as Israel continues to ban entry of eight-cylinder engine vehicles. Israel is of course not on his side, but nor, it seems, is his own government.