MONTEVIDEO, May 26 2008 (IPS) - The death and replacement of FARC chief “Manuel Marulanda” will bring neither a breakdown nor a change in direction in the Colombian rebel group, which has been militarily weakened and has fallen silent on the political front, according to experts on Latin America’s longest-lived guerrilla movement. 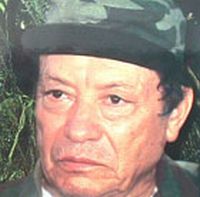 The death of the founder and top leader of the FARC (Revolutionary Armed Forces of Colombia), whose nom de guerre was “Manuel Marulanda”, was announced Saturday in an interview with Defence Minister Juan Manuel Santos in the Semana magazine and confirmed Sunday by “Timochenko”, who forms part of the insurgent group’s seven-member secretariat, in a video broadcast by the Latin American TV channel Telesur.

“A great leader is gone,” said “Timochenko”, whose real name is Timoleón Jiménez. He said Marulanda died of a heart attack on Mar. 26, in the arms of his girlfriend and surrounded by his troops.

The late rebel chief, also known as “Tirofijo” or Sureshot, was born in 1928 or 1930 – according to conflicting versions – in the coffee-growing town of Génova in the central Colombian province of Quindío.

His death was preceded by two other major losses for the FARC.

On Mar. 1, “Raúl Reyes”, the group’s international spokesman, was killed in the aerial bombing of his camp, which was located in Ecuador. The cross-border incursion by the Colombian military sparked a serious diplomatic crisis in the Andean region.

And on Mar. 6, another member of the FARC secretariat, “Iván Ríos”, was killed by one of his men, who cut off his hand to collect the huge reward offered by the government.

Marulanda “is an extremely wary ‘campesino’ (peasant farmer) and a born military strategist,” was how he was once described by Gilberto Vieira, secretary general of Colombia’s Communist Party from 1946 to 1991, who knew the rebel chief very well.

Born into a poor rural family, Pedro Antonio Marín took up arms at the age of 18, after the assassination of Liberal Party leader Jorge Eliécer Gaitán in 1948, which triggered a decade of political violence known as “La Violencia”.

According to his official biographer, historian Arturo Alape, Marín and his brothers and cousins joined the armed struggle in 1949, because “rising up in arms was the only way to survive.”

In 1950, he took the name Manuel Marulanda Vélez, in honour of a trade union leader who was tortured and killed.

During an armistice that began in 1957, after the collapse of the four-year dictatorship of General Gustavo Rojas Pinilla, Marulanda was even a public employee, working as a highway inspector.

In 1964, Conservative President Guillermo León Valencia ordered, as part of the U.S. Latin American Security Operation (Plan LASO), an attack on the village of Marquetalia, where 49 families of former combatants, led by Marulanda, were living.

The military operation forced the families to scatter, and Marulanda, along with several dozen other guerrilla fighters, created the FARC in the southern region of El Caguán, in the province of Caquetá. More than four decades later, the group still maintains its original aim, agrarian reform.

In 1984, a peace agreement between the government of then president Belisario Betancur and the FARC led to the creation of a leftwing political party, the Patriotic Union. But it was destroyed, as 5,000 of its members and supporters were killed off by far-right paramilitary groups and the security forces.

Between 1999 and 2002, under Conservative President Andrés Pastrana (1998-2002), a 42,000 square km demilitarised zone was created in El Caguán, for peace talks between the government and the FARC.

But the only real advance made by the talks was a humanitarian exchange of hostages held by the FARC for imprisoned guerrillas.

After the talks broke off, Marulanda never again appeared before the cameras, and it was rumoured that he was in bad health.

“It is sad news…He was an important figure, which is not recognised by those who fan the flames of class hatred,” the secretary general of Colombia’s Communist Party, Jaime Caycedo, told IPS.

“He was important because of his trajectory, background and agrarian traditions against the oligarchy. It is also significant that he died of natural causes,” he added.

Iván Cepeda, head of the Movement of Victims of Crimes of the State, told IPS that “it cannot be denied that he was a historic leader.”

But he also expressed his hope that “this will represent a shift in course by the FARC, and that a priority will be put on negotiations that would lead to the release of the hostages” held in remote jungle camps by the rebel group.

“We must not see Marulanda’s death in terms of a ‘before’ and ‘after’,” Luis Eduardo Celis, of the Bogotá think tank Corporación Nuevo Arco Iris, told IPS from the town of El Retorno in the southern province of Guaviare.

The new head of the FARC secretariat, Cano, “represents a long-expected succession, because he has a more intellectual background and can serve as a bridge between Marulanda’s generation of peasant fighters and the younger, more urban, university-educated generation,” he said.

“He has the complete support of the FARC, and his leadership does not come as a surprise to anyone,” commented Celis, who was in Guaviare to attend the National Forum for Reconciliation in Colombia, along with 400 other delegates from around the country.

The FARC represents the Colombia “of the poor, marginalised coca farmer, and he (Cano) is very familiar with the movement, to which he has dedicated more than half his life. He has lived and worked alongside all of the FARC’s commanders, so I foresee a very smooth transition,” he added.

Under his leadership, “there will be no significant changes. This is a very reclusive, meticulous and conservative guerrilla group, which is engaged in a trial of political and military strength with (rightwing) President Álvaro Uribe, something that is not going to change,” Celis predicted.

Changes could come “if the political scenario is modified, for example, if a humanitarian hostage-prisoner swap is achieved,” said Celis, a former non-combatant member of the National Liberation Army (ELN), Colombia’s second-largest insurgent group.

But Uribe “has dug in his heels against an agreement,” he said. “The government’s aim is to defeat the FARC militarily, to force them into an armistice.”

Cano, 62, studied anthropology at the National University of Colombia and was a leader of the Communist Youth before joining the FARC. He led failed peace talks in Caracas, in 1991, and in Tlaxcala, Mexico in 1992.

The collapse of the talks in Mexico gave rise to a dispute within the secretariat, in which Reyes’ position of refusing to engage in further negotiations outside of Colombia reportedly won out.

Cano is the founder of the Bolivarian Movement, FARC’s clandestine political wing.

He is now apparently somewhere between the central province of Tolima and the southwest province of Valle del Cauca, an area besieged for months by 8,000 military troops.

But “we are talking about huge areas, of 40,000 or 50,000 square km,” said Celis. “This is a peasant army that moves around calmly and easily within that area. They’ve been there for 50 or 60 years, they aren’t improvising.”

Despite the recent loss of several members of the ruling secretariat, “a military defeat of the FARC does not lie just around the corner,” said Celis.

He estimates that the group currently has 10,000 combatants, having lost a similar number – “mainly the youngest, those who were recruited between 1998 and 2000” – over the last six years, to death, desertion or capture.

“The army has made important, but not strategic, advances. But if Uribe ends up in office for a third term (for which a constitutional reform would be necessary), the FARC would definitely find itself in a complicated position, because the guerrillas are not capable of returning to their previous military strength,” he said.

Continuing to wage war until a total defeat “would be a very bloody route to take. Defeat would also mean the end of a social and community network” that supports the FARC.

POLITICAL ACTIVITY AT A STANDSTILL

Another question is the group’s current lack of political initiative. “The FARC no longer presents proposals to the country,” said Celis.

The director of the Institute of Studies for Development and Peace (INDEPAZ), Camilo González Posso, said Saturday at the National Forum for Reconciliation, in Guaviare, that “major rectifications are needed on the part of the FARC.”

“This policy of seeking a humanitarian hostage-prisoner exchange has even silenced the FARC itself, because the group has suspended its political discourse while pressing for an agreement,” added the former government minister.

“Get into politics, we know you are politicians, engage in politics, don’t wander around the world asking for your status (as a terrorist group) to be changed; change it by getting involved in politics,” he urged the guerrillas.

But Uribe must also rectify his position, and move “from humanitarian rhetoric to practice,” because the country “does not deserve an escalation of the conflict within its borders as a result of the failure to reach a humanitarian accord on the hostages,” said González Posso.

For his part, Celis said “there is a great deal of space for negotiating. Of course they (the guerrillas) have very big aspirations, which are out of line with their real capacity, but there is a possibility for discussing change.”

In Bogotá, meanwhile, Cepeda said “we hope that under the new FARC leader, a political approach will prevail over a military focus.”

*With additional reporting by Constanza Vieira (from El Retorno) and Helda Martínez (Bogotá).