KAMPALA, Sep 23 2008 (IPS) - Producing baskets and mats in central Uganda has traditionally been women’s work. Women made these items for use in homes. The National Association of Women Organisations in Uganda (NAWOU) has changed this practice into a powerful force fighting poverty. 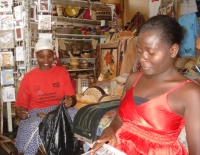 The organisation has a big crafts collection centre in the east African country’s capital of Kampala. Baskets, toys, mats and hand-made cotton cloth can be found there, among other things. The collection centre operates according to fair trade principles and is affiliated to the International Fair Trade Association (IFAT).

IFAT is a global network of organisations seeking to improve the livelihoods of ‘‘disadvantaged’’ producers by linking up fair trade organisations and advocating justice in global trade.

Most of the crafts are sold in the U.S., with some exports going to Australia, New Zealand, Spain and the UK.

According to Pamela Kyagera, marketing officer at the collection centre, fair trade has not only turned around the trade in crafts in Uganda but have ensured that women artisans benefit equally from their work.

‘‘I strongly believe we can go a long way in fighting poverty through fair trade. The women you see bringing the crafts would never make it through conventional markets.

‘‘They would not sell through markets which are far from their homes. They would not have enough information and they would get exploited,’’ she argues.

The majority of the women artisans working for NAWOU have used their earnings to improve their livelihoods and that of their family members.

IPS spoke to a few of the artisans. Joyce Nakazi, a widow and mother of three children, is one of the regular suppliers of baskets to NAWOU collection centre. She is also disabled, having lost her left eye in an accident. Her husband died in 1998, leaving behind a rented house some distance from Kampala.

‘‘I have benefited a lot from the sale of the baskets because I managed to build a house from my savings. I also paid for education for my eldest son, who qualified to join the university. I used to work as an attendant at a nursery school near our church but the money was not enough. So I quit to rather make baskets,’’ Nakazi tells IPS.

Daisy Nanteza has been supplying crafts at the collection centre since 1997. Her late husband had two wives. They were all staying on the same piece of land. When her husband died in 2006, she was left homeless. She had some savings from basket sales which she used to buy her own piece of land.

‘‘Living as a single mother and educating children here is not easy. But I have managed it by selling crafts. I make up to 100,000 shillings a month (about 60 dollars),’’ says Nanteza.

At the collection centre, Zaida Zizinga tells IPS: ‘‘I use the money from crafts to help my husband, who is a mechanic, to pay school fees for our children. He would not mange alone, given his small earnings from repairing motorcycles.’’

Kyagera has worked with 70 women groups in various parts of Uganda to train them on quality requirements.

She can identify a poorly made craft by mere sight: ‘‘It hasn’t been easy to teach women to understand the quality requirements but over the years they have learnt. And, of course, we have had to teach our consumers to understand some variations because these crafts are made by human beings,’’ Kyagera explains.

But there remain challenges.

‘‘The biggest challenge has been building the capacity of women. It is not easy to grow the numbers. As you train more and more women, issues like HIV/AIDS come up. Many of our women have been affected by HIV/AIDS. Some die or some get old and can no longer make baskets. The young ones are not interested in making baskets.’’

Kyagera’s main disappointment is that many Ugandans don’t want to buy the crafts: ‘‘They always complain that the prices are too high. Sometimes we have to buy the crafts from the women to keep them in business – even when we have no orders from our partners abroad.’’

The baskets are made from banana fibres and leaves, which means the artisans don’t have to spend money on raw materials. The products are environmentally friendly because most of the materials are collected when crops are being pruned or harvested.

Uganda Crafts 2000 Ltd is another shop in Kampala that operates on principles of fair trade, employing specifically ‘‘widows, the youth, disabled and people living with HIV/AIDS’’, according to its website.

It is affiliated to both IFAT and Cooperation for Fair Trade in Africa (COFTA). COFTA is a network of organisations working with, its website says, ‘‘disadvantaged grassroots producers to eliminate poverty through fair trade’’.

One of their workers, Sanyu Rose, is a disabled single mother with three children. She told IPS that, ‘‘what I understand about fair trade is that you don’t exploit the artisans because you have to ensure that both sides gain.

‘‘We have benefited from fair trade because we get a higher price, compared to the price in shops not operating under fair trade principles.’’