GENEVA, Oct 20 2008 (IPS) - The Doha Round was launched in 2001 in Doha, Qatar, to provide a developmental dimension to global trade by enabling developing and least developed countries to secure enhanced access for their products in rich country markets. However, there is a pronounced shift in the negotiations in the last seven years – from developmental issues to the purely market-driven concerns of the dominant players. 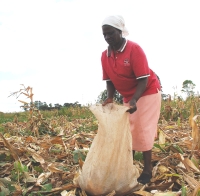 Small-scale farmers like Zimbabwean Ruth Chikweya will be hit hard if the Doha Round does not ensure safeguards against import surges. Credit: Tonderai Kwidini/IPS

The coordinators for the African, Caribbean and Pacific (ACP) group, the least developed countries (LDC) group and the Africa group are all concerned about sustained attempts to undermine the developmental components in agriculture and cotton subsidies.

The U.S., the European Union (EU), Canada and other industrialised countries are demanding a hefty payment from their developing country counterparts for the reforms they have to undertake in their agriculture. That shift led to the collapse of Doha trade talks time and again, several analysts said.

Along with Japan, Canada, Norway and Switzerland, the U.S. and the EU have repeatedly maintained that they must secure a high level of access for their industrial products in developing countries as ‘‘payment’’ for their commitment to reduce the distortions they are causing in the global farm trade.

‘‘What we are seeing now at this point is an aggressive push to lower the ambition on the developmental side with developed countries demanding special and differential treatment to protect their interests,’’ said Servansing, the ACP coordinator.

The ACP, the Africa group and the LDC group are pushing hard for simple and flexible rules for special products and a special safeguard mechanism (SSM) to protect their resource-poor subsistence farmers. These three groups have joined ranks with the G-33 coalition led by Indonesia which is demanding easy conditions to use the SSM mechanism to face unforeseen surges in imports of major food items.

The ACP wants a ‘‘special safeguard mechanism (SSM) to protect our farmers from unforeseen import surges; the reduction of cotton subsidies; and a proper mechanism to address the erosion of preferences'', explained Servansing.

But the U.S., Australia and Uruguay ''are demanding tough and burdensome conditionalities that would make these provisions redundant,'' he maintained.

The U.S., along with Australia, Canada and other farming exporting countries, want a set of tough rules for the SSM to ensure that it does not affect the normal trade in farm products. These rules suggest a high trigger for imposing special safeguard duties and low remedies with limited duration.

In July this year, the talks broke down on SSM, among other issues, when India and China refused to accept the stringent conditions demanded by the U.S..

Subsequently, there were attempts to renew these talks but there has been no progress as the leading farming exporters are not budging from their tough conditions. Recently, Indian trade minister Kamal Nath told the WTO director general Pascal Lamy that developing countries will never accept a SSM that is overly burdened with various cross-check conditions.

‘‘SSM is a very important issue for the African countries,’’ said Gauze, arguing that ‘‘we don't want an SSM that cannot preserve our agriculture and rural development’’.

Apart from the SSM, there is complete silence on how cotton – one of the boiling issues on the Doha agenda and the most important demand for the four West African cotton producers (Benin, Burkina Faso, Mali and Chad) – is going to be addressed in coming days. This is due to the U.S.'s decision not to come up with an alternative to what the chair for the Doha agriculture negotiations, Ambassador Crawford Falconer, had suggested.

The chair indicated in his last draft text issued in the month of July that cotton subsidies should be reduced over 80 percent, a suggestion that was rejected by the U.S.. ‘‘Nothing is happening on cotton and we are worried,’’ said Servansing, while Lesotho's trade envoy Maruping warned that without an early outcome on cotton, the negotiations will not progress well. In a nutshell, the African countries are eager to conclude the Doha modalities agreement by the end of this year but they continue to face several hurdles to their developmental demands. ‘‘We are fighting a lot on these issues and it is important that they are addressed adequately,’’ said Gauze.

Oxfam, the developmental pressure group, cautioned the African countries about rushing into an agreement without addressing their concerns on special farm products and the special safeguard mechanism. ‘‘We don't see the need to conclude the modalities agreement if the developmental issues in agriculture, that are most important for African countries, are not sufficiently addressed,’’ Isabel Mazzei, head of Oxfam in Geneva, told IPS.

*This is the second in a two-part series of articles.