WASHINGTON, Jun 15 2009 (IPS) - As protests over Friday's disputed election continue to rage in Iran, the U.S. has thus far reacted cautiously, reflecting the high degree of uncertainty in Washington both about how much support to give the demonstrators and about the implications of the escalating crisis for President Barack Obama's hopes of engaging Tehran in serious negotiations. 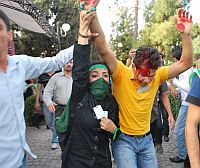 Although many anti-Iran hardliners here are calling for Barack Obama to make an unequivocal show of solidarity with Iran's anti-government protesters – including imposing new economic sanctions against the Islamic Republic – his administration has so far declined to express outright support for the protesters against President Mahmoud Ahmadinejad and his backers.

This course of action, many analysts say, reflects a political reality in which strong U.S. backing for the protesters might prove to be more of a curse than a blessing, since it could allow the Iranian regime to portray the protesters as agents of a hostile power and thus legitimise their repression.

"This is an issue that is going to be fought by Iranians; there's nothing to be gained by external forces coming into this or trying to influence the outcome," said Gary Sick, a veteran Iran analyst at Columbia University who also served on the National Security Councils of former Presidents Gerald Ford, Jimmy Carter and Ronald Reagan.

"That would be a terrible mistake, and no matter what was said or done by the administration, it would be interpreted as intervention and would actually undercut severely the position of the reformists as they would be tagged as 'tools of the West,'" he said in an interview Monday with the Council on Foreign Relations.

But the upheaval in Iran nonetheless poses an additional hurdle for the Obama administration's attempt to engage the Islamic Republic diplomatically regarding its nuclear programme.

While it is not clear that the election and its aftermath alter the basic strategic calculus on the nuclear issue – a central issue in Obama's engagement strategy – they almost certainly will alter the political balance of power here, by bolstering anti-Iran hawks and undercutting domestic support for engagement.

"Even more importantly, this also would likely eat into Congressional support for U.S.- Iranian dialogue," he wrote.

Already, many hawks have seized upon the disputed election – and the widespread belief that the results were fraudulent – as proof that Iran's leadership is too aggressive and unreliable to be engaged.

"The vote should prompt Mr. Obama to rethink his pursuit of a grand nuclear bargain with Iran, though early indications suggest he plans to try anyway," the Wall Street Journal’s neo-conservative editorial page complained Monday.

The Journal suggested that Obama should send a message by "remov[ing] his opposition" to pending legislation that would impose sanctions on companies exporting refined petroleum products to Iran.

Meanwhile, independent Democratic Senator Joseph Lieberman, who is widely regarded as a neo-conservative on foreign policy issues, called on the administration to "speak out, loudly and clearly, about what is happening in Iran right now, and unambiguously express their solidarity" with the protesters.

With the situation in Iran in continued flux, however, most observers in Washington, including the administration itself, are taking a "wait-and-see" approach for the moment.

It remains unclear how much support the protesters have, whether a formal review by the regime's Guardian Council ordered Monday by Khamenei of the election results may yet alter the official outcome – or whether the election was, in fact, stolen in the first place.

On Monday evening, Obama told reporters that he was "deeply troubled by the violence that I've been seeing on television", while offering reassurances that "it is up to Iranians to make decisions about who Iran's leaders will be" and that the U.S. "respect[s] Iranian sovereignty".

Obama also pledged to continue his engagement strategy regardless of the election results.

"I’ve always believed that as odious as I consider some of President Ahmadinejad’s statements, as deep as the differences that exist between the United States and Iran on a range of core issues, that the use of tough, hard-headed diplomacy – diplomacy with no illusions about Iran and the nature of the differences between our two countries – is critical when it comes to pursuing a core set of our national security interests", he said.

That assessment appears for now to reflect the majority view, at least among Iran specialists and most of the foreign-policy establishment here.

"I think that the diplomatic outreach should continue as it started," wrote F. Gregory Gause, a Gulf specialist at the University of Vermont, at the Foreign Policy website. "American interests here are not about Iranian domestic politics. They are about Iran's role in Iraq, Afghanistan, the Gulf, the Arab-Israeli arena, and the nuclear programme."

"America deals with all sorts of governments whose domestic arrangements are, to put it mildly, less than compatible with American ideals. (The Saudis are Exhibit A)," Gause added.

But even some realists who have strongly supported engagement have said that the regime's behaviour in the last few days has given them pause.

"Washington now faces a newly fractured Iranian polity ruled by a leadership that is willing to jettison its own institutions and legitimacy in its determination to retain absolute control," according to Suzanne Maloney, a senior fellow at the Brookings Institution and former State Department Iran specialist who still backs diplomacy.

"That does not bode well for Iran's capacity to undertake serious talks and eventually engage in historic concessions on its nuclear programme and support for terrorism," she said.

White, another consistent engagement backer, also suggested that the continued silence of Obama and other western leaders carried risks of its own.

The failure to speak out "is sending [an] unfortunate signal, especially to the many protesters evidently disappointed that the international community has remained so silent, [and] giving the impression that… it probably will be business as usual with Tehran once the dust has settled."

"[T]here is every reason to believe… that at the end of these unpleasant events, Ahmadinejad will be president and Iranian hardliners in power perhaps more confident and brazen in their behaviour than before," White wrote Monday.

Meanwhile, neo-conservative hardliners here have taken the election crisis – and the internal conflicts within the regime that it exposed – as an opportunity to press their own nightmare scenarios.

"The danger… is that if the regime ever collapses under its own weight, the ideologues who would have custody over the nuclear programme might decide to launch, figuring both that they're not long for the world anyway and so have nothing to lose," Michael Rubin of the American Enterprise Institute (AEI) told National Review Online.

*Jim Lobe's blog on U.S. foreign policy can be read at http://www.ips.org/blog/jimlobe/