CAPE TOWN, Jul 20 2009 (IPS) - Health experts and scientists have accused the world's wealthiest countries of abandoning the goal of universal access to HIV prevention, care and treatment by 2010. 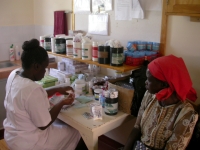 Kenyan nurse preparing ARVs for a patient in Kenya: drug shortages and interruption of treatment are just some of the negative consequences of a funding shortfall. Credit: John Nyaga/IRIN

"We must hold the G8 leaders accountable for their failure to deliver on their promises," said Julio Montaner, president of the International Aids Society (IAS), opening the Fifth IAS Conference on Pathogenesis, Diagnosis and Treatment in Cape Town.

Montaner, who is also director of the British Columbia Centre for Excellence in HIV/AIDS, was sharply critical of the world's most powerful industrialised countries, who in 2005 committed to developing a comprehensive response to the AIDS pandemic that would achieve universal access to treatment by next year.

A joint report by UNAIDS and the Kaiser Family Foundation – a non-profit foundation focused on health issues – released earlier this month showed that more money was spent fighting HIV/AIDS in low- and middle-income countries in 2008 than ever before: $8.7 billion was committed, $7.7 billion was actually disbursed. But this was still barely half of the amount that UNAIDS estimates is needed.

The worldwide economic downturnn is expected to sharply affect funding for health. A World Bank report, titled "Averting a Human Crisis During the Global Downturn", predicted drug shortages and interrupted treatment regimes. According to the report, eastern and southern Africa will likely suffer most: this is both where the HIV epidemic is at its worst and where programmes to fight it are most heavily dependent on donors.

"Social services are likely to suffer as governments cut back on spending, currencies devalue, and external aid donors come under pressure to maintain existing levels of foreign assistance. The downturn has taken a wrecking ball to the growth and development gains of the world's poorest countries," said Joy Phumaphi, the World Bank's vice-president for human development, in the report.

"Earlier this month, another G8 Summit came and went. HIV/AIDS was indeed the elephant in the room," said Montaner. "In 2009, the eight most powerful economies in the world left HIV off their priority agenda. They departed with no progress report on HIV, and they even failed to renew their prior commitment to the goal of universal access to HIV prevention, care and treatment by 2010. This is totally unacceptable."

"We need (to take) global responsability for health and universal access now. G8 countries committed financial support towards achieving universal access by 2010. (They have) already broken their promises and African states are not meeting their targets," she said.

"African member states met in Abuja and declared commitment to fight HIV and clear targets on how they will fight HIV/TB and Malaria. We know that the whole world is facing economic challenges and we want to remind the world leaders that health is not in recession therefore economic recovery must include health recovery."

The biennial IAS conference runs from Jul. 19 to 22 in Cape Town, South Africa. Around 5,000 scientists, clinicians, community leaders and public health experts will consider how scientific advances can practically shape the global response to HIV/AIDS.