PORT-LOUIS, Sep 9 2009 (IPS) - Every year 400 Mauritians undergo amputations, another 400 have heart surgery; 175 people’s eyes are under the knife every week – all due to a disease that is easily prevented, Type 2 diabetes. 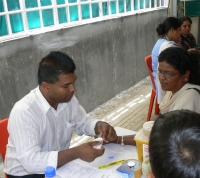 “It seems that the whole population is ill,” lamented Mauritius’ health minister.

Mauritians’ health is seriously threatened by a disease that could easily be avoided with good nutrition and exercise, health experts say. A quarter of the 1.2 million population is suffering from diabetes, while almost 30 percent more are pre-diabetic. Many others are unaware of their condition, according to a new study by the national health department.

Almost all diabetes patients of the island state suffer from Type 2 diabetes, a metabolism disorder where the body struggles to break down glucose. Type 2 diabetes is mainly caused by unhealthy lifestyle choices, in contrast to type 1 diabetes – which accounts for less than one percent suffer of cases in Mauritius – in which a person’s own body has destroyed the insulin-producing beta cells in the pancreas.

Fifty-six-year-old Naden Sooprayen has been suffering from Type 2 diabetes for the past 16 years. He says did not know about the disease until he was diagnosed.

“I am living on diabetes pills since all these years, and I don’t think I’ll ever stop taking them because doctors say I may get serious health complications,” he explains, referring to the medication that helps him to control his blood glucose levels.

“Had I been aware of the damages caused by this disease, and that healthy foods, vegetables and physical activities can prevent it, I would have gone for them,” says Sooprayen, who works as a messenger at a publishing company in Mauritius’ capital Port-Louis.

Sooprayen is one of about 300,000 Mauritians who suffer from this disease, according to the National Service Framework for Diabetes (NSFD), which was set up this year by government in a concerted effort to fight the disease.

NSFD figures paint a dismal picture of Mauritians’ health: 30 percent of Mauritians are hypertensive, 38 percent are either overweight or obese, 45 percent have high cholesterol, and 75 percent of men and 90 percent of women are not physically active. Rapid economic development during the 1990s has led to unhealthy changes in the lifestyle.

Health minister Rajesh Jeetah told journalists at a press conference in August 2008 that thousands of diabetics are suffering from serious eye and kidney conditions caused by the disease, and many require hospitalisation.

Health experts note that the high rate of diabetes among Mauritians is not caused by leading unhealthy lifestyles alone. They believe that the Asian genetic background of the population might as well play a role.

During a presentation to the health department in August, Dr Jeremy Jowett, head of genomics and system biology at the Australian Heart and Diabetes Institute, confirmed that Asian populations suffer most from the disease. About 80 percent of the Mauritian population is of Asian descent.

The Mauritian government has now commissioned research to better understand the genetic reasons that cause diabetes.

Health officials are concerned that prevalence of diabetes will remain high because there is not enough awareness among the population about the seriousness of the disease. Dr Mahboob Kureemun, a private medical doctor, told IPS that most new cases of diabetes are only discovered when a patient requires a medical check-up for other ailments.

He is also worried that many diabetics, once diagnosed and put on treatment, do not take their medication consistently and don’t make any lifestyle changes.

“Many diabetics take their pills only a day or two before their next doctor’s appointment instead of every day, (hoping to improve the results of the blood test). This makes control of the disease really difficult,” he observes.

Believing that the health department cannot solve the issue alone, government officials have now enlisted the support of the private sector and civil society organisations in the fight against this disease.

The Holy Welfare Association, for example, is a non-governmental organisation that educates young diabetics under the age of 35 about healthy lifestyle choices, nutrition and the importance of sport.

Moreover, government is encouraging the local media to regularly broadcast talk shows and give out information on diabetes and other non-communicable diseases regularly, while public health facilities now offer free medical check-ups almost everywhere on the island.

A number of health clubs and support groups have been formed to help diabetics deal with the disease on a day-to-day basis and to counsel patients on how to lead a healthier lifestyle.

In a bid to protect the younger generations from this disease, the sale of soft drinks, sugar candies and salty snacks, loaded with fat, in school canteens has been banned by the education department.