LIMA, Dec 2 2009 (IPS) - In Peru, 51 percent of all jobs are generated by the informal economy, a sector that has a female face, as more than 60 percent of the women workers in the country are forced into informality, with only 15 percent having health coverage and a mere four percent enjoying retirement benefits. 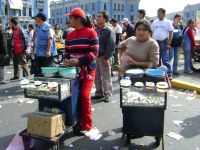 These figures are provided by the International Labour Organisation (ILO), whose gender issues coordinator for the Andean sub-region, María Bastidas, explained to IPS that women in the informal sector are concentrated in the self-employed and micro-enterprise segment – working as street vendors or at home – or as temporary agricultural labourers, domestic workers, or doing unpaid work in the family home.

Bastidas – who is also president of the NGO Community Development Association, and in May 2008 published a study on the subject entitled “Informal Women Workers in Peru” – said that the leading reasons for the predominant presence of women in the informal economy is the gap between labour laws and actual working conditions, the shortage of formal employment, the low levels of investment, and the lingering effects of the crises of the 1980s and 1990s, which prompted the emergence of so-called “survival economies.”

This is compounded by the constant flow of rural migrants into the cities and a cultural and educational problem that prevents women from participating fully in modern economic activities, said this expert with the ILO, whose Latin American regional headquarters are located in the Peruvian capital.

This South American country has had longs periods without significant investment in production and, consequently, a negligible demand for new workers, while during times of increased investment, formal employment did not accompany that growth, due to the type of activities that attracted capital.

The negative impacts of this structural model were aggravated in the 1980s with an economic crisis that left tens of thousands of workers out of a job, forced many companies to close down and pushed more and more Peruvians into informal labour.

Peru, a country of 28.7 million people, has an economically active population of 10.6 million, 35.4 percent of which are women, according to the latest figures.

“Twenty years ago, I was working at a hospital, but I had two little girls and nobody to leave them with. So I had to quit and because of my two kids, I couldn’t even find work as a domestic,” Gloria Solórzano, in charge of women’s issues at the Unified Workers’ Confederation (CUT), told IPS.

“Now I say proudly that I’m a street vendor: I’ve been working for 15 years in La Victoria, outside the wholesale market” in Lima, she said.

“Because they have a larger share of family responsibilities, it’s not easy for women to find employment. Which is why they turn to informal work. They pick through trash, drive a taxi or motorcycle taxi, or do all sort of odd jobs, and they work as domestics,” the trade unionist said.

One of the informal occupations is as street vendors, where women of all ages work, she said – from elderly women to young mothers working with their children at their sides. “They’re not in the street because they like it. There’s just no work and they have to feed their children and give them an education,” Solórzano said.

For Solórzano, it is essential to raise public awareness – in society, the government, the media and state and non-governmental organisations – about the urgent changes that need to be made in the labour market if the country truly aims to guarantee decent work.

“The government must act firmly to create more jobs, but not just any jobs – decent jobs,” she underlined, suggesting that this may only be possible with a new constitution, because the one in force, inherited from the rightwing government of Alberto Fujimori (1990-2000), is a barrier to changes in the labour market.

Besides the lack of jobs, women are also turning to informal labour because many companies force them to work 12-hour or even longer days, and they often pay less than minimum wage. In the informal sector, women have more opportunities and greater flexibility to reconcile work and family responsibilities.

“If their labour rights were respected, many of us women would choose to work in the formal sector. But even if we did want a formal job, there aren’t any, because this country has violated labour laws, which are ignored,” Solórzano said.

A study by the Inter-American Development Bank (IADB) released in October backs Solórzano’s position: in Peru the wage gap between men and women of the same age and identical educational level stands at 19.4 percent, more than two percentage points above the Latin American average of 17.2 percent.

“Decent work for women doesn’t exist, and this is especially true in Peru. Women’s work is invisible, they still think we don’t exist as workers,” Solórzano said.

The CUT leader said formalising informality also requires training so that women can establish small enterprises and obtain support to market their products.

According to economist Edgar Galván, former general director of the Production Ministry’s Bureau of SMEs and Cooperatives, “more and more women are heading SMEs, because they have the right characteristics, such as management skills and creditworthiness. Women have an edge that gives them greater access to micro-loans.”

He said that 70 percent of Peru’s SMEs are informal and, as a result, the sector has the same percentage of informality in employment. These are companies with a great number of unpaid family workers, most of them women.

SMEs headed by women are concentrated in the services and commerce sectors (60 percent), and there are few in transformation and industry sectors.

According to Galván, it is vital to train the women who head these economic units so that they can turn them into real businesses, because they weren’t conceived as a business opportunity, but rather as a way to save their families from hunger.

“They’re a response to the lack of formal jobs, but they also evidence a problem in our education, because we’re educated to become employees, not businesspersons; that’s why we lack business savvy,” Galván said.

“Women who are entrepreneurs or direct SMEs have to realise that they need to open up spaces for training and technical assistance, and become more business savvy,” she concluded.

From dominated to leaders

If there’s a female-dominated economic sector in Peru, that’s the informal trade sector, 80 percent of which is in the hands of women. Although there’s a great variety of women working in this sector, the majority of them are heads of household, regardless of their age or marital status.

This discovery led Solórzano six years ago to get together with 11 other women vendors from various districts of Lima and form a Network of Women Street Vendors, which includes traders who sell their wares in city markets, bus stops and country fairs.

Today, it has spawned 16 different networks in the capital and surrounding areas, and another four in different provinces outside the capital. And it’s still growing.

The network began in Lima’s industrial district, and some of the members started to lead the area’s labour associations. One of these women is Rita Maguiña, who is currently president of the confederation of street vendors and the Network’s organisation secretary.

“I didn’t set out to become a leader, but when I saw how women were harassed by authorities and even by union leaders, I decided to get involved, give my support and change things. I said to myself, if women are the majority, then, why is it that men are in charge?” Solórzano said.

“Our conscience leads us to want to change the way things are. There are so many women selling in the streets that I know I need to fight for change in this country. Not for us – who may not live to see it – but for our children,” she said.

“Behind every woman there’s a home. We want to have a home with a decent job, a home where our children can grow up in peace, for our country’s future. We need to do something to end hunger in this country,” Solórzano said.