NAMIBIA: “If You Kiss for Five Minutes You Get It”

WINDHOEK, Mar 16 2010 (IPS) - “At home we have a bar,” says grade seven learner David Bravo* (14). “When my mother puts on the music I cannot concentrate on (my) schoolwork anymore. Sometimes, in the middle of the night, I just sit there and watch the people.” 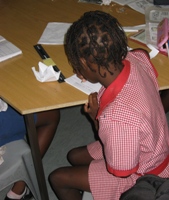 Bravo is one the learners who attends the AIDS Care Trust’s (ACT) after-school programme in Katutura township near Windhoek. The project helps children infected with HIV or affected by the disease. But Bravo hates to talk about that. “I don’t want to know whether my mom has AIDS.”

He shakes his head and instead he launches into a cautionary tale that he picked up during the programme’s life skills class.

“There are many ways to get AIDS. If you have unprotected sex, touch a brother’s wound, or even if you kiss someone for more than five minutes,” he says. “It’s really a bad disease. People with AIDS should keep it to themselves.”

Inside the dimly lit community hall that hosts the project, some 150 children are bent over their books at tables scattered throughout the auditorium. There are groups of learners on the balcony and even on the main stage. The bright blue of their school uniforms contrasts sharply with the grey linoleum of the floors and the washed out wooden panelling on the walls.

For most it is the only chance to get their school work done. Like Bravo, many learners are several grades behind.

“Most parents who are infected with HIV are too sick to support their children any longer. They don’t encourage them to do well in school, often they don’t have money to buy books, uniforms or even food,” says supervisor Frans Sakaria. “For children who are HIV-positive school can be a hard place because the teachers are not sensitive to their situation, they don’t watch their language.”

The after-school programme – the only one in the region catering for primary school learners – started in 2008 with 45 children and is set to have 300 children by the end of 2010. But the challenges are enormous.

“Just to hire the buses (to transport the children) from the municipality costs N$30,000 (4,000 dollars) per month, or two-thirds of the programme’s total costs,” says ACT’s youth programme co-ordinator Loide Velishavo.

Meanwhile, assistance from the ministry of health, social services and the municipality is non-existent.

“We used to cook the children’s lunch on the ministry’s premises, but they don’t want to pay for (the) electricity anymore,” says nutritional manager Tuisnerde Jonathan. “So we have to go cook in someone’s house now.” Despite this, the programme is a safe haven for the children.

“I like it that I can be here without being beaten (up),” says thirteen-year old Fransesca Boois*. “They also help us with our homework and feed us.”

After her first life skills lesson last week she knows she ‘should not drink, smoke or take boyfriends at this age.’ Boois and her sisters live in an orphanage, after they were removed from the care of their abusive dad. She only saw her mother once after she left home to live and work in the capital, Windhoek.

“It was 2006, at the funeral of my granny. Mum had sores on her hands, but she never told (us) what was wrong. Only after she died a year later, our aunt said it was AIDS.”

After a long silence she continues: “I just hope I don’t get that disease and suffer.”

Maria Moses* (15) has no such hopes. Four years ago she was diagnosed HIV-positive. “I now often walk the ten kilometres to the hospital by myself to pick up my medication. On those days I miss school,” she tells IPS.

Not that school is something Moses looks forward to. “I have to walk an hour and a half to get there and if I don’t do my homework the teacher will beat me. So I like that the programme helps us with our studies and even pays our school fees. They remember the times that we have to take our medicine and they are faithful to us. I feel accepted there.”

Every Thursday the children get life skills lessons from Katrina Jonas. “AIDS is very broad and complicated and we don’t want to confuse the kids, nor single out those that are infected. But we do teach them the importance of keeping clean, doing their homework, exercising and abstaining from alcohol. On a one-on-one basis we provide counselling. Many children struggle with questions around the disease and few get answers at home.”

Velishavo explains some of the responses the children get when they ask about HIV/AIDS: “A guardian will for instance say: ‘It’s not me who killed your parents. Go to your mother’s grave and ask her’.”

For many HIV-positive children the disease cuts them off from forming relationships with their peers, she says.

“If you ask (them) why, the answer always is: ‘Because I am dead’,” Velishavo says.

Michael Shindeba* (11) knows something about hiding his status. “I do play well with my friends but…it’s because they don’t know,” his words trail off in an inaudible whisper.

Shindeba is HIV-positive. He found out his status three years ago when he was eight.

He lives with his mum in an iron corrugated shack, without running water or electricity. And his dreams of becoming a doctor remain undiminished, even after his diagnosis.

“The programme is the best place to study, I am always studying,” he says with a seriousness that defies his age. “But we also have a lot of fun, so I feel nothing about the disease.”

*All names of learners are changed