GABORONE, May 29 2010 (IPS) - The welcome end to wars in the upper reaches of the Okavango River brings new pressures for development and the risk of unwelcome changes to the health of the river. A joint commission to manage the basin is developing tools to avoid this. 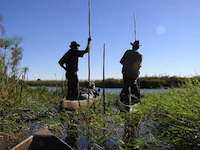 The Okavango is best known for the rich wetlands of its inland delta in Botswana’s Kalahari desert. The delta is protected as a valuable site for conservation and tourism in Botswana, but the same is not true for the river as it rises in Angola and flows through Namibia.

Population and development along the Okavango River were long held in check by Namibia’s war of liberation from apartheid South Africa, and decades of civil war in Angola.

Since Namibia’s independence in 1990, several proposals for water use ranging from dams for irrigation and power generation to a canal to transport water to distant urban centres threatened by drought have been put forward. And as Angola’s oil-rich government turns its attention to rural development, it’s likely that other ambitious projects will be put on the table.

The three countries established the Permanent Okavango River Basin Commission (OKACOM) in 1994, charged with working out the safe long-term yield of the basin and laying out criteria for fair allocation and sustainable use of the water.

The completion of a Transboundary Diagnostic Analysis (TDA), presented at OKACOM’s annual meeting in Gaborone on May 27, is an important milestone towards developing a strategic plan for the river basin.

The TDA is a careful scientific and technical assessment of the Okavango – looking at water quantity and quality, the characteristics of ecosystems all along the river, as well as the needs and nature of the communities, politics and institutions the river connects.

Dr Jackie King, a consultant from Cape Town-based research firm Water Matters, explained that if the effects of development along the river are clearly articulated by water managers, engineers and economists, it will enable decision-makers to better understand, for example, how a dam might supply water for irrigation and generate electric power, while altering seasonal flows and harming breeding of important animal species in a downstream wetland.

“We may lose a whole series of ecosystem services like fisheries. We may lose functions of the wetlands like purification of water and we lose the income that people along the river gained,” King said.

In preparing the analysis of the Okavango, several water resource scenarios were developed, with OKACOM identifying specific irrigation, hydroelericity and water abstraction projects. The decision was taken not to approach planning from the viewpoint of maximising one sector or another, but of presenting development scenarios of low, medium and high water use.

King said the frequently poor soils found in the Okavango Basin might suggest that removing large volumes of water for irrigated agriculture was not optimal use of the resource.

Another concern that establishing more extensive agriculture in the Okavango’s catchment area raises is the risk of fertiliser running into the river – if additional nutrient runoff reached the delta, the papyrus reeds that are a dynamic part of the delta’s constantly shifting channels could grow far more rapidly, choking off huge sections.

A dam, even if it were operated to mimic the seasonal flow of water, would prevent sediment from reaching the Delta; without the many thousands of tonnes of sand carried into the Delta each year, wetland channels would tend to become deeper and faster, rather than silting up to create habitat for birds and aquatic life.

“The proposal looked at the basin a whole on where the best places for investment within the basin for best profits and appropriate markets,” Rajapakse explained. EPSMO – funded by the Global Environment Facility in support of OKACOM – was responsible for the TDA.

“OKACOM will establish an accurate monitoring system. Right now there are huge gaps in the monitoring of the information and systems will have to established (to monitor) river sediment and assess of ground water,” he said.

Opportunities for river-friendly wealth creation would have to be identified for communities. This would include developing and executing a programme to promote a basin-wide tourism product, improved livelihoods through sustainable agriculture, a pilot project to demonstrate best practices in livestock management, and training to help maintain sustainable fisheries and expand aquaculture production.