JOHANNESBURG, Jun 16 2010 (IPS) - Operation Amani Leo, launched jointly by MONUC (the United Nations Mission in Congo) and FARDC (the Congolese army) in January to regain control of mining territories in the eastern provinces of North and South Kivu from rebels, while ensuring security for the local population has been extended to September. But Congolese women are arguing for changes in the conduct of military operations. 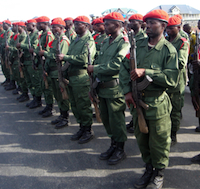 FARDC troops on parade: activists fear continuing efforts to drive out rebels only intensifies violence against civilians - even by the army itself. Credit: Eddy Isango/IRIN

Amani Leo, which means “peace now” in Swahili, was designed to overcome deficiencies in previous military actions against groups such as the FDRL (French acronym for the Democratic Forces for the Liberation of Rwanda, composed mainly of militia who carried out the 1994 genocide in Rwanda), during which rebel groups – and some government soldiers – committed atrocities against civilians.

“The name of the military operation has changed, but the situation remains the same: women are still being killed, maimed, abused like animals,” said an indignant Immaculée Birhaheka. Birhaheka is the coordinator of the Congolese non-governmental organisation Promotion and Support for Women’s Initiatives.

“In the ward that we created for female victims of sexual violence at the Panzi Hospital in South Kivu, we still see women coming in from different neighbouring provinces.”

Father Jean-Bosco Bahala, the general rapporteur for the national peace accord monitoring committee, says MONUC and the Congolese army have put measures in place to reduce the risk to civilians.

“There are public education campaigns before each attack. In addition, a protection buffer is put in place to prevent reprisals by the rebels,” said Bahala in an interview with IPS.

The Congolese army includes many former militiamen who have been absorbed into the army as accords have been reached with warring factions; many of these former rebels continue to have a culture of violence.

MONUC has set up a training program to counter this, but Birhaheka told IPS that there is no doubt that some soldiers continue to commit atrocities against women: "The soldiers who run the operations do not receive the necessary training on how to behave with women. They continue to rape, loot, kidnap civilians."

For Bob Kabamba, professor of political science at the University of Liège, Belgium, the atrocities committed by the army are also the result of a lack of logistical support: "Most soldiers are not paid, do not eat well and are forced to help themselves to crops, plundering and committing atrocities against civilians."

The NGO Women Initiatives for Gender Justice is pressuring MONUC to extend the training, which is currently available to only a portion of the battalions, to all the armed forces.

It's asking of the Congolese government that Operation Amani Leo's zero tolerance policy for sexual crimes be strictly applied to army officers who are convicted of violence against women.


Yet since the beginning of April, several villages in North Kivu have been attacked by FDLR. Father Bahala told IPS that several women were abducted during these attacks. Cases of violence against women still exist in conflict zones, he says, but the violence has generally subsided in those places where the army is ensuring the population’s safety.

Katana Gege Bukuru, secretary general of the NGO Women Activists United for Human Rights, is less positive in her assessment of the safeguards. “It is true that once armed groups begin to fight, MONUC intervenes to establish a  cease-fire. However, civilians still die since battlefields are often near villages.”

According to a spokesperson for the U.N. High Commission for Refugees (UNHCR), 1,244 women reported being raped between January and March 2010 across the DRC. These figures are generally believed to represent a fraction of total assaults. More than a third of these rapes were committed in the provinces of North and South Kivu.

“It is difficult to identify the perpetrators of rape,” Bukuru explained to IPS by phone from Bukavu. “Sometimes they wear uniforms and weapons for camouflage. So we do not know if they are rebels, members of the Armed Forces or civilians.”

Kabamba says that some soldiers who commit acts of violence against women go unpunished, including high profile figures like General Bosco Ntaganda. The former rebel commander of the National Council for the Defence of the People (known by its French acronym, CNDP), is the subject of an international arrest warrant for crimes committed in Ituri Province, but continues to serve in the FARDC in South Kivu.

According to Kabamba, lawsuits have been filed against certain officers, but the abuses are so widespread that the DRC cannot afford to prosecute everyone.

“There are two or three thousand soldiers operating in South Kivu. Hundreds of them have committed atrocities. Taking action against these abuses would be tantamount to arresting the various groups of FARDC in South Kivu who are currently conducting various military operations.”

The legal arrangements put in place by MONUC and the government now provide women with the opportunity to sue their attackers.

Bahala says that thanks to psychological support and rehabilitation programmes, reporting rape is becoming less taboo. As a consequence, raped women are less afraid of being ostracised from the community and are more willing to denounce their attackers.

But, according Bukuru, many women are still afraid to come forward.

“Some rapists are arrested and imprisoned, awaiting trial. However, most of them go unpunished. The legal processes are time consuming and often the victim does not dare denounce her attacker. They live in the same village and she’s afraid of retaliation,” she said.

“That’s why we try to help these women. But we lack resources, especially for us to travel, go meet them women, pay for the medical care they need, lawyers… We would like MONUC to help us financially. Above all, we would like MONUC to use ‘soft diplomacy’ and begin negotiations with the rebels.”

Committed to winning the war

But for Kabamba, stopping these operations would amount to entrenching impunity: “The FDLR and other rebel groups are seen as having succeeded in defeating the counter-insurgency being waged against them. These groups are committing atrocities against civilian populations with the goal of being denounced,” he says.

“They try to involve the press and international organizations, so these can pressure the Congolese government to put an end to ongoing operations in North and South Kivu.”

The DRC government is seeking to redefine MONUC’s mandate.

“Tthe situation has significantly improved in the country. There is no reason to maintain a response of this size from MONUC, which at the moment is present not only as part of Operation Leo Amani, but throughout the whole country,” says Bahala. “We want the government to take responsibility, and it can not while in a situation of permanent dependence.”