TSHWANE, South Africa, Sep 16 2010 (IPS) - After being diagnosed HIV-positive Margaret Bikyele could not even manage the simplest of household chores, let alone being able to work to generate an income for her and her two sons. 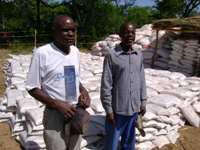 Since her diagnosis in 2005 and in the years that followed, the Bikyele family’s prospects in life had looked bleak. That is until Bikyele became the recipient of a social cash transfer scheme in 2007 and began receiving 10 dollars a month.

The small amount of extra money made a world of difference to Bikyele. It meant that Bikyele, who is from Lilongwe, Malawi, could now pay for transport to the nearest health centre to receive free antiretroviral therapy. The therapy has greatly improved her health and she once again has the strength to work and support her family.

And now her sons can attend school as well. “The cash transfers have renewed my hope in the children’s future. In the past I could not (afford to) send them to school. Today I am able to send my kids to school with food in their stomachs, and books in their hands. I know that with proper education they will be fine,” said Bikyele of her children’s future without her.

And with an estimated 15.2 million children worldwide having lost one or both parents to HIV/AIDS to date, social protection is one of the solutions that has shown to make a difference in their lives.


While the world prepares to take stock of the Millennium Development Goals (MDGs) at the United Nations meeting on MDGs on Sep. 22, development and research organisations point out that small cash transfers are making a big difference for poor and vulnerable groups.

But only a few Southern African countries will be able to halve extreme poverty, according to the Regional Hunger and Vulnerability Programme (RVHP). The organisation says social cash transfers remain the last window of opportunity to eradicating poverty when other programmes have failed.

The RVHP, together with the Southern African Development Community Parliamentary Forum (SADC PF), and the Studies in Poverty and Inequality Institute are co-hosting a high-level policy dialogue on Eradicating Extreme Poverty and Hunger in Southern Africa in Tshwane from Sep. 16 to 17.

The two-day dialogue will look at the role of social protection as a way of eradicating extreme poverty ahead of the U.N. meeting on MDGs.

According to the coordinator of the Grow up Free from Poverty Coalition, Angela Penrose, one criticism of social transfers has been the general feeling that giving cash causes dependency and that people will misuse it.

“We are finding (that) evidence is increasing all over Africa that small injections of cash really make an incredible difference, not just to individuals, but to the community and the economy as a whole,” Penrose told IPS.

“Why shouldn’t people be able to use money intelligently to buy food, help their children get to school, get on the bus, buy good clothes (and) get a job?”

Penrose said small amounts, varying from 15 dollars to 25 dollars a month, have been proven to make an impact on communities, especially on vulnerable groups such as children with HIV/AIDS and the elderly.

According to RVHP, South Africa and Lesotho have succeeded in helping their citizens out of hunger and poverty using instruments such as old age pensions and child grants believing small regular amounts of cash in the hands of the poor can made a huge difference.

In South Africa, the government introduced the Child Support Grant of about 28 dollars, which is given to any adult who takes care of a child under the age of 14 years. The country’s Foster Care Grant is given to foster parents and the Care Dependency Grant is for people who care for children who have disabilities, are seriously ill and need special care all the time.

The Lesotho Old Age Pension has helped address chronic poverty and vulnerability in the country because it reached all citizens over the age of 70. The high number of HIV/AIDS-affected children living with older people who did not have a secure income motivated the introduction of the pension in 2004.

“While cash transfers alone are not the solution, they can be an important element of an overall care package for children,” A 2008 Working Group Report on Social Protection for the Inter-Agency Task Team (IATT) on Children and HIV and AIDS said. The report highlighted that regular, predictable cash transfers can have a long-term positive impact on children affected by HIV/AIDS as well as on families.

“Up until now, the MDG initiative has been running for 15 years and to this day only two of the 13 Southern African states are likely to achieve the first MDG – which is to halve the level of extreme hunger and poverty. And those are South Africa and Zambia,” RVHP director, John Rook, told IPS.

“The question is not really if this will happen but when it will happen. And the challenge we have at the moment is to make that process happen today (rather) than tomorrow.”